It was a hot one down at St. Thomas Sports Park for one of the final open practices of the 2013 training camp season. What did we learn? Let's take a look.

Today's practice featured a lot of special teams drills and I won't focus on it since there really isn't anything new to share with one big exception. The same guys appear to be in the mix even though I thought Jalen Parmele might get some work there. The unfortunate news in that department is that wide receiver/returner Marc Mariani has a bone bruise in his shoulder and will miss a couple of weeks. It is unlikely he will make the roster. Rob Bironas is expected back in about a week's time. 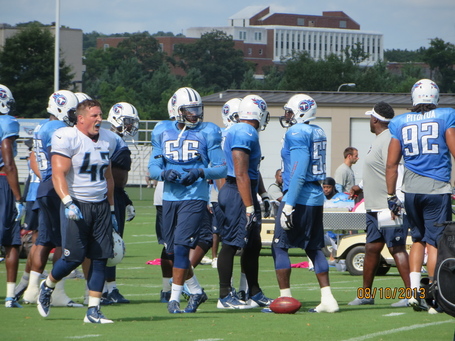 Let's talk about the defense and I want to start out by talking about something interesting that happened today when there Titans were in team drills. Jerry Gray came down to the sidelines and basically stood in front of me for about 20 minutes. I quite unashamedly listened and watched him. I also took this  vine of Jerry Gray.

Anyway, Gray had a walk talkie and was talking to Gregg Williams a bit and from the sounds of things Williams is working a lot with the linebackers. I won't go into to any specifics but at one point Williams did give Akeem Ayers an earful and pulled him off the field. He only stayed out a couple of plays. 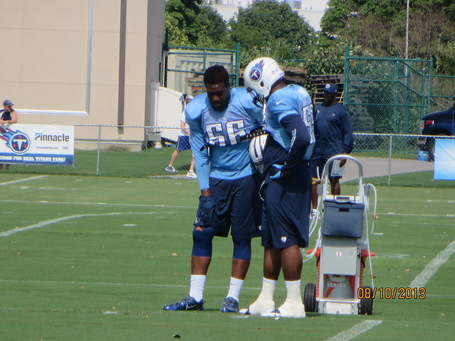 Now I don't know any details on how things are distributed but it sounded to me like Gray was the one in charge overall while Williams was working hands on with players. It makes a ton of sense for him to work with linebackers as that was where he initially made his coaching mark. From my very limited view during these camp practices, the job distribution seems to be going well and I haven't seen any signs of discord. 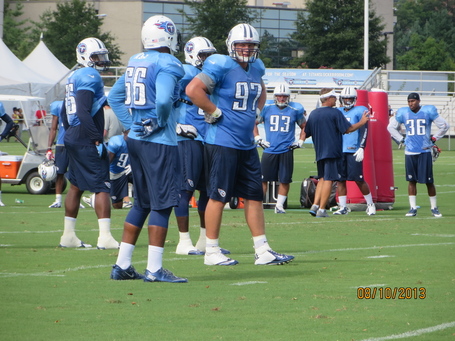 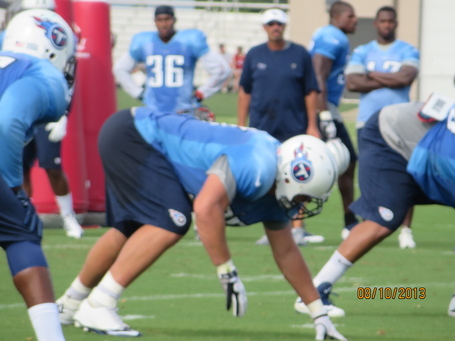 More on the defense and in particular the defensive line. There is still much rotation there and guys playing in different spots. Karl Klug continues to play inside as well as outside and man he had a beast of a game Thursday night. I would almost call him a lock at this point barring injury. 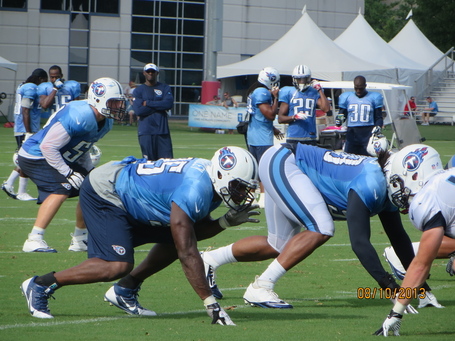 Kam Wimbley played some outside linebacker today and was in the backfield pretty quickly. Lavar Edwards continue to develop and he notched his first NFL sack Thursday night along with a tackle for a loss. Really loving that pick. Derrick Morgan was very active Thursday night and is getting a ton of reps in camp. I look for a big season from  him. 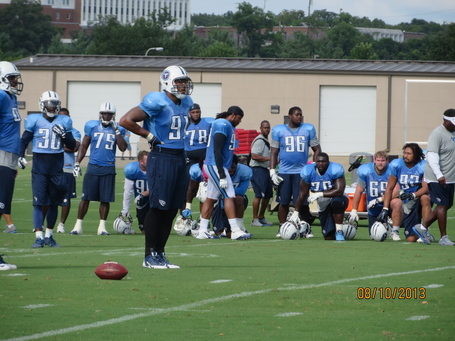 One of the best moments in practice today came in drills between the wide receivers and defensive backs. Jason McCourty was on Kenny Britt and Britt caught a pass on him. There was some friendly trash talk between them and JMac kept telling Britt he can only complete passes while pushing off (he did). The next matchup Britt caught a pass fair and square and heckled him pretty good but he took it all in stride. That is really a fun matchup to watch in camp. 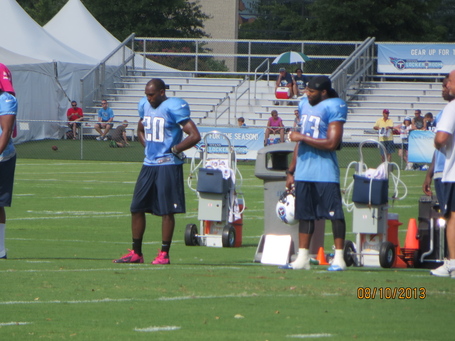 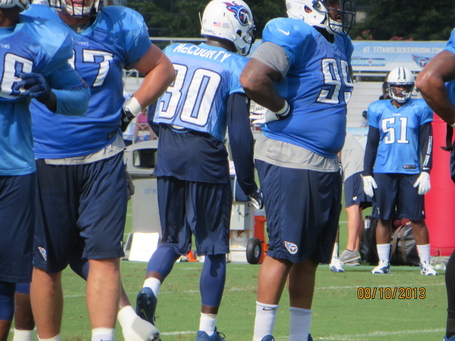 Verner had some really nice plays and broke up a pass in coverage. I have to agree with those who say Verner has the inside track on the right cornerback spot. Campbell makes some plays and he intercepted a Jake Locker pass. I vined it so I will update if I can identify the target. Still, I saw Michael Preston put a move on him in drills to turn him around to catch a pass. Campbell flashes but I don't see him winning the starting right cornerback job unless he makes a big push. I am really loving the improvement I am seeing from BW3. 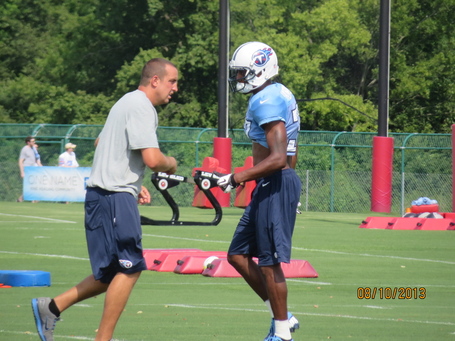 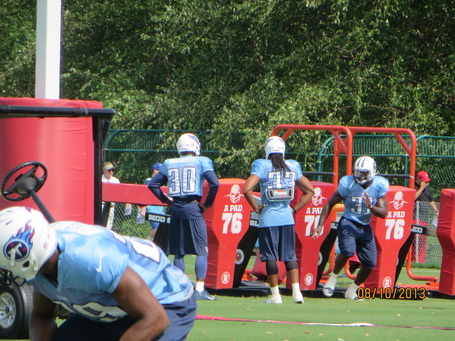 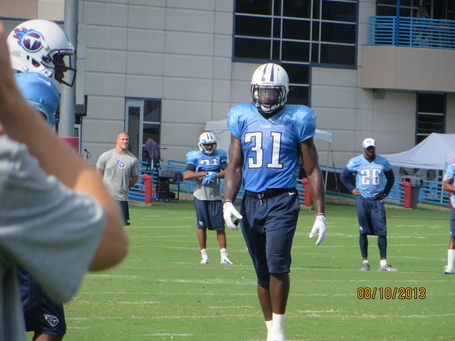 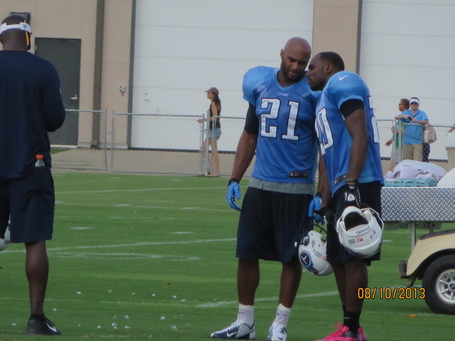 I haven't talked as much about the safeties as I should and obviously Bernard Pollard is what you thought and then some. He is incredibly fun to watch and listen to both in practices and at the games. He has brought an attitude this team sorely needed. I haven't paid as much attention to Griffin as I should and I will definitively do that and talk more about him. George Wilson comes in at safety in 3 safety packages and gets a lot of playing time on special teams and with the 2nd and 3rd team. He just makes plays and today he intercepted a Fitzpatrick pass intended for Justin Hunter who was late playing the ball. This is his second interception in training camp I believe. 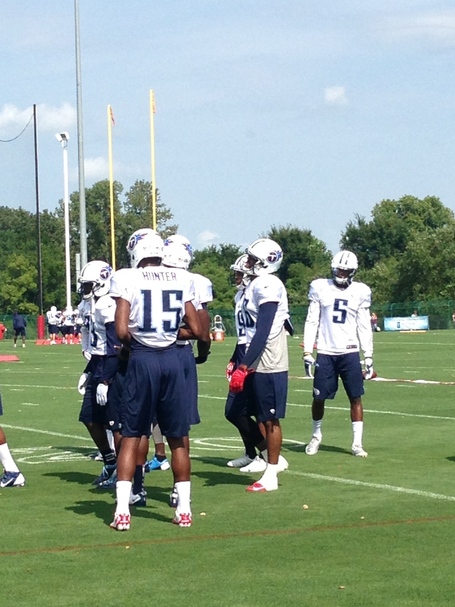 Speaking of Hunter, the rookie shows flashes of the incredible talent he possesses but he is still incredibly inconsistent. He is showing growing pains that you hope he will outgrow as training camp winds down. Nate Washington had an incredible one handed catch and just keeps on making plays. I said it before and I will say it again but Nate the Great will be a Titan in 2013. 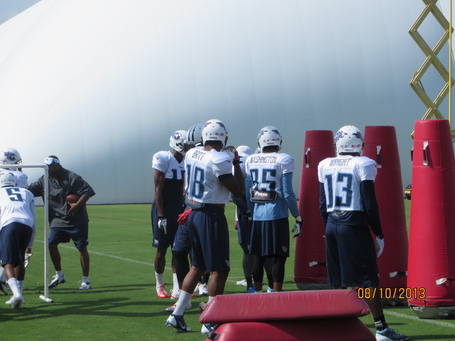 Kenny Britt left practice and came back with a sleeve around his elbow but Jim Wyatt reports he got an IV. He looked fine to me but the Titans might back him down and give him a break tomorrow. This would not concern me. Kendall Wright had some nice catches today as well. Dontel Watkins had an incredible catch in drills. I wish there was room for him on this roster. Justin Hilton had an absolutely incredible catch in practice as well. I wish I had caught that one on vine it was awesome. 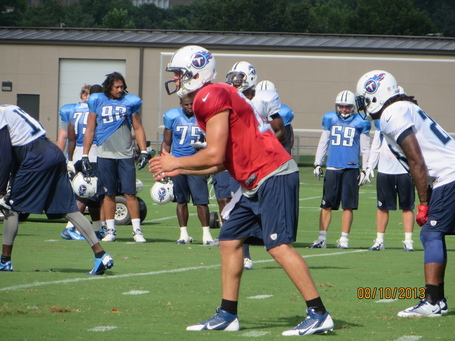 Despite the pick six which I am going to find and review, I thought Locker was sharp today. He rolled out just a tiny bit, moved around and then pump faked and threw a beauty to Taylor Thompson that would have been a nice gain. He also looks much more comfortable to me operating  under center and I could be wrong but I thought he did that a lot more today. 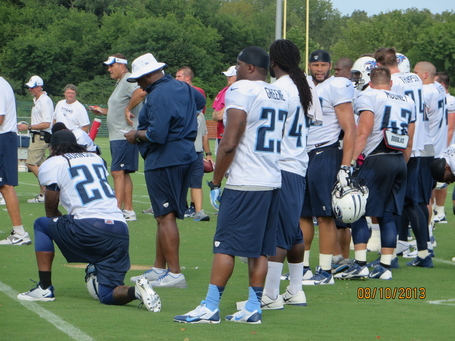 We got to see what Chris Johnson can still do Thursday night and Shonn Greene is going to fit in perfectly with what the Titans want to do. It sounds like Jackie Battle is going to get more playing time which I like he has been an absolute beast. I admit I wasn't a fan of bringing him in but I was wrong and he really is doing well. I am also going to go on record saying Quinn Johnson will make this squad. He is having an excellent camp and preseason. 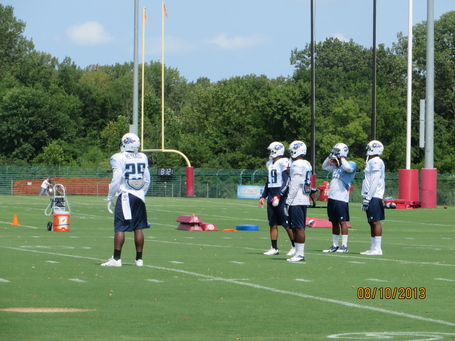 It is going to be interesting to see how many running backs the Titans carry this year. Reynaud and Damian Williams would appear to be the favorites to win the returner position. I should mention Williams is having a fantastic camp and preseason. He's a good player. 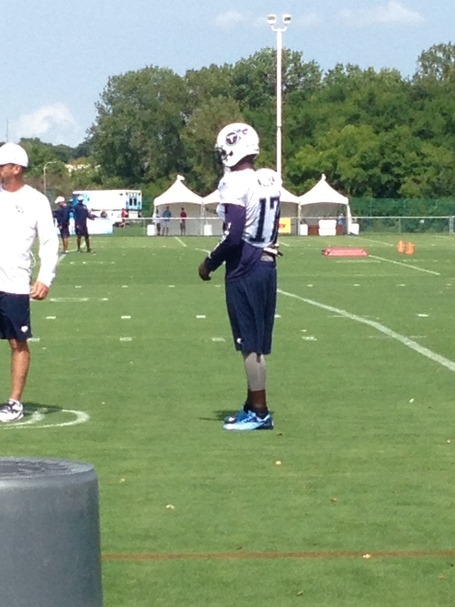 The only serious injury appears to be Marc Mariani and that is unfortunate. I haven't heard any word lately on Kevin Walter but I don't see him making the final cuts. The competition is too strong at wide receiver. Markelle Martin didn't practice today and I haven't heard much about him but he was on the field and it didn't look serious. Probably just resting him since he played a lot Thursday. It sounds like Schwenke is close to coming back he did individual work today. Sammie Lee Hill got a day of rest today as well.

Be sure to check my vines from today's practice. Also, you can find my photographs here. Let me know if you have any questions and I can promise you I will tweet more from tomorrow night's practice. If I find any other items of interest I will be sure to update this post.