Greetings from rainy St. Thomas Sports Park! Let's talk about some offense shall we?

Despite a drenching downpour, the Titans practiced before a rather rain drenched sparse crowd including yours truly! I think it's safe to say the offense got the better of the defense tonight although the defense did make some plays. At least twice a defender knocked a helmet off an offensive player. This recap will be a bit shorter because there was some specials teams work and Munchak cut the practice short by 30 minutes.

First, and I don't think I really have talked about him much but Chris Johnson had the defense's number tonight. He ripped off a few really nice runs. CJ looks to be in good shape and with the new additions to the offensive line we can hope the running game is far more consistent in 2013. 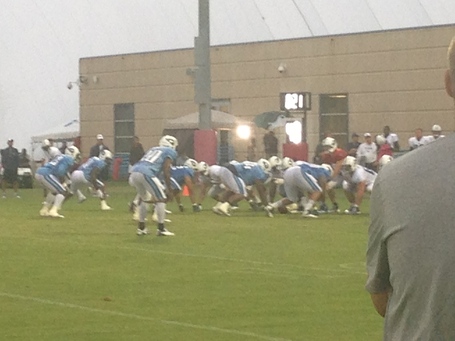 The Titans are rolling Locker out more which is good to see and as Jimmy Morris has reported, they showed some read option tonight. Locker looked sharp overall tonight and appears far more comfortable in the new offense. Locker connected with Britt for a couple of really nice plays tonight. 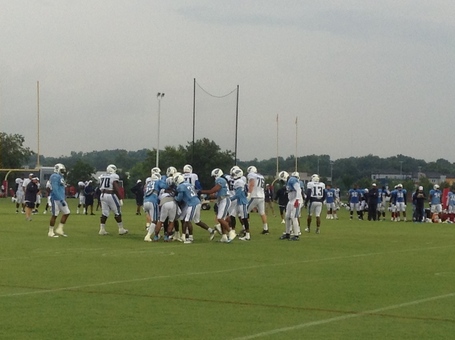 Chance Warmack did make an appearance on the field tonight. His belly looks as beautiful as ever. Brian Schwenke and Barry Richardson did not practice and it sounds like Schwenke is out the rest of the week. I watched Big Country Stewart a bit and he seems fine to me. In fact, both tackles looked good to me. 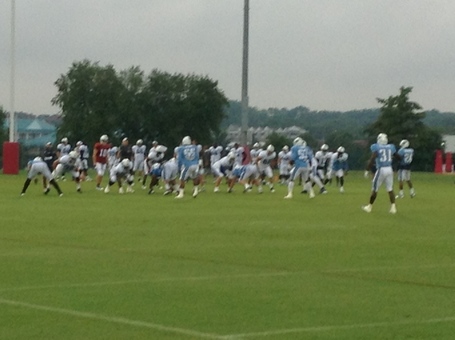 On defense, Moise Fokou continues to run with the first team defense. From my observations, it appears he and Bernard Pollard are calling the defense. It is going to be interesting to see who wears the defensive mike come preseason. All the linebackers look good but I have to say Akeem Ayers has really been all around the ball. He caused a fumble tonight that the defense recovered.

I do want to say a bit about Zaviar Gooden as I spent some time watching him too. He is as fast as advertised and although he isn't getting snaps with the 1s you can still see the talent on the field. I didn't mean for it to sound like I was knocking him before as he is a really nice player. I think given some time he will work his way into the rotation and will be soon making plays. 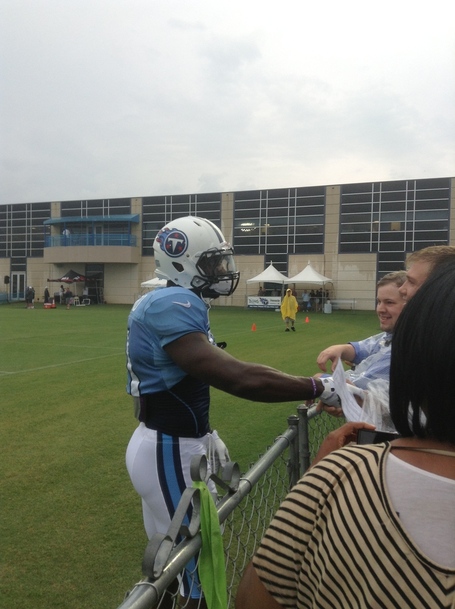 Speaking of Bernard Pollard, he came over to the fans before practice and went down hugging and shaking hands thanking the fans for showing up in the rain. Alas, I did not get a hug only a handshake. From reports, it appears other Titans did the same following practice as well. Kudos to them!

The Titans played Ripota Pituitua quite a bit tonight although Kam Wimbley was dressed and did practice some. I like Pituitua and he seems to be settling in. I am going to watch him some more but I just don't think the defense is the same without Wimbley on the field. 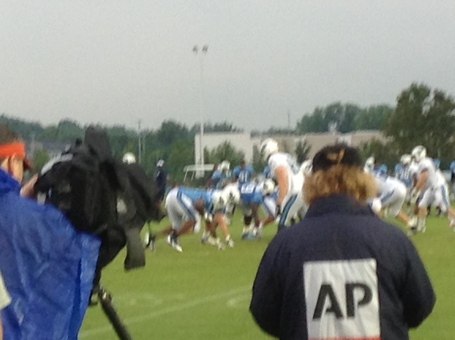 Keyunta Dawson tipped a pass tonight and it really making some nice plays. Its going to be hard to keep him off the roster. I continue also to be impressed with Lavar Edwards and I'm not alone. Several fans in the crowd around me were commenting favorably on him. He has some moves and is pretty quick for a big guy. I am really anxious to see him in preseason.

That's it for now and if I think of anything I will update everyone. Just a reminder you can find my photographs here and I live tweet the practices so follow me on twitter at @SportsBySharona if you are so inclined!