I doubt this will be part of a series, but I thought this might be an interesting community exercise.

Share All sharing options for: Titans Film Review: What's Wrong with This Picture?

Below are two image stills. In the comments, discuss what is wrong with these images. I'll edit the post later with my thoughts.

Edit: Thoughts on the play below. 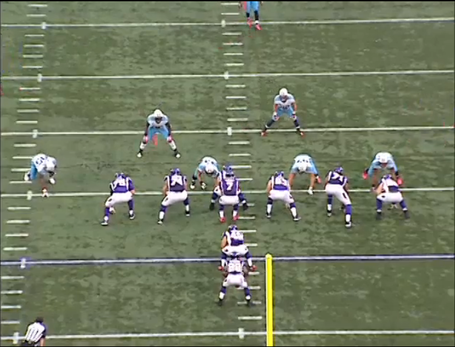 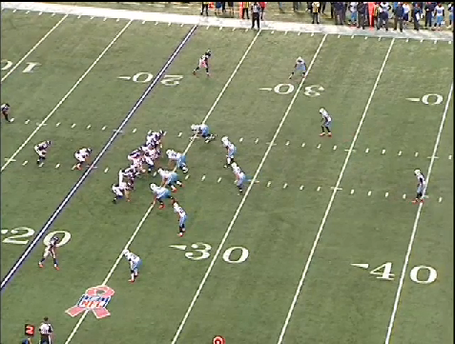 I can't tell who that is to McCarthy's left, but do we have 5 DBs on the field with the Vikings in the I?

Lol, 6 in the box, and the Vikings have a TE and a FB. They have numbers to the strong or weak side.

Both of these help sum up the majority of the problems, but I've got some more thoughts below.

(h/t) Football Outsiders for the image

Football has a handful of non negotiable rules that will influence success. One of these is simple numbers. If one team has more players where a play is run, then they are better off than the opponent. At a minimum, you want to be able to match the number of players you're up against. Fairly obvious concept, right? It's interesting how often these basics seem to get overlooked, even at the professional level.

In the run game, another way to view this principle is gap responsibility. See the image above. These are all potential gaps the running back can run through. If all these gaps are accounted for, the running back has no where to go (assuming you can make the tackle). The diagram above basically outlines the formation that we see the Vikings line up in up front. So, from left to right, you've got the C, B, A, A, B C, and D gaps to account for. That's 7 gaps. While we technically only have 6 guys in the box, the Nickel corner (Mouton) is just outside the box. He'll account for the D gap as the force player to that side of the field. So, we're fine, right? Of course not.

You have to consider the full back as an additional blocker. Offensive coordinators love full backs in the run game because it's a moveable chess piece. Wherever the full back goes to block, an extra gap is created. Using the example above, the run is through the strongside A gap. This gap is accounted for my Colin McCarthy. But, consider what happens when the full back leads through that hole. The full back is now an extra blocker and, instead of just one gap, there are now two - one one on either side of the full back.

So, what are the issues above? First of all, we're in Nickel against "21" personnel on 2nd and 9. There's no reason for this against a team like the Vikings. Second, 8 guys should be in the box here. Just using simple math, there are 8 men on offense you have to account for (9 if you count the quarterback - which you really don't on a run play*). We're out numbered. We've technically got 6 guys in the box (but functionally 7...Mouton is close). Moreover, one of them is a Nickelback. Barring a spectacular individual play by someone on our defense, this situation will never end well.

*This is what makes a mobile quarterback so dangerous. An additional defender must account of them, where as that defender is typically allowed to be used by the defense as pursuit of the running back.

The result is like stealing. The Vikings call a lead draw. This allows both DTs and Ends to get up field a little bit. Ponder then hands the ball off to Peterson who follows his right through the hole. The FB takes on McCarthy, who's in a horrible bind in open space. From there, Peterson runs to daylight, and makes Griffin miss at the second level (though, in Griffin's defense, I don't think many safeties make this play).

I'm cautiously optimistic that Gray and Williams can manage each other's strengths and weaknesses this next season. Regardless of the creativity they can produce, fundamentals must be accounted for. The goal as a coach is to optimize the environment for your players, and then let the players play. The play above does just the opposite.