Just briefly on the offense, Jake Locker has recovered from his initial poor showing and has had 2 pretty solid practices over the weekend. Kenny Britt sat out tonight, and as I predicted Marc Mariani did not practice but was there in his jersey and shorts. Justin Hunter really looks good though you do see some rookie things like you would expect. The veterans seem committed to making sure he is going to be ready when the season rolls around. 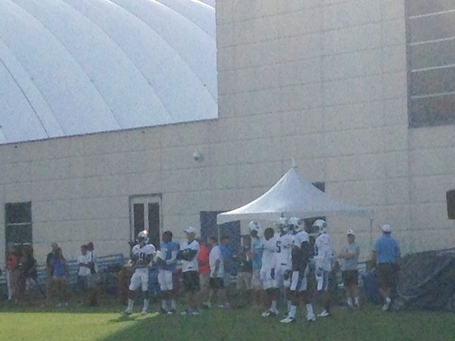 There are several wide receivers competing for spots in the return game. With Mariani not practicing, Damian Williams, Dontel Watkins, Rashad Ross Diondre Borel are putting in work catching punts and kickoffs trying to be the guy who earns the job. I have to say Damian Williams is quietly having a very nice camp already. I thought Borel and Ross did well. Having said that, the two guys not named Hunter and Preston who have made the most impression on me are Watkins and Roberto Wallace. Both are big guys who move well and have nice soft hands. They both looked comfortable in the return game as well.

Darius Reynaud is in the mix too and he has looked much better than I thought he would in the run game. I watched Shonn Greene closely for a bit and he is just a barrel chested guy and appears to be in nice shape. He had a couple of nice runs tonight. Jake Locker took off a few times as well and for the most part picked up some nice yards.

The Titans practices in full pads this evening and as promised, I did my best to focus on the trenches, particularly the defensive line. In linemen drills. So let's talk in some detail about what I saw. First, let me say that Mike Munchak was heavily involved in coaching the offensive linemen but he was also very involved with the defensive linemen as well. That drill was very fun to watch and there were a few heated moments but the guys quickly shook them off. 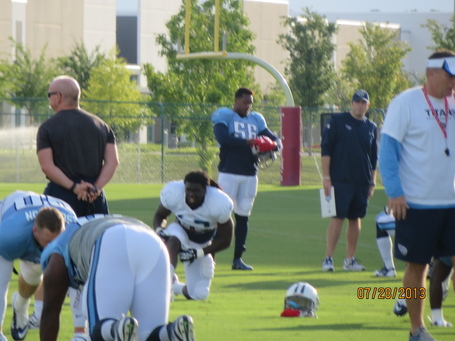 One very interesting note is that Akeem Ayers spent some time with the defensive linemen and lined up at least once with his hand in the dirt as an edge rusher. I didn't see him do it in team drills but that is something I will keep my eye on.

Also, from linemen drills and that is Kam Wimbley looked fantastic. Coming off the ball fast and showing some smooth moves to beat the offensive lineman. As the season went on last year he got more comfortable with his hand down and he sure seems comfortable now. I believe I said this before but Derrick Morgan is noticeably leaner and looks a bit more explosive.

In team drills, the defensive linemen rotated around quite a bit. We did get to see Karl Klug line up at defensive end and on both sides of the line. I thought he did okay and he had some good moments. Still, if he is going to be successful at the end spot he has to get a better burst off the line. He isn't getting off the ball quick enough. 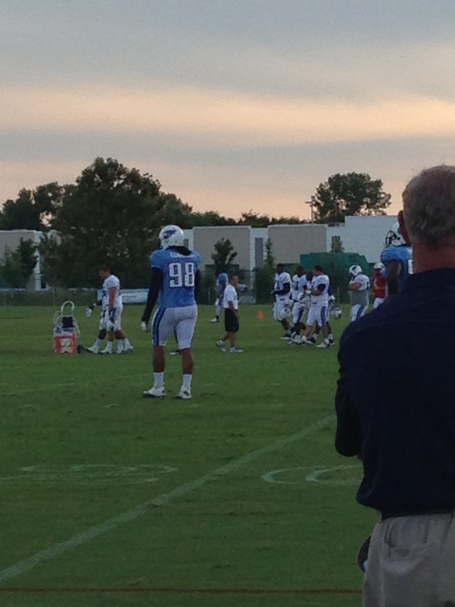 Lavar Edwards is a big guy but he moves very well for his size. From what I saw, he lined up primarily at left defensive end. He and Keyunta Dawson made some nice plays and they both got into the backfield quickly a few times. I didn't see Edwards play inside any but I will keep an eye out for that as he certainly can.

Kam Wimbley and Derrick Morgan at different times lined up on both sides of the line. I could be mistaken but I thought I saw Morgan line up inside as well. I took an in depth look at the defensive line in June and predicted the Titans could do this with them both. 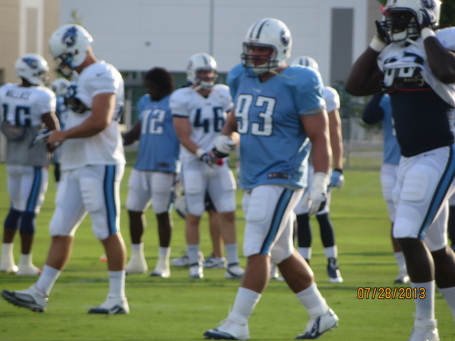 Sammie Lee Hill is a big guy who almost looks like a nose tackle to me. He has really quick feet. Mike Martin is like a bowling ball out there. He got a ton of special team work tonight. Jurrell Casey looks to be in great shape. I hear Stefan Charles is getting some good press but he just didn't stand out to me. I will try to watch him more closely on Tuesday.

Rookie center Brian Schwenke got the night off for his pulled hammy but it doesn't sound serious. I like what I have seen from Mike Otto so far and he certainly doesn't back down from a fight. The competition between the linemen in drills was fierce and it is only going to make the team that much better. There really haven't been any offensive linemen who have stood out but I think this is a good thing. Usually they only stand out when bad things are happening. 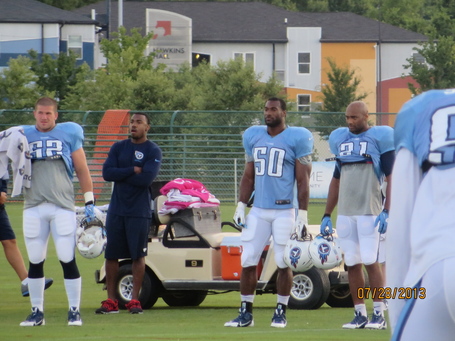 Moise Fokou continues to run with the 1's but Colin McCarthy is out there making plays and looks to be healthy. They did interchange them a bit more tonight and it wouldn't shock me to see McCarthy running with the 1's next week. Both Ayers and Brown look good and Ayers tipped a Ryan Fitzpatrick pass. I am certainly not knocking Fokou at all as he has played very well in camp. Rookie linebacker Zaviar Gooden is on the field but so far isn't standing out much. 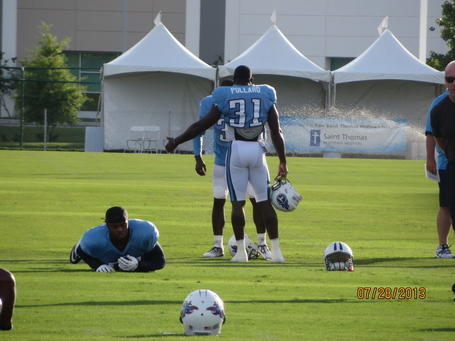 I have talked a lot about what Bernard Pollard brings and the safety position is shaping up nicely. Pollard batted down a pass tonight and is just all over the place. I like what I see from Khalid Wooten. Coty Sensabaugh is having a solid camp so far. BW3 is coming along nicely. Still, I think the best corners remain JMac and Verner though Sensabaugh is giving them a race for their money. The corners are playing a lot more press and man coverage and that is great to see. 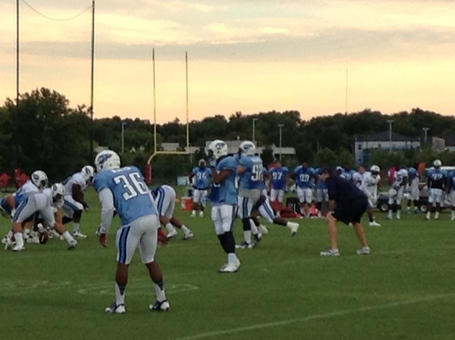 Overall, the theme of the defense is exactly what you would expect and that is swarming and aggressive. This team has a swagger that was sadly missing in 2012. If what we see in camp translates to on the field play during the season the Titans should win a lot more games.

The Titans are off tomorrow and the next open practice is Tuesday, July 30 beginning at 6:30 p.m. and I will once again live tweet the practice so follow me on twitter at @SportsBySharona if you want live updates. You can find my training camp photographs here.