There was a lot of action from today's practice, including a fight (!!) so let's get to it.

Share All sharing options for: Training Camp Recap for July 27, 2013

This is easily the most competitive team I have seen the Titans field in a long long time. That competitiveness is showing not only in individual battles but in team drills. Things got a bit heated culminating in a full team fight that was started by a scrum between Michael Preston and Michael Griffin.

Jake Locker had a vastly improved practice today. It was nice to see him out there looking comfortable and making some nice plays. Again, he took off and ran on a play where nothing was there and picked up some good yards.

Once again the wide receivers were the talk of the practice. So far, Michael Preston has been easily one of the stars of training camp. Not to be outdone, Justin Hunter had a very nice practice. Very nice indeed! He really looks good. 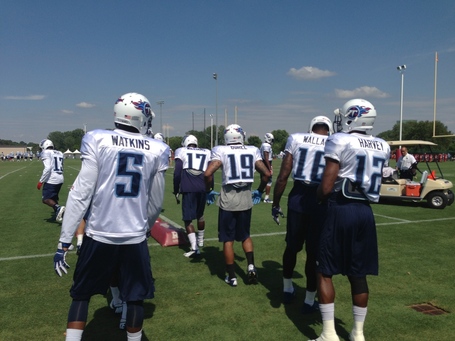 I am also very impressed with Dontel Watkins. He is 6' 2 and 201 and has really good agility and speed. He looked fluid going through cone drills and made some really nice catches. He is definitely a guy you should keep an eye on as he can play the game. I am anxious to see him play in preseason. Kenny Britt again had some disappointing drops. 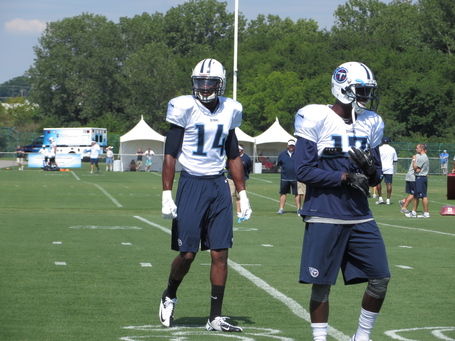 I know I said it yesterday but the conversation around me in camp today only reinforces that the wide receiver battle will be the talk of camp. EVERYONE was talking about how good they look and how much depth they have at the position. I always thought a trade was a long shot but it's certainly starting to look like a trade could happen.

One very interesting note is that at least once they had Taylor Thompson motion to a receiver position. Thompson is having a nice camp. Craig Stevens caught a little dumpoff and picked up some nice yards for what would have been a first down play. 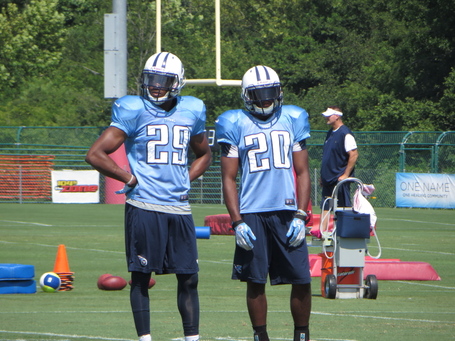 A side benefit of the great group of receivers they have is that the defensive backs are really being challenged. The Titans indicated prior to the draft they were looking for press corners and indeed I did see BW3 line up in press coverage. Overall, the defensive backs are jamming more at the line and challenging the receivers. I have to give the battle to the receivers but Tommie Campbell did make a nice play to break up a pass to end practice today. 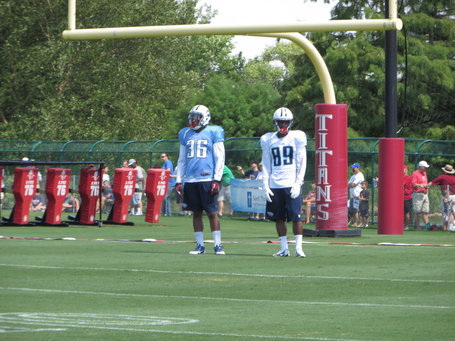 More on the receivers, and that is it appears Damian Williams is going to get a shot at the return game. Marc Mariani came up lame in today's practice and was limping visibly at times. Mariani is a great story and from all accounts a great guy but I will be shocked if he is on the field tomorrow. Rashad Ross is also getting a shot at the returner position as is Khalid Wooten. 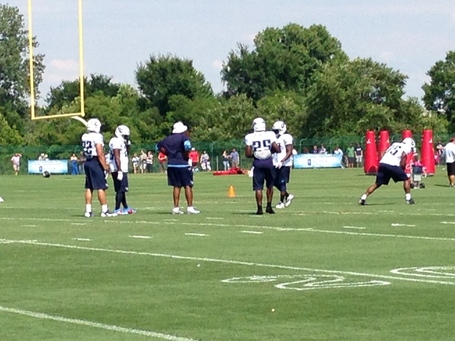 I thought Shonn Greene looked a little heavy but when I saw him again I just wasn't as sure. He is definitely not a small dude from the waist up but he did bust a nice run. Reynaud has had a few really nice runs and he also has been used in the passing game. Nice little camp so far for him. Battle made some nice plays as well as did Jalen Parmele. Lots of guys getting some good touches to try and sort through the competition. 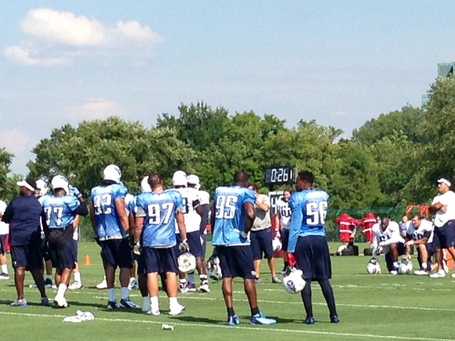 I think I am going to be far more impressed with Pitoitua than I originally expected. Full pads go on tomorrow so my recap will be heavy on the trenches. Also, I did note that Kam Wimbley looks to be going with one hand in the dirt. Last year he experimented some with his stance as he just wasn't used to putting his hand down. He looks very comfortable doing it in camp this year. 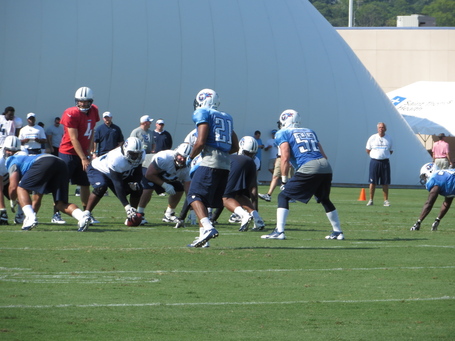 Moise Fokou is again running with the ones but there is a lot of fluidity with the linebackers. That is another area I am going to focus on tomorrow with the full pads. I am pretty sure I saw Akeem Ayers lined up as an edge rusher at least once which is what I fully expect the Titans to do more with him this year. All the linebackers look good right now but full pads will tell the story. 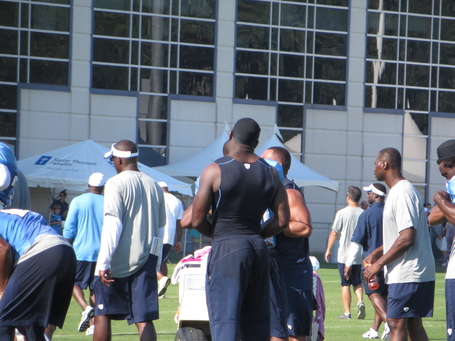 Finally, I think there is absolutely no question but that Bernard Pollard has become the leader of this defense. At one point you could hear him yelling at the defense from the sidelines. Between Pollard and Gregg Williams, this team has become infinitely tougher and more physical. There is no question in my mind but that this defense should be greatly improved.

That's it for now but again I will be going through photographs and will likely update once I have fully processed my thoughts from today. You can find my photographs from today's practice on my photobucket page. I will be again live tweeting practice tomorrow so feel free to follow me on twitter @SportsBySharona. Hope you enjoyed!