The Titans held their first open practice of the 2013 training camp today. Which players stood out as they played for the first time this year in front of their fans? Let's take a look. 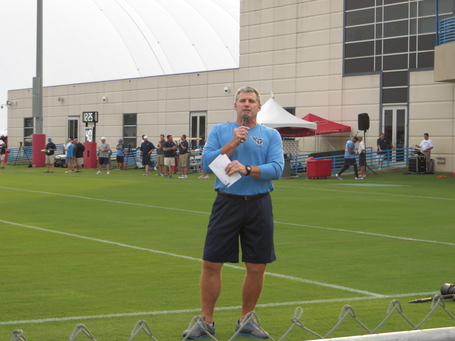 Hello guys and gals! I have been going to Titans training camp for years and writing about it since circa 2007. This year I am super stoked to be writing for Music City Miracles and posting my training camp updates here. I will also post tons of photographs on my Flickr and Photobucket accounts. Finally, I usually live tweet the practices and post photographs so follow me on twitter @SportsBySharona if you are so inclined! 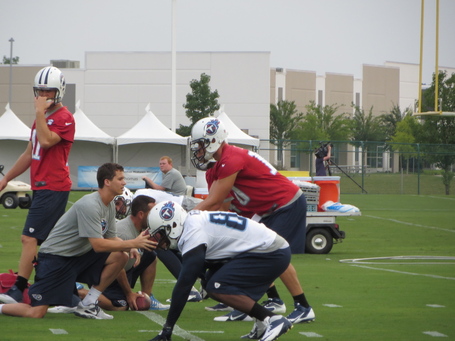 I know Locker is kinda the big story so let's start with him. I'm sad to say it was a mixed bag. He looked good at times and at other times well he just didn't. There were some nice completions one particularly to Taylor Thompson. He did roll out some and one time he did pull the ball down and make a nice run for a good gain on what did not look like a designed run play.

I think Locker just tries too hard at times. It's easy to forget hasn't started all that many games and the game is still slowing down a bit for him. One positive I did note is that Locker's throws have some nice zip and a good tight spiral. He threw some down the field which was an issue as his injury progressed last year. He does look like he has recovered from his left shoulder injury.

Fitzpatrick and Smith got some work of course and made some nice throws. Fitzpatrick did have the ball knocked out of his hands in team drills. While it is so hard to tell in training camp, and these guys are in shorts now, I thought Rusty Smith had the best night and he looks more like an athlete to me now than he ever has in the past. 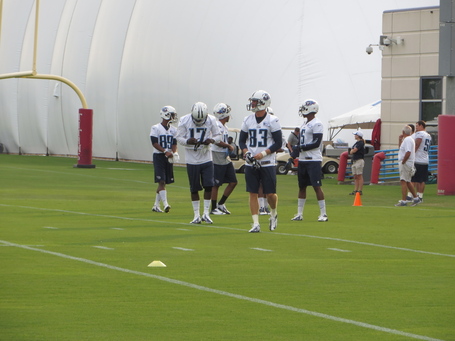 I suspect the wide receiver battle is going to be the talk of the camp this year. The Titans have the best wide receiver group I have ever seen across the board. Marc Mariani looks to be recovered from his injury and made some nice plays. Kenny Britt dropped 2 passes in individual drills but I did not note any lingering knee issues from the past 2 years.. Michael Preston really stood out tonight. He looks good.

[UPDATE] I did want to talk a bit about the running backs and didn't last night so I am updating this morning. Shonn Greene was dinged up on a play but it doesn't appear to be serious. I thought Darius Reynaud had some really nice runs but again they are playing in shorts. The fullbacks are out there competing hard I suspect they know they have to bring skills other than blocking to table to make the team.

I also thought Dontel Watkins and Roberto Wallace had a nice practice. Watkins is pretty impressive in size and speed and Wallace is nice and shifty. I look forward to watching more of them as camp rolls on. Hunter looked good but I did note Locker had to tell him how to line up once in drills. Still, he looks recovered and I intend to pay more attention to him over the weekend. 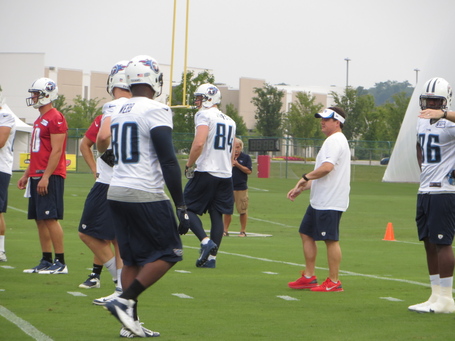 The Titans also have a nice set of TEs and Taylor Thompson may have made the play of the night. With Delanie Walker sidelined the younger guys are going to get some nice snaps and really overall they looked good. Brandon Barden looks more like a wide receiver to me however. I thought Webb and Doyle had nice practices and they both have nice size and decent speed. The numbers here may not look good but if they shine in preseason it's not hard to imagine they might garner some attention. 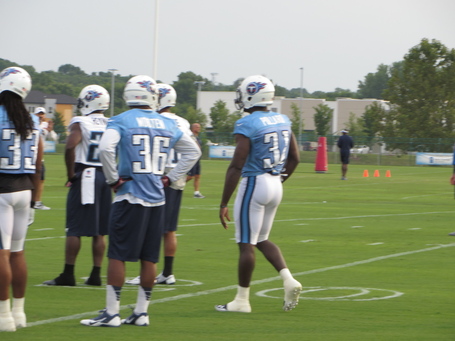 I'm not sure I can really overstate what Bernard Pollard is going to bring to this defense. That guys motor is always on full blast and it seems to have affected the entire defense. George Wilson is a bit bulkier in his upper body that I would have expected. The Titans had both of them on the field at the same time and he played strong safety. Michael Griffin to me looks like he has bulked up maybe about 5 pounds or so. Not more than 10 but he definitively looks a bit bigger and stronger to me.

I didn't get to see as much of Tracy Wilson and Al Afalava as I would have liked. I will try to pay more attention but I do think Wilson also looks a bit bigger and stronger from last season. I wonder if that is Pollard's influence on these guys. I saw Khalis Wooten make some nice plays and I intend to watch him more closely too. 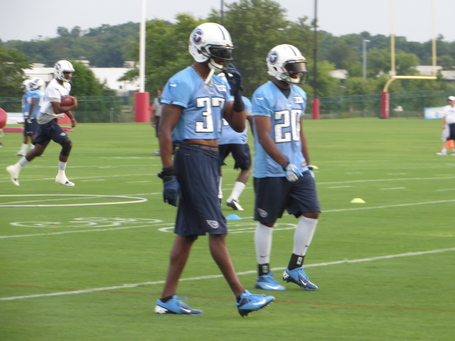 Verner does look lighter and more lean. Tommie Campbell still has those skinny chicken legs! Verner, Campbell, and BW3 alternated at the right cornerback spot. I also saw BW3 in the nickel spot. I am going to try and pay more attention to BW3 he certainly looks the part of the tall rangy CB that is currently all the rage in the NFL now. 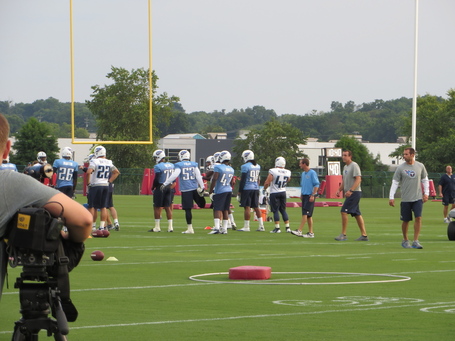 The Titans have a very nice looking linebacker corp this year as well. I know people will try and make a big deal about the linebacker rotation but it's not in my opinion. Colin McCarthy looks to be completely recovered and he looked good. He came very close to intercepting a Jake Locker pass. Tim Shaw did intercept a Ryan Fitzpatrick pass that was tipped I believe by Marc Mariani.

With so much action going on I didn't get to focus as much on the trenches as I like but I will say Ropati Pitoitua is leaner than I expected him to be. When they put the pads on Sunday I will get a better sense of how the lines look and I will definitely focus on the trenches that day. Derrick Morgan has slimmed down and it is noticeable.

That's it for my initial thoughts. Sometimes I will go back and update as I get a chance to look through my photographs and twitter feed. If I update this I will be sure to let you guys know!