At all levels of football, finding the safety is one of the best indicators of coverage for the quarterback position. 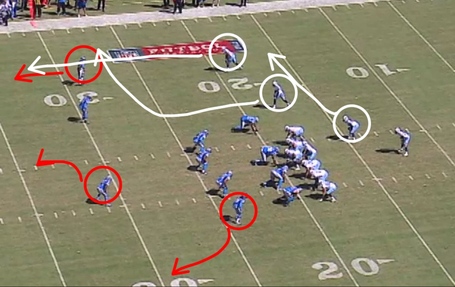 Back to back posts piling on Jake here. That's not by design. As you may or may have not read in the first post of this series, there's no rhyme or reason to the plays posted here. It's mostly just what happens to catch my eye.

If Jake Locker is to get better at the quarterback position, pre and post snap identification will need to improve. At the most basic levels of quarterback play, a fundamental identifier in reading defenses is finding the safety. Find the safety, and he's liable to tell you a whole lot about everything else with the defense. The placement of the safeties post snap always will give you a good idea (if not a totally clear picture) of the coverage shell you're facing. For this reason, QB's are taught to read the defense from the top down.

*There's some more sophisticated stuff you can do with pattern reading that's really beyond my pay grade. Pattern reading or not, it still amounts to a numbers game, and safety positioning matters.

In the play above, the first thing you'll notice is 8 guys in the box. This shouldn't come as a surprise since we're in an offset I formation with a Tight End. Put another way, we've got 9 guys in the box (5 OL, 1 TE, 2 RBs, and 1 QB), so 8 guys on the LOS is to be expected.

Watch the rotation of the safeties*. The strong safety positions as if he's in man over the slot receiver. Late in the snap count, the free safety rotates the single high position. Jake may or may not see this as the ball is snapped, but he's got to see it when he gets his head back around. That should be the first thing you're looking for. Once the FS is found in a single high position, you're looking for Cover 3 or Man Under. Either way, this play call makes the strong safety the key defender.

*Side note: When you watch a football game, you'll see the safeties try to roll at the last minute so they don't tip their hand. This is the classic time you see Peyton hard count to get the safeties to show movement, at which point he typically checks into an advantageous play.

You'll note that the play diagrammed above is a Sail Route combination (forgive me...the depth of Nate's route is incorrect). It's a Flood concept, and designed to be a Cover 3 beater. The Outside receiver runs a Go route. His goal is to carry the outside defender up the sideline, and more or less clear him out of the play. What this means is that, against typical Cover 3 where the SS is the flat defender, you've got two receivers at different levels that put him in a bind. If he sinks, throw the flat. If he bites on the flat receiver, throw the corner route.

Back to the play above. I think it's traditional Cover 3, but the bunch makes the patterning a little funky. Typically, the weakside corner (who looks like a 4th linebacker pre snap) will run the deep 1/3rd. You basically see this late in the play. The Will typically covers the curl/flat to the weak side. He doesn't do that here as there's no one to that side. The Mike and the Sam typically drop into Hook zones. You see that, but then the Sam free wheels to QJ in the flat. Whatever the case, the SS remains the key. His positioning will dictate whether Nate Washington - the player this play is drawn up for - will be open. And, as you can see post snap, he peels off his coverage from Nate and doesn't keep adequate depth to defend the route. The result is a 5 yard gain, but a 3 and out after an incompletion on the next play. Alternatively, this could have been a huge gain for Nate Washington who ends up wide open.

No doubt things like this are nitpicky, but attention to detail is what separates the elite from the average at the QB position. Jake should have made this play. The play was basic as was the coverage. It's a simple Hi Lo read, and pressure was not imminent. You can see that Nate is the primary read based on Jake's footwork, and Jake checks down to QJ. In my opinion, it's due to a lack of anticipation. He doesn't see Nate clearly open, even though the coverage is clearly going to get him open once the ball is out. It's a problem I saw in tape review this offseason. A lack of trust with what he was seeing in coverage, and an unwillingness to cut the ball loose unless he had seen the receiver was clearly wide open. With the hard work he's putting in this offseason in the film room, hopefully he can get more comfort in his game and improve in this aspect.