The Tennessee Titans may or may not keep Quinn Johnson in the fullback role this season, but they will keep a fullback. Let's look at the possibilities that Craig Stevens or Delanie Walker could bring the offense if they get the job.

Share All sharing options for: Tennessee Titans: Three Tight Ends On The Field

Today's NFL offense is about creating mismatches. This comes with versatility. As we've discussed before, a blocking tight end that also has a good size/speed ratio can create headaches for defenses because of their two way ability.

When entertaining the idea of Quinn Johnson not being on the field during 22 or 21 personnel groupings, my mind began to race over the formation possibilities. For the argument of this post, I will use Craig Stevens and Delanie Walker interchangeably in the fullback position.

The foundation of this is the power run game. 22 personnel with one wide receiver wide.

*please excuse the crude hand drawn formations. I am working on getting a program that will clean this up.

Let me begin by clarifying that I don't think the Titans should or will run out of this formation as a mainstay of the offense, but rather showing the possibilities if they decide to use this as a wrinkle during the game. Especially on the outside edge of the red zone. With their newly formulated offensive line, the run plays out of this formation, or at least personnel grouping, should be limitless.

After having shown this look multiple times in a game, or even running the same set or personnel for multiple plays in a row, the defense will start to cheat in, assuming you are being successful in the running out of this formation. Now the curve ball. 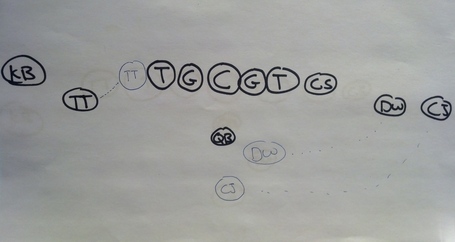 After the defense is convinced to be on their toes with their best run defenders, you spread them out. You can either run hurry up back to the line, or even change the formation pre-snap after the defense has made their calls. The difference in mismatches all come from the fullback spot. Had Quinn Johnson stayed in during this formation switch, the resulting alignments wouldn't be near as effective.

While Britt stays wide, Taylor Thompson could slide out off the line to play the slot much like we saw Jared Cook do last year. Craig Stevens stays in line to block and/or release into an underneath route or possibly even the seam depending on coverage. Delanie Walker and Chris Johnson split out wide to the right side.

With the defense in a run stopping personnel, you've now gone empty backfield with five receivers and yet left a runner in the back field with Jake Locker. The route combinations are endless but the simplest may be five verticals. If the defense stays in man coverage underneath, and everyone turns and runs, Locker can use his legs and has good blockers down field. That is of course assuming Taylor Thompson doesn't leave a mismatched linebacker in the dust.

Without delving too deeply in the X's and O's, there are countless variations and combinations that can be run out of this same theme. There are other similar formations that you could morph into with this same personnel grouping. One of the knocks on 22 personnel is that it clutters the box and may be difficult to run out of, especially with a runner like Chris Johnson. Since that's what sets the table here, the Titans are probably more likely to run this same design out of a 21 personnel grouping, where you would replace one of the in line tight ends with another wide receiver. If you could sell the run just as hard, the result would be magnified when you spread out having another receiver already on the field.

The bottom line is that this grouping can give Jake Locker a strong running attack as well as good receivers without subbing players and tipping your hand. The Titans hopefully have a couple of movable chess pieces in Delanie Walker as well as their other tight ends that make this type of movement feasible. If Craig Stevens and/or Delanie Walker can prove to be a competent lead blocker in the run game, then the sky's the limit for what Dowell Loggains can do with this offense.