Tennessee Titans: Behind The Lines Of The Jacksonville Jaguars

Let's take a look at what the Jacksonville Jaguars have been up to this off season.

Share All sharing options for: Tennessee Titans: Behind The Lines Of The Jacksonville Jaguars

This is the final installment of the Tennessee Titans: Behind The Lines series of post draft interviews for this off season. If you would like to read the earlier articles from Titan Sized, you can check the Houston Texans here and the Indianapolis Colts here.

Ryan O'Halloran is the beat writer for the Jacksonville Jaguars for the Florida Times-Union, and I was fortunate enough to have him answer my questions about the Jaguars and their draft. 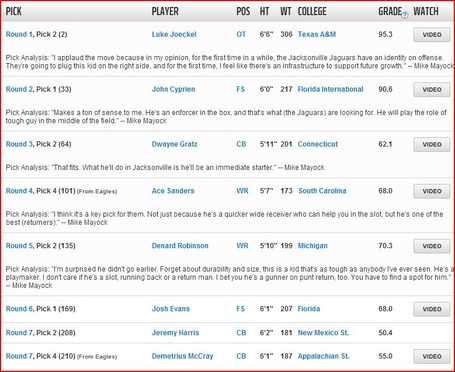 MCM - Who are Jags fans most excited about coming out of this draft? And outside of Luke Joeckel, who do you see starting day one for the team?

O'Halloran - The most interesting thing about the Jaguars' draft is how MANY of the picks fans are excited about. On defense, they can't wait to see safety Johnathan Cyprien (second round) make plays in the secondary and what cornerback Dwayne Gratz (third round) can do against the league's best receivers. And on offense, running back Denard Robinson (fifth round) is already one of the most popular players on the team, the same with receiver/punt returner Ace Sanders (fourth round). When the Jaguars face Kansas City in Week 1, Joeckel, Cyprien and Gratz are expected to be starters, safety Josh Evans (sixth round) could push veteran Dwight Lowery in camp and Robinson/Sanders will be part of the game plan.

MCM - The first round pick of Joeckel wasn't a shocker for anyone. How much better will he be at tackle, and how big of an issue was offensive line play for the Jags?

O'Halloran - Joeckel was a left tackle at Texas A&M but has worked only at right tackle during the off-season practices, confirming our initial thought that Eugene Monroe would stick at left tackle. Joeckel projects as a big upgrade at the position because he has shown the ability to pass protect without tight end and running back help, something that was a big problem for the Jaguars last year. Outside of the tackles, though, the Jaguars have big questions at guard and center. Left guard Will Rackley missed all of last year with a foot injury, right guard Uche Nwaneri had off-season knee surgery and center Brad Meester is 36 years old. One of the storylines in training camp will be who emerges as depth players.

MCM - Denard Robinson seems like a steal where he was taken in the draft. Do the Jaguars have a plan for him yet? Will he just be sprinkled in here and there as a "playmaker", or will he have a defined position?

O'Halloran - Time will determine if Robinson was a steal in the fifth round or a reach and the Jaguars were trying to fit a square peg into a round hole. The Jaguars wasted little time publicly defining his role, saying an ideal scenario is to get him 10-12 touches per game. I would be surprised if it panned out that way. My guess is he will be worked into the offense slowly early in the year - some at running back, some at receiver, some at quarterback. It might not be until next year he has a defined role.

MCM - 5 of the Jaguars 8 draft picks were in the secondary. This obviously seems to be an area of focus for the team. Do you think that was the biggest need the team faced?

O'Halloran - Once the Jaguars established a quarterback wasn't worth drafting in the first round - or any round, the secondary needed to be rebuilt considering what they did in free agency, choosing to add defensive line depth. All five players are expected to make the team and it was a priority because coach Gus Bradley's defensive philosophy calls for big, physical corners who can play press coverage; that's not what the team had on its roster the last few years.

MCM - They added a couple of players, or at least depth, around Gabbert with Sanders and Robinson, but that's about it. Does he have what he needs around him to succeed? Can his struggles be blamed on his supporting cast?

O'Halloran - Blaine Gabbert certainly has more parts around him - and in front of him to be more effective this year. But who knows for sure. The Jaguars are better at receiver because Cecil Shorts has looked great in the off-season workouts, Justin Blackmon is expected to be improved (after he serves a four-game suspension), tight end Marcedes Lewis loves his role in the new playbook and the aforementioned Sanders and Robinson add a dimension the Jaguars didn't have last year.

MCM - The Titans had a loud and aggressive off-season making a lot of moves in free agency as well as finally making the fans happy with their drafting. How do you feel the Jags will stack up against the Titans this coming season with both off seasons in the books?

O'Halloran - The teams had different plans in terms of their free agent spending, as they should have considering how the Jaguars cleaned house of their general manager and coach. Tennessee, with Levitre and Warmack in the fold, has a better offensive line than the Jaguars, but I would put up the Monroe-Joeckel tackle combination against a lot of other teams. On the defensive front, the Titans' Sammie Hill is a people-mover up front and the Jaguars hope the same is true of Roy Miller although he has been held out with knee tendonitis. But let's face it - everything in both cities is dependent on the quarterbacks. It's the third year for Jake Locker and Gabbert and if they show a big jump in production, so will the entire team.

It seems that the Jaguars fans are just as excited as the Titans about their off-season. It also seems like they have a large amount of rookies that will start or at least get substantial playing time. With Joeckel, Cyprien, and Gratz all projecting as starters week one, Sanders and Robinson contributing at the least, and Gray potentially pushing for a starting gig, the Jaguars will have a lot of rookies on the field. In contrast, the Titans only have Chance Warmack as a locked up week one starter. Justin Hunter and Blidi Wreh-Wilson will have to break into deep lineups at their positions as will the other rookies.

Another note of interest is that the Jaguars cornerbacks are being asked to play the same type of front the Titans are implementing. More of a physical man coverage secondary. With the Jaguars new defensive line, they are obviously hoping to not leave the rookie corners man to man for long.

Ryan's last response is obviously spot on about how the teams will only go as far as their young quarterbacks take them. I do get the feeling though that the Titans have done more to put the right people around Locker than the Jaguars have for Gabbert. Justin Blackmon's suspension hurt them in this category and the interior line seems like it could be a weakness as well.

You can follow Ryan O'Halloran on Twitter as well as check out his columns here at The Florida Times-Union.