If Locker's going to take the next step in his game, his ability to move within the pocket will be a key point he'll have to improve on. 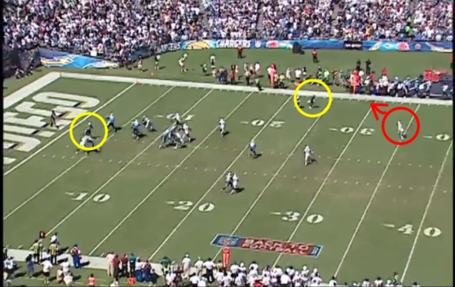 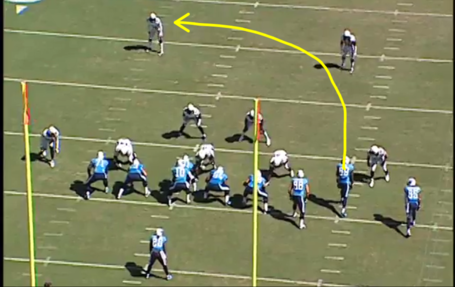 Plays like this concern me about Locker. It's not that it's unfixable, but it's also just unecessarily complicating what should be a fairly routine play. The Titans run play action out of 12 personnel (for a refresher, this describes the players on the field. First number is the number of RBs. Second number is the number of TEs.).

Like most play action passes, he's got a 7 step drop, with a hitch step at the top. In general, the idea behind a hitch is to gather your balance, which is why it's also often referred to as a gathering step. If pressure in the pocket dictates it, a QB will sometimes carry the momentum forward into the pocket to buy time.

What you see above is a real problem. The play is executed well - from the blocking, to the action you get from the linebackers, and the fact that Cook (and maybe Wright) get open on the play. The problem is one you saw often from Locker when he struggled (or even sometimes where he succeeded). He wants to see the play open before he cuts the ball loose. He doesn't alway trust his reads, and sometimes want to sight verify that the receiver is actually open. And, that's what happens here.

When Locker gets to the top of the drop, Cook is open, and he'll stay open through the first hitch, though as Locker continues to hitch, that window begins to close. The very top still shows when Locker reaches the top of his drop. I initially thought the play was a throw to Wright, which is why those players are highlighted. But, it may have also been an overthrow to Cook. Either way, the read should have taken him to Cook as you can see from the open area around him in the still. Perhaps more frustrating is that Locker appeared to see this from the beginning, yet continued to hitch in order to get comfortable with the read, eventually "hitching himself" into trouble.

From a quarterback, you want efficiency in all aspects. This applies all the way down to footwork as well. There is no sense in taking extra footsteps unless it's absolutely necessary. Balance is so critical for the QB position, and unnecessary movement puts this at risk. And, as you can see above, the extra steps actually led to a forced, off balance throw.

For me, the biggest issue I saw in Locker's game was extending plays in the pocket, moving well in the pocket, and progressing through reads while he did these things. These things are not insurmountable, but they will need to be improved if Locker is to take the next step at the NFL level.