Zach Brown showed flashes of combining his incredible athleticism with good football savvy, which could lead to him becoming a bright spot on this defense.

Share All sharing options for: Titans GIF Dump: Sifting Through The Wash 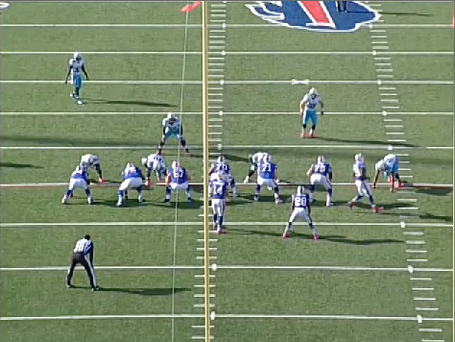 There may not be a player on this team with more upside than Zach Brown. The workout warrior translated into tangible results on the field last year (something that isn't always true - ahem - Chris Henry). It's so easy to get hung up in height/weight/speed. And, really, so many of these coaches have the incredible egos to think they'll fix glaring problems at the next level, while maximizing these physical skill sets. That's not always the case. Yet, in the case of our young linebacker, he's managed to prove that in addition to being a physical freak that he's also a football player.

Titans line up in a Nickel look here. I can't speak for the entire playcall, but Zach Brown is clearly in man coverage here on the running back. Not only that, he's manned up against arguably the most explosive back in football - CJ Spiller.

The Bills try to execute a screen here. Note how the center and weakside guard leak out to the playside as the play develops.

The exciting thing to see on this play is how Brown reads and reacts. And, again, be mindful of the player he's covering. When you talk about a guy that can make people miss in a phone booth, CJ Spiller is example A. The play is appears easy in real time, but not all linebackers will read and react to a player like that with the same sort of conviction (further, not many can close that quickly either). Also, note that Brown is defending a two way go. That is, CJ Spiller can just as easily go right as he can go left, and Brown is responsible for both here. Brown makes the read, identifies the screen, and sifts through the wash (ie. navigates the blockers) for a TFL.

As the season progressed last year, Brown got better and better. Then, this offseason, you find out that the guy played the entire year with a shoulder injury, which resulted in surgery. The fact that he dealt with this, and didn't make excuses even once to the media makes you love the guy that much more. The idea that the Brown we saw last year was not only a rookie, but also playing at less than 100% is scary. I expect Brown to take a huge step next year, and become one of the better players on this team.