Today we look at a great play by two of our young linebackers.

This will begin a new series for me. It may or may not replace the traditional in depth analysis. I intend to do many of those as well, but they may end up finding themselves in these posts. I'll try to get these up as often as possible. The plays highlighted will almost always be Titans-centric, but I'd imagine other teams will pop up as well (the Redskins in particular have me interested). There's not likely to be cohesion between posts. It's just what randomly catches my interest in film review for that day. If you have specific requests, please include them in the comments. 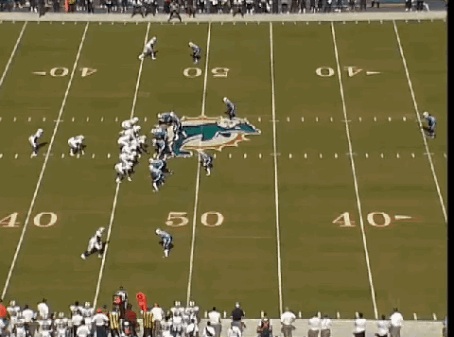 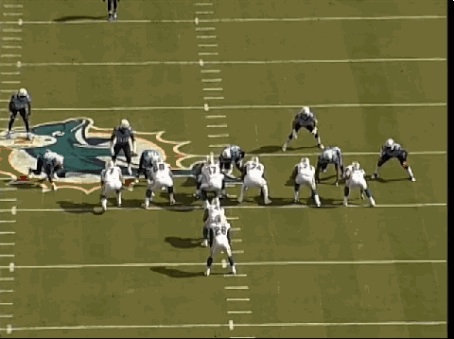 Two GIFs to kick off the analysis. This is really more out of necessity to review this play.

Titans line up in a 4-3 Under front out of base 4-3 personnel. If you're looking for identifiable "under" features, keep an eye out for two things:

1. Positioning of linemen. Look at the weak side of the line in the lower image (weak meaning, opposite of tight end). The DE is outside the tackle, and the DT is in a 3 technique outside the guard's shoulder. Note that the strongside tackle and end have slid over as well. If we weren't blitzing, this would mean both players are working against single coverage.

2. Positioning of linebackers. Ayers, our SLB, is lined up right outside of Morgan. This is typical of the 4-3 Under. In a traditional 4-3 look, all three linebackers are off the LOS. Note that Brown's positioning isn't typical. He'd normally be off the LOS, but he's blitzing here.

That's really painting with broad strokes there. An entire book could be (and has been) written on the subject of the 4-3 Under. But, if you're looking to identify the formation, then these things are a good place to start.

So, Brown blitzes and we get five man pressure. That leaves 6 men for coverage - LCB, RCB, FS, MLB, SLB. When you look at the coverage shell pre-snap, it looks like potentially cover 1 or cover 3. This is due to the single high safety look. Post snap, to me, looks like man under cover 1 due to the fact that the corners are in bump and run coverage and they each break on the curl route. Further, based on their reactions, I'd guess that McCarthy and Ayers are both in man (on the RB and TE, respectively), but free lance a little when those players stay in to protect.

All this is an unnecessarily long narrative to describe what I love about the play. Both of our linebackers show great instinctual play and awareness here. Ayers sees the TE is in protection, so he reads the QBs eyes and looks to bat down the ball. McCarthy does the same thing. Reads the play, then the QBs eyes, and breaks on the football. The result of both of their play is 6 points.