Share All sharing options for: Bowling With Coach Munchak

GG back again...with another article about an awesome fan experience that I got to participate in and now get to tell you all about!

Thursday night, Big Tuna, my brother in law Kyle and my friend JB were all privileged enough to attend the 2nd annual Mike Munchak's Strikes to Stop Diabetes at the Hillwood Strike & Spare in West Nashville. Tuna and I attended the 1st annual event, but I was too lazy to do a post about our experiences. He made me promise to write about it this year, so I decided I will appease the boss and share some stories...and pictures!

Coach Munchak's charity of choice is the American Diabetes Association. His reasoning is simple...but powerful. Both Coach's Mom and Coach's Wife are fighting diabetes, so this is something that literally hits home and is obviously a cause that holds a special place in Coach's heart.

The format is simple and exciting. A team of four bowlers gets to bowl three games, each with a different Titan player. The bowling alley is closed to the public, and we are free during the games to mingle with players and coaches and talk some football. There is a huge silent auction going on during the evening for autographed game used jerseys, pictures, footballs and all kinds of great stuff. After each game, there are also live auctions for such goodies as a Mike Munchak autographed game used jersey. We also have a buffet to enjoy as well as a few adult beverages. Much fun to be had! And even though I know I am starting to sound like a broken record with these things, but once again we were surrounded by guys who are just good people who happen to be really good football players. So..let's get on to the visual proof!

For game 1, our guest was Brett Kern: 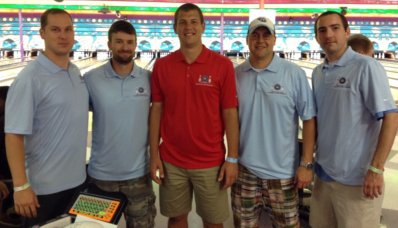 Brett tried to teach us how to kick a knuckleball and shared some stories about how he learned from the master Craig Hentrich. He also told us that the attitude around BSP is completely different this offseason than last. For the better... 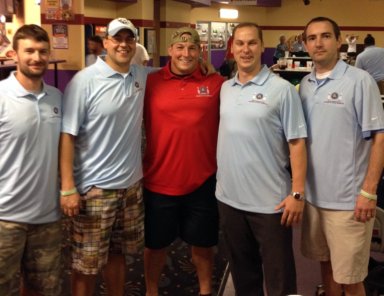 If you are not familiar with Collin's story and background, check out this interview he did with the Midday 180 in Nashville. Collin is a guy I have followed just because of his military background and we had some good natured back and forth Army vs Marine Corps stuff. We talked football too of course...Collin told us that the running game this year would be the same it has been, but the passing game will be completely different.

I also asked Collin who the hardest guy on our defense to block is and he said.....nobody. Ha! He actually did come back and give us a name...I will post a poll at the end and see if y'all can guess who he told me. He said we have a whole bunch of great football players on our defense and it was hard for him to just name one.

It turned out that this was our lucky night, because waiting for us for Game 3 was none other than the man, the myth, the legend.... 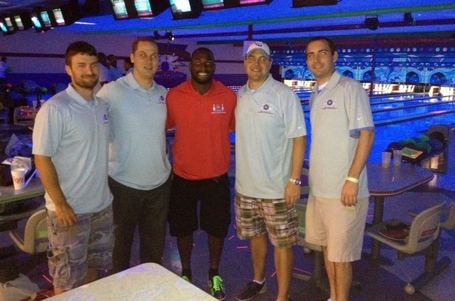 There is nothing I can say that can do justice to how much of a genuinely nice guy Alterraun Verner is. It made our night that we got to bowl with him...cosmic bowling no less! The cool thing about ATV is that he really seems interested in talking to you...and not only about football! He did tell us that we wouldn't recognize the defense this year and that has me super excited. He also corrected two misconceptions that have been floating around MCM for a while: He is a corner and will not be playing safety, and they won't know who is playing the nickel, etc until training camp/preseason. OTAs are just about getting guys reps.

Of course, the big part of the evening was increasing our collection of Titan autographs and memorabilia, and we did take a lot of pictures among the four of us. Our evening started with 3HL broadcasting from right behind our lane, and I was able to hang with Blaine Bishop for a few minutes: 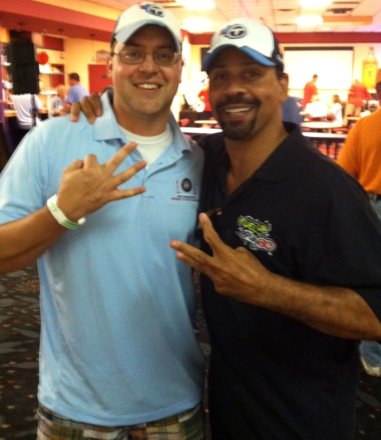 He signed my old school 23....said he doesn't see very many of these anymore: 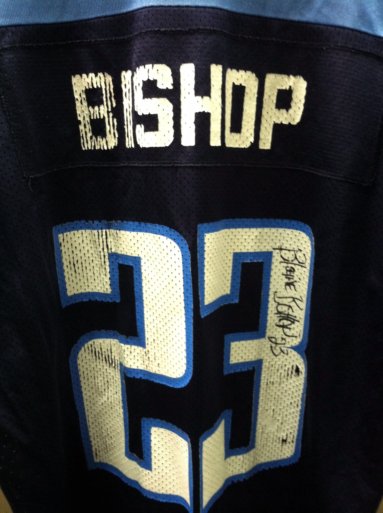 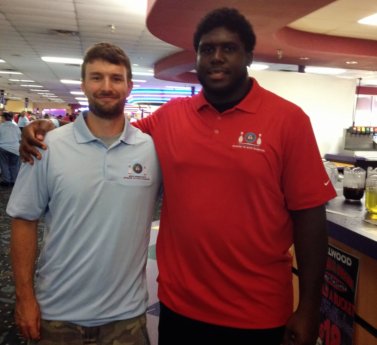 JB got to kick it with Justin Hunter: 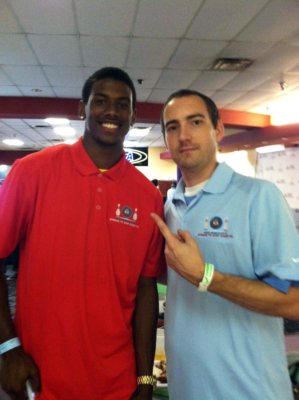 Big Tuna and GoldenGrams with the man who will lead us to SUPERBOWLZZZZZZZ: 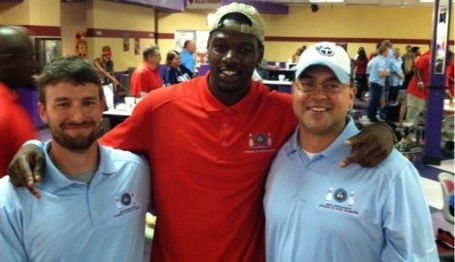 Later in the evening, JB went back to fill up his plate and noticed the following scene playing out in the bar area: 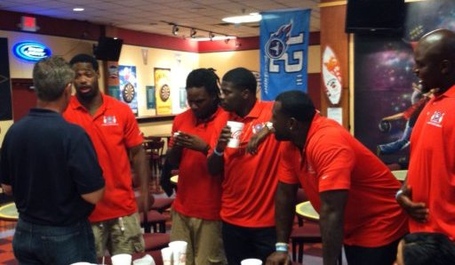 That is Gregg Williams talking with Kenny Britt while Chris Johnson, Kendall Wright, Delanie Walker and Fernando Velasco look on. It was a "heated" discussion about how Kenny Britt was going to dominate the defense at training camp....Coach Williams said that he has a Super Bowl ring that says it won't happen. It really was awesome seeing these guys interact like this. 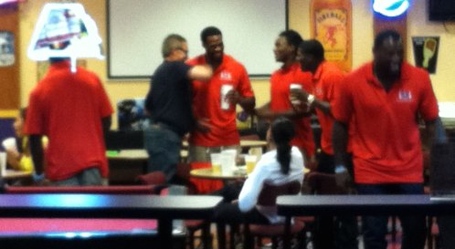 We got to speak with Coach Williams a few minutes later. I told him we were glad he was back and he said it really does feel like he is home. He also told me we were gonna win a Super Bowl in Nashville*. I was ready to strap on the pads.

*He didn't specify a year, BUT I AM SURE HE WAS TALKING ABOUT THIS YEAR!!!!!!

Well, enough with the player pictures...lets check out the loot: 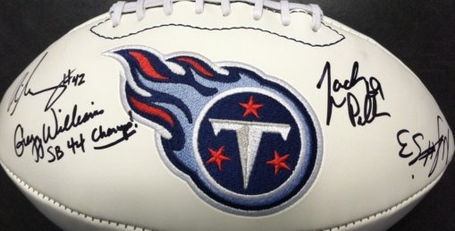 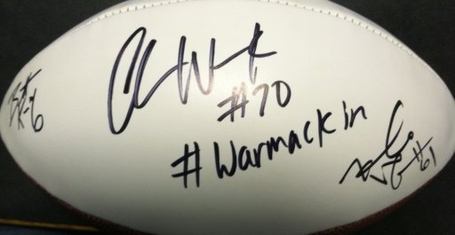 Brett Kern, #WARMACKIN, Fernando Velasco (And for the record, I asked Chance to put his hashtag on there...he doesn't just sign stuff like that!) 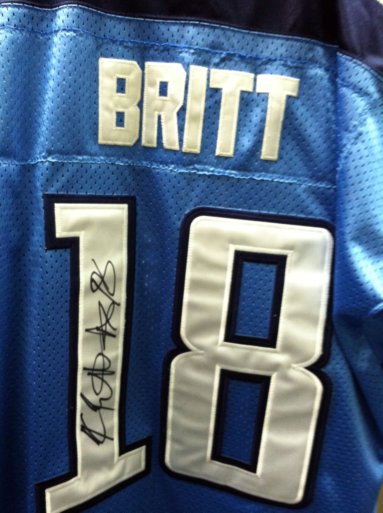 That's not a great picture, but this is my favorite autographed item I think. It will look great in a frame. 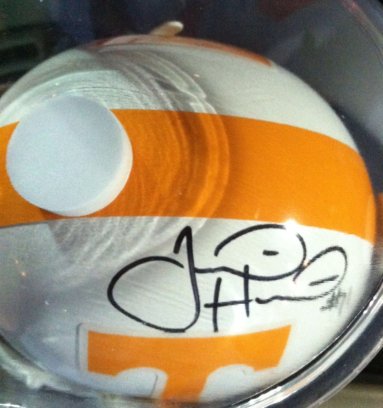 That reminded me of a conversation I had with Justin. I asked him if he was planning on changing his number at all and he started giving me some wishy-washy answer...."maybe in 3 or 4 years I might change..blah blah blah." I kind of stopped him and said that I was getting a Justin Hunter jersey so I really needed to know if he was gonna change.

He said "You're getting a Justin Hunter jersey?"

It was really funny. And if he really doesn't ever change numbers, then you can thank me! 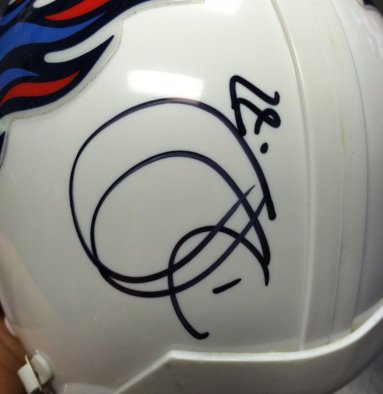 All but three of the draftees were in attendance. I got their autographs on some rookie cards: 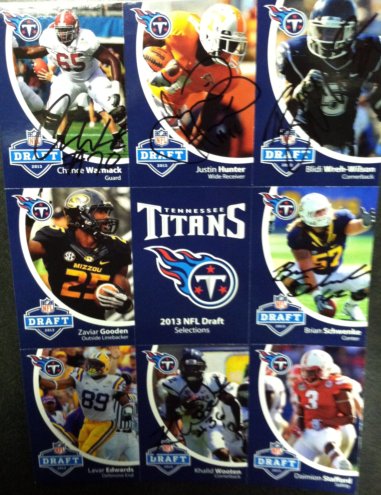 That is all of the pictures we have. I am a little upset with myself....I went in with an autograph strategy that made perfect sense at the time. Just trying to get the autographs of guys I didn't have already. I am regretting that now, once I got the ones I needed, I should have just gotten my football filled up. Boo me. There were tons of other players in the house: Jake Locker, Colin McCarthy, Chris Johnson, Kendall Wright, Damian Williams, Marc Mariani, Kam Wimbley, Derrick Morgan, Jurell Casey, former players Kevin Dyson and Derrick Mason. Coaches Munchak and Matthews and Gray and Loggains. And more and more and more. Oh well. I can get it filled up at training camp hopefully.

As always, a perfect evening. As they say...A great time was had by all. And lots of money was raised for the fight against diabetes, which is what the evening was all about!

Vote in the poll! I will keep it open for a few days and then reveal the answer in the comments!