This staff and front office appears to have a goal of versatility on defense in 2013.

Our scouts have done a terrific job of getting us guys who can go out there and win one on ones. That's kind of what you're looking for. A lot of teams are spreading you out, doing those type of things, and when you can win one on one it will give you a chance to make more options. So, you got guys like Fokou. You got guys like Pollard. They mix in with Wilson and Griff and all those guys. Now you've got three or four guys that can blitz from the back end. You've got big guys that can blitz inside with Ayers and with Zach Brown and those guys. Now it lets you use that talent, other than always schematic.

Those big guys have a role in this league. You've got to be able to be physical up front. You've got to have a presence to stop the run. We went out and got some really big guys. And, after that, now your little guys get a chance to play. If the big guys can't stop the run, the little guys have to stop it and you're going to be in trouble trying to do that. And, I thought we did a terrific job of bringing in some more big guys.

It gives you a whole lot more options. Offenses don't like that because now they've got to identify who that 4th guy is. Are you rushing him? Are you putting him in coverage? What are you doing with him? A lot of offensive linemen, they like four down line men. I can count them and find the Mike. When you've got three down linemen, it's always harder. Because, is it going to be a linebacker as the fourth rusher? Is it going to be a safety as the fourth rusher? And, we actually had a really good defense in Buffalo doing that. And, hopefully that's what we're working on getting now. I was a part of that in Seattle. We did the same thing. Matter of fact, we played with eight DB's in Seattle and it really screwed you up because you don't know who those other two guys are. And, offensive linemen, I'm telling you, they don't like that.

Yeah, you know, I was with WIlson when he transfered from a wide receiver over to a defensive back. And, you know, played a little Will linebacker there in Buffalo.

George Wilson from May 21st:

I mean, I didn't know other plans they had as far as the secondary went, but I welcome it. Bernard is a force to be reckoned with. He's a big hitter. But, one thing about it, you know, when they told me there's a lot of packages that we're going to have in place so that maybe there are opportunities for all of us to be out there at the same time. So, you've got to just wait and see how all the pieces continue to fit together.

Multiple. That's the message I've gotten from this front office on both sides of the ball this offseason, but especially defensively. They've acquired big guys up front that will allow them to one gap and two gap situationally without substituting. At the LB spot, Gooden was added as a speed linebacker with a safety background. Conversely, Wilson was added as a Safety with a linebacker background. Let's start with a couple of pictures as that should help ground us a little better for the discussion. 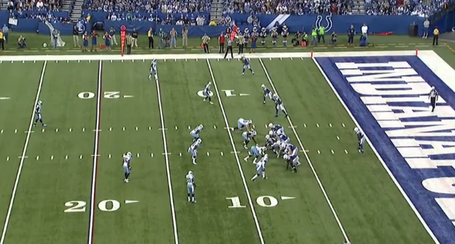 Here's a 3-3-5 look from last year. What you'll notice is that, in function, it operates as a 4-2-5. Ayers is standing up on the end and functions like a traditional end (they also put him down in a 3 point stance a few times last year). The important thing to note here is that this is not an additional blitzer. He's working on traditional 4 man pressure, which is different from when he blitzed from the Sam spot outside. Again, this lends to versatility.

Matt Bowen had a good piece on Gregg's blitzing scheme in 2010. 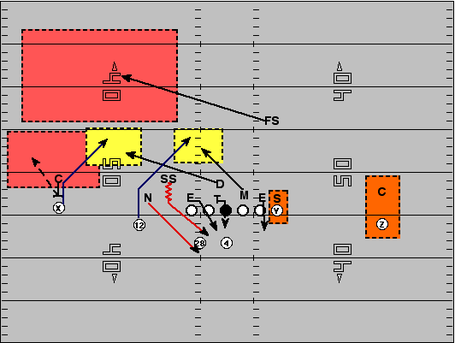 Let’s break it down by position to make it clearer and then get into some key coaching points.

RDE- Slant hard to open side “B” gap - Klug/Pitoitua

MLB- Vertical hook No. 2 to open side - Gooden/Brown

D- Vertical hook No. 1 to open side - Pollard/Wilson

N- Outside blitz contain to open side - Ayers/Wimbley instead of the Nickel Corner (though likely in more of a traditional EMLOS, whether standing or in 3 point slance)

SS- Inside blitz contain to open side - Pollard/Wilson - In this scenario, they'd blitz outside with the end blitzing inside.

FS- Play deep half to open side (2-Man principles) - Griffin

So, this package was called the "Ruby" package, or 3-2-6, which Daniel wrote about last year. I'd guess this package will be in the mix, but I anticipate more 3-3-5, especially in passing situations. In that regard, I made some tweaks to illustrate what that would look like. Note that if they wanted to stick with the Ruby package, you'd remove Ayers/Wimbley and plug in BWW at the Nickel spot in the above play. In more "traditional" Ruby packages (ie when you're not dialing up this type of overload blitz), I'd probably keep the defensive linemen listed above and then Brown/Ayers as the two linebackers. This would allow you to run it as a 3-2-6, or spin into a 4-1-6 without the need to substitute.

It's no secret that Gregg Williams is a proponent of zone blitzes. The effectiveness of those blitzes in New Orleans remains up for debate. Without really digging into the personnel in those years, I don't have much of an opinion. What I do know is that there's no magic bullet when it comes to scheme. Sure, some are better than others, but at the end of the day the players have to play. That's what you're hearing from Gray with that first comment. We've got the big guys up front. We've got the versatile linebackers and defensive backs. Now, we can do things (like the play above) that are simple for the players, allowing them to use their talent, rather than reaching into a bag of tricks for an advantage (read: dropping defensive linemen into space).

The point there is really that you've got 3 big linemen that can eat up space. In most cases, they aren't dropping into coverage. From there, there are two safeties (Pollard/Wilson) that can function as linebackers. Two linebackers capable of running with TE's/RB's and blitzing (Gooden/Brown). And, you've got a third linebacker that can play end or Sam linebacker. So, what happens is you've got all these versatile looks, which ends up amounting to a nebulous look pre-snap. Linemen and the QB struggle with keys even if you're bringing traditional four or five man pressure. As is the case with most great schemes, you're trying to achieve two things:

1. Create confusion and/or problems for the opponent

2. Keep things simple for your own players

If you can do both of these things at the same time, you've created an environment for potential success. From there it's on the players to execute and translate schematic theory into tangible results. Whether the Titans can do that in 2013 remains to be seen, but it's clear to me that they have a direction and vision of what they are trying to achieve.