Beginning with the 2013 offseason, the Titans have begun taking several initiatives to be more "fan-friendly" and to give more to the season ticket holders than just a ticket for football games. There have been several offers coming across the email for season ticket holders including family-friendly movies at LP Field (bring a blanket and watch Hotel Transylvania on the jumbotron!), post-draft Q&A sessions with Ruston "IDGAF" Webster and Coach Munchak and the offer I took them up on, a behind the scenes tour of LP Field. (There was also the time Colin McCarthy called me while I was in Disney World to thank me for being a season ticket holder and I didn't answer my damn phone. Schmuck.)

So since I had a blast on my tour, I figured I would share the experience with all of you. I remembered to write about my behind the scenes trip to BSP and completely ignored the chance to write about the evening Tuna and I spent at Mike Munchak's Strikes to Stop Diabetes. I need to do better about chronicling my adventures on here! I did forget my camera this time (SCHMUCK), but I did have my phone so I got a few pictures for your perusal.

We started our tour meeting with our group just inside the West Club Entrance. We were greeted by some Titans personnel as well as a few cheerleaders. We mingled there until it was time to load up onto the elevators and head downstairs. Once downstairs, we were ushered into the postgame media room. This is the room where all the postgame interviews take place with the LP/Titans banner hanging on the wall. It was here that Don MacLachlan met with us and talked to us for several minutes about what we would be doing as well as the state of the team. Remember.....just because people are season ticket holders doesn't mean they are as educated as MCMers. But you all know this already. So a lot of it was stuff that I already knew thanks to MCM, but he did say one thing that was satisfying....He was the first person who is actually affiliated with the Titans who I heard say that the Ratbirds "twisted Chris Johnson's ankle under the pile" in the playoff game. We aren't just making stuff up around here! Before we moved on, we had the opportunity to take some pictures at the podium with the banner behind us, but I was too excited about our next stop.

From the media room, we walked right across the hall into the Titans locker room. First impression was that it is much smaller than I thought. They had four lockers with game jerseys and helmets that we could try on. Johnson, Locker, McCourty and McCarthy. I headed straight for #30: 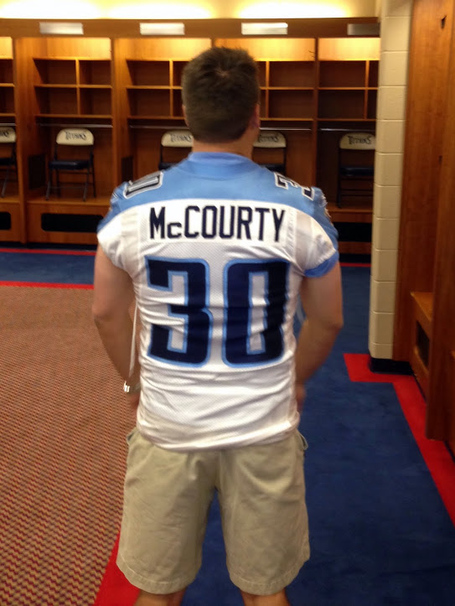 These jerseys are crazy tight. We asked the locker room attendant how they got these things on and off with shoulder pads underneath...his just replied "with a lot of help"

The only other jersey I got to try on was the defensive C: 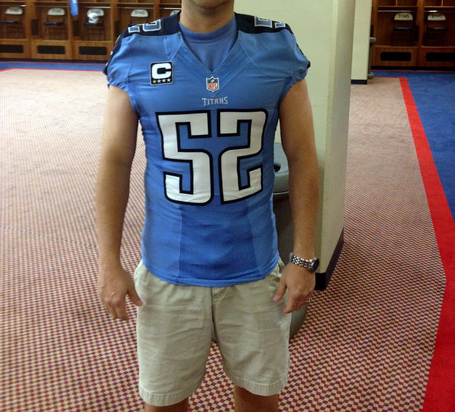 It was even tighter than McCourty's. And my belt buckle makes it look like I am really excited to have that jersey on.

It's my belt buckle. I promise.

By this time, our group had already started heading out to the field. SteveO and the Robster (Tuna was supposed to go with me but he bailed on me for some ridiculous reason*. Probably a Cubs game on tv.) and I were the last three to head out of the locker room down the tunnel toward the field. Once we walked out into the tunnel we passed the training room on the left and Coach Munchak's office on the right 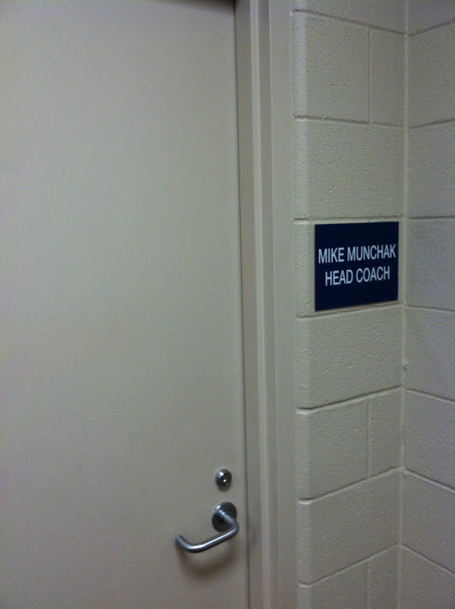 I have no idea why I took that picture, but now you get to look at it. 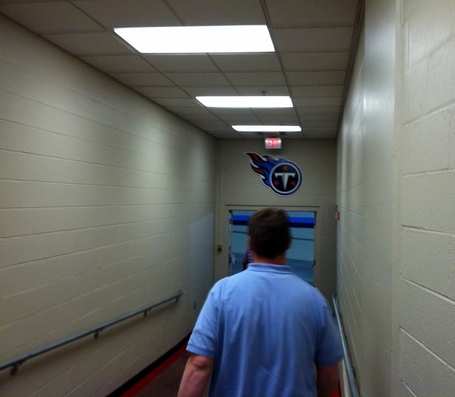 That is the Robster leading us to the field! Once we get through that door we are taking a right to daylight 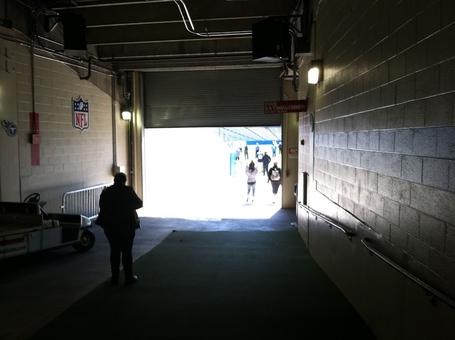 And out a little farther into the daylight 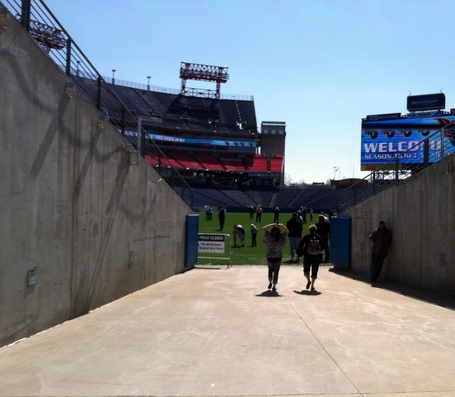 The only thing that would have made it better would be if they had the blow up helmet for us to run through!

You'll notice in that picture that both the jumbotrons and ribbon boards around the stadium were ready for us with "Welcome Season Ticket Members" everywhere. And I'll tell you this, that grass is BEAUTIFUL. 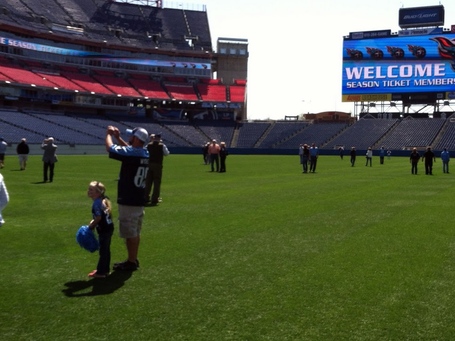 Another shot of the video board from the field. The black lines were not actually only on the board. SteveO told me they would only be on the picture because of some crap about refresh rate or something. 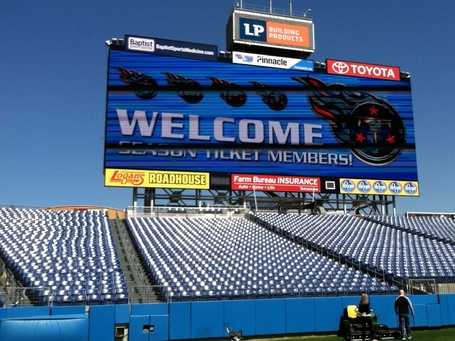 I could see my seats from the field! 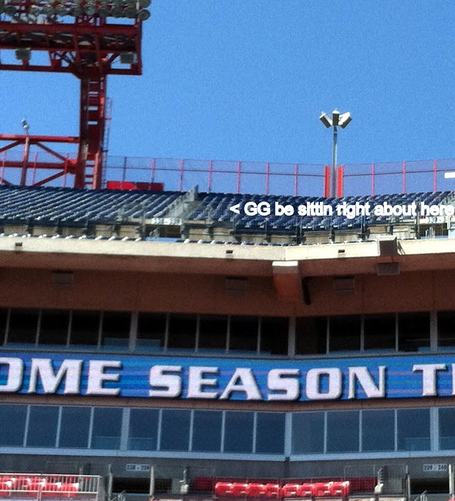 Another stadium shot from the field 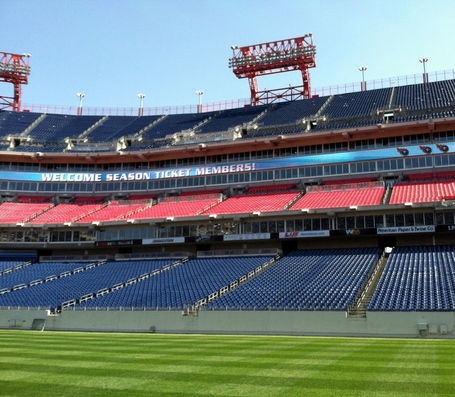 We told our tour guide they need to drag out a bag of footballs so we could actually score a touchdown! He said that is a great idea. Maybe they will do it next year. Boo.

They also had a short video of Mike Keith talking with IDGAF Webster about free agency and the upcoming draft up on the screen and then had some of the cameras focus on us so we could be on the jumbotron. Pretty cool.

From there, we went back to the elevators and headed up to the suite level. We got to walk around on the field level of the inside of the stadium for a few minutes and it really is fascinating how huge it is under there. They have a huge area where all the TV trucks actually park under the stadium. Massive.

They took us into the Titans Radio Suite (not the booth, the suite where the corporate sponsors get to party). They wanted us to see what a suite looked like and what it was like to see the field from there AND OMG MIKE KEITH 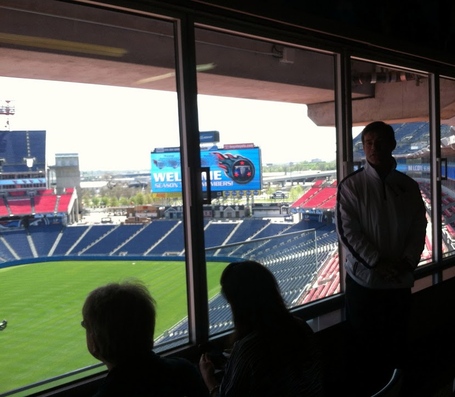 None of you would be able to keep from getting excited just listening to this guy talk about the Titans. Nothing but positivity and excitement. He talked about what it was like in the radio booth on game days, how much preparation went into his gamedays and even took questions. He talked about the excitement of the Music City Miracle and how incredible it was to be able to just stop talking and watch the crowd in the aftermath. He is easily one of the best things this organization has going for it. I could listen to him talk about the Titans for days. But alas, the tour was ready to move on. Next stop, the press box.

I didn't take a picture inside the press box because, well, it was kind of boring inside. We did get to meet with a member of the Titans' PR staff who told us about how the press box worked and what one of their typical gamedays is like.

We also learned some interesting trivia...although the Titans press box is a "working press box," meaning there is to be no cheering for the team or outbursts from people inside the box, most of the Titans executives, including IDGAF Webster, watch the game right there on the second row of the press box. That way they can be close to the stats and information flowing from the field into the press box. The fact that they are not in a suite somewhere surprised me.

From there, we got to see the booth where the TV sets up, the Titan Radio booth (which Mike Keith told us earlier has maybe the best view of the field in the league): 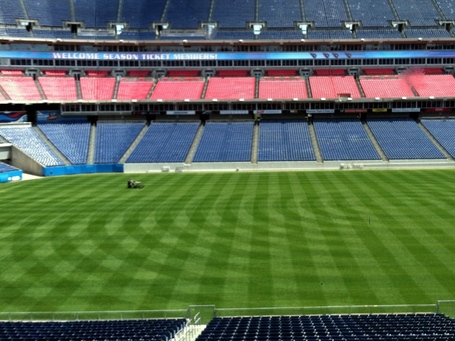 We continued down the hall past the coaches' booths and replay officials' booth (which is locked up like Fort Knox) into the stadium control room. I didn't take any pictures in there, but it looked like Mission Control. Screens and boards with knobs and buttons and shit EVERYWHERE. I can't imagine the millions of dollars that that stuff costs. This is the room where they design all the in-game entertainment and create and choose which replays to show during the game (only the ones that would benefit the Titans according to the man in charge!).

This was the end of the tour, but not the end of the day. From here, we went back up to the Club Level and were given a box lunch from Jason's Deli to enjoy.

All in all a really great time. I really do appreciate that the Titans chose to open the stadium up to us to see things and places that we would never be able to see any other time. I can't wait to see what the organization has in store for us this summer and next season!

*Obviously not true. Tuna bailed to go to a commitment with Little Tuna. He has his priorities straight!