This will begin a series of one or two posts that seek to understand our young, enigmatic WR - Kenny Britt.

For the purpose of this series, I'm seeking to understand Kenny Britt's struggles this season. Despite his injury, I think many believed that Kenny would be somewhat productive, with some (myself included) being hopeful that he might return to 2011 form by year end. In order to reconcile the what, I really needed to understand the why. Thus, this post materialized more out of curiosity than anything else.

Without really delving into the 2012 tape, I wanted a fresh look at 2011 (even with it's small sample size) to understand the dominance. This post will try to articulate Kenny's dominance in 2011 by breaking down a handful of plays. By understanding the tools and environment Kenny operated in during the 2011 season, hopefully we can better understand Kenny's struggles during the 2012 season.

The title says it all: Flash. Kenny Britt's season was just that. After 2 weeks in 2011, Kenny was arguably the most dominant receiver in football, at least statistically.

Video game numbers. Given the small sample size, the Jacksonville 80 yard TD (a fluke play), skews the numbers a bit. Yet, it was the other things he did in these games, and his versatility that really provided the backbone for this dominance. Kenny's physicality is undeniable, and he gets away with some sloppy routes because of it at times. He also has a tendency to sometimes let the ball get into his body too much. Still, especially in the red zone, Kenny can display better route running and ball control than he probably gets credit for. We'll look at a handful of plays that highlight these points in 2011. 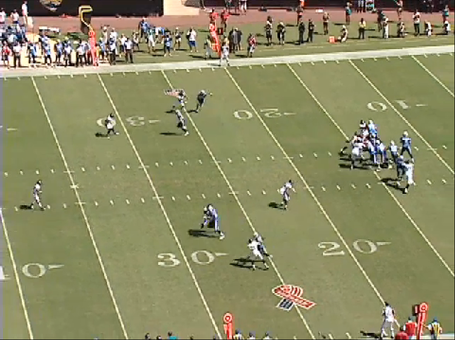 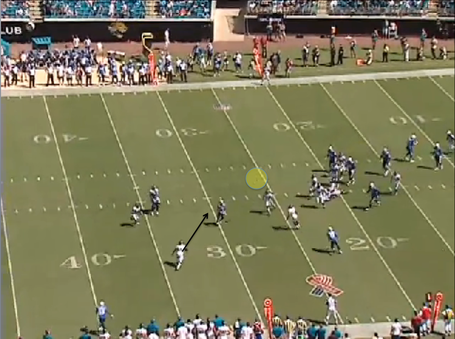 Hasselbeck evades pressure and lobs the ball up to Kenny almost like a long shuffle pass. The Jacksonville defender takes a horrible angle, effectively taking himself and the backside defender out of the play all at once. 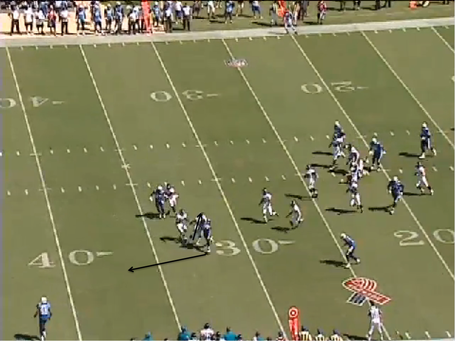 The defender flies by Kenny, and picks the backside defender in one motion. Kenny scampers to an 80 yard TD. Not much to analyze here. Pretty unusual play, that's success is more a result of bad defense than good WR play. I only highlight this play because it represents 25% of Britt's yardage on the year. 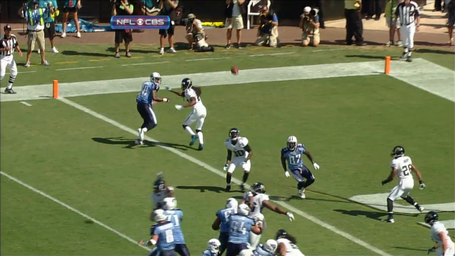 Kenny gets a clean, free release and immediately locates the football on the fade route. 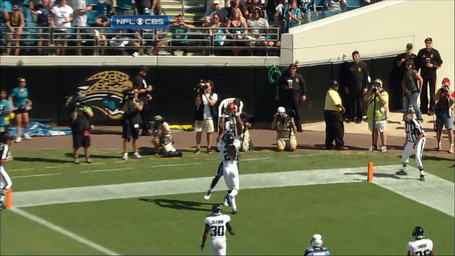 Britt tight ropes the side line, but keeps enough space to give him self room to get down. The key thing here - and something that doesn't necessarily show up well in stills - is Kenny's ability to high point the football. Considering the lack of lateral agility required, I was surprised to not see more of this in 2012, and I'm interested to know if this is more symptomatic of the injury, play calling, poor QB play, or some mix of the three. 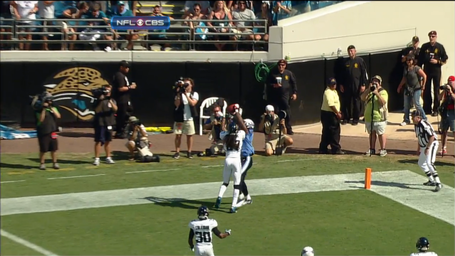 Kenny does a great job tapping both feet down and gets a third tap in for good measure. 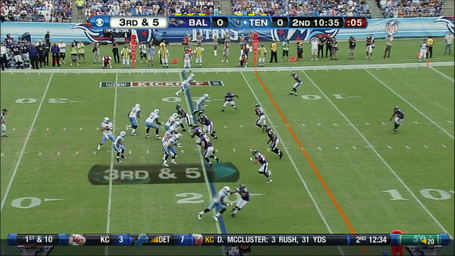 Basic play here, but an important one. Tennessee likes to line up in these 3 x 1 sets. Those sets can be great, but to really make them hum you need a WR who can beat press in isolation on the back side. Note the down and distance here: 3rd and 5. Baltimore is in man against Kenny. He breaks outside selling a vertical route. Notice how he's gotten the corner's hips turned. 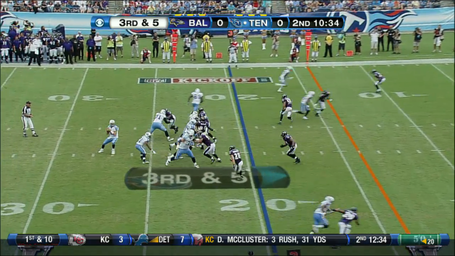 Kenny quickly breaks back inside and uses his hands to slap away the defender. The corner is now out of position and playing catch up. This leverage provides a clean, easy target for the QB. 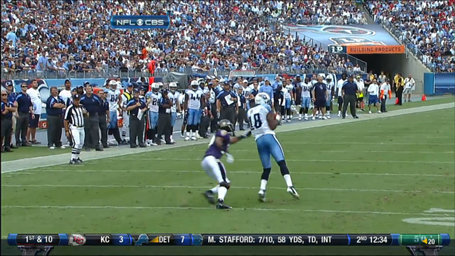 As the ball gets to Kenny, he extends to get it (not in this frame), but the ball ends up getting into his body. Not a huge deal. The result is fine, and the solid technique on the route gives some margin for error. However, in tighter spots, this has a higher probability of getting jarred loose. You'd like to see him attack and catch the ball with his hands. On plays like this, you do question whether the knee would affect him as the lateral "sell" is what made this route so effective. 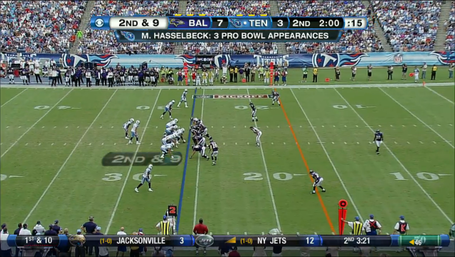 A fan favorite of MCM and Dowell Loggains: the WR screen pass. Highlighting Britt's versatility, Palmer has him lined up in the slot here to run a bubble screen. 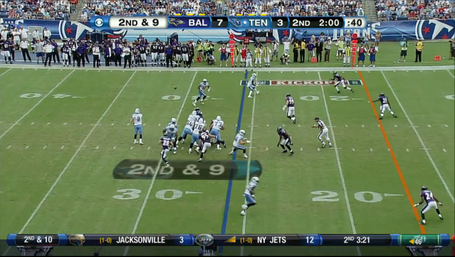 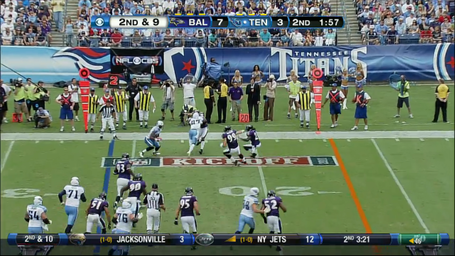 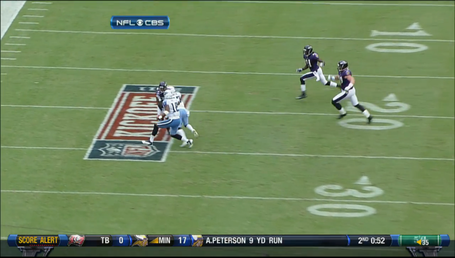 Hasselbeck swings the pass for Kenny who accelerates to the sideline behind his blocker Lavelle Hawkins. Kenny's lateral path has three defenders flowing towards the sideline. In this still, Kenny is about to plant and reverse field, something that his injury may have prevented this year. 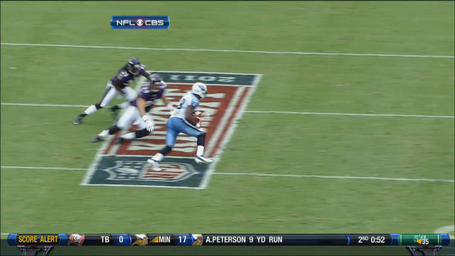 Kenny cuts back and gets vertical. The result is a nice medium gain. Immediately after this the Titans went right back to Britt on another screen pass that went for 6. When we think of Britt, speed doesn't really come to mind. Perhaps that's the perception his big frame gives us, but Kenny has (or had) more speed and wiggle than we give him credit for. That's represented in the above play where he takes a broken or average play and turns it into a moderate gain.

The "Back Shoulder" Fade 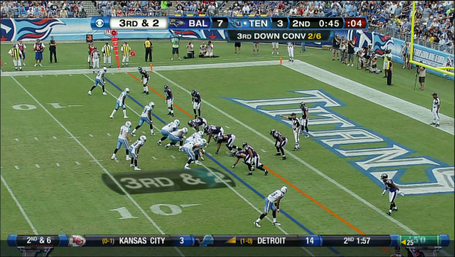 3 x 1 set again. Kenny Britt is isolated on the backside of the play. Best guess: Kenny is reading leverage and adjusting his route according to coverage. 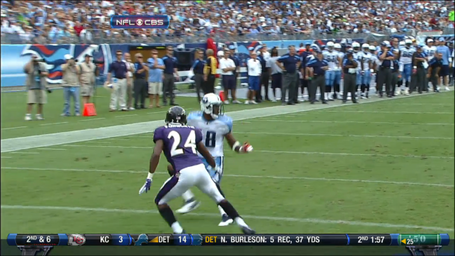 Kenny gets into his vertical stem and into the endzone. The defender's leverage dictates that Kenny work towards the sideline and that's what he chooses to do. Britt plants his inside and pivots off the outside foot, almost like posting up in basketball. 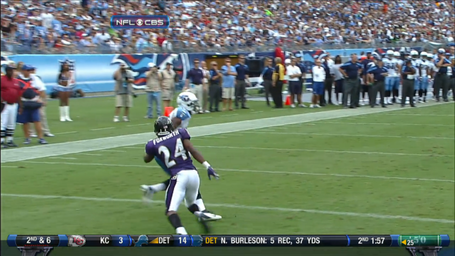 Britt executes this motion quickly and precisely. Sells the defender down field, spins outside and is now working towards the sideline. 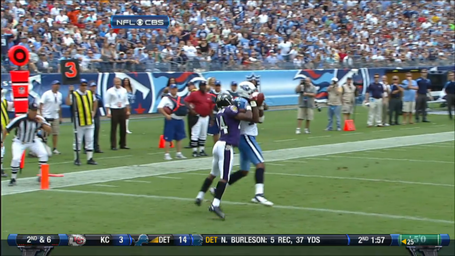 The term back shoulder is in quotes because this is actually a poor throw to the inside shoulder which ends up making this catch more difficult than it needed to be. A throw to the outside would go virtually uncontested. Regardless, Kenny makes a play on the ball for a touchdown. This is probably my favorite play of Kenny's in this post. Solid technique and understanding of leverage in the red zone combined with a tremendous physical skillset. Again, there is quite a bit of planting and cutting on this play. As with others, those cuts may not be violent like those of a RB, but they are lateral moves all the same. It will be interesting to try and understand that impact on Britt's game in 2012. 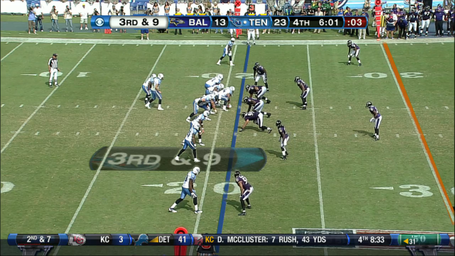 Interesting positioning here. Kenny is in the nearside slot, much like the Saints like to use Marques Colston. They'll have him run a vertical seam route from this spot. 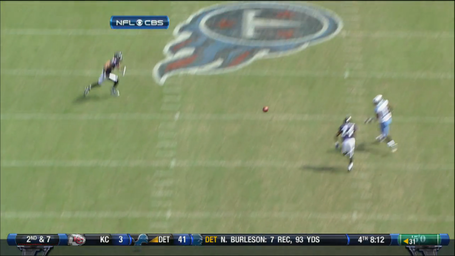 Not many bells and whistles to this play, but it is impressive nonetheless. Britt takes the clean release, gets vertical, and continues vertical up the seam. He's taking advantage of Foxworth again, whom just put a clinic on in the red zone earlier in the game. Hasselbeck cuts the ball loose and places it in the soft spot in the deep zone. 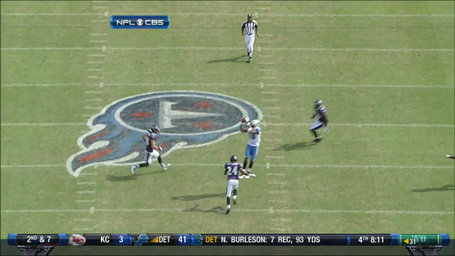 Again, Britt does an excellent job of high pointing the football. 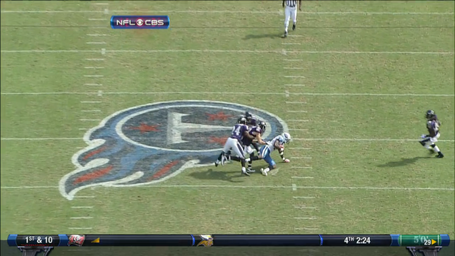 Britt shields the football and wisely goes to the ground, averting the big hit.

Watching these plays and the creativity to move Britt around within formations, one can't help but wonder what might have been. Into his third year, you get the feeling that Britt was beginning to understand the finer points of the game, even if he's still an unfinished product. I'd often just thought of Britt as a big split end that leaned on physicality and athleticism to win matchups. However, at least in these few games, Britt showed some flashes of brilliance and refined WR play. He leaned on agility and lateral moves more than I had anticipated, which is something that may have played into his struggles in 2012.

For the next part in this series, we'll look into Kenny Britt's 2012 season and try to better understand his lack of production. Stay tuned....