Week 10: Predictions From The Contributors and J3G77

Week 10: Predictions From The Contributors and J3G77

Share All sharing options for: Week 10: Predictions From The Contributors and J3G77

No perfect score last week. DReese got close. College boy gettin' all smart apparently. Our more Northern Dan is still perfect on the season. SuperHorn is not. J3G77 kicks us off this week:

A home game against the Jags is a terrific time to open up the offense and turn Locker loose. Let Jake get back into a rhythm and don't let up. It's also a great time for the defense to get back to their aggressive blitzing. The defense should be able get to Henne early and often, forcing enough stops and/or turnovers that will allow the offense to be able to get both CJ and Greene plenty of carries (Personally, I'd love to see Mooney get a TD.). This should be a blowout by halftime, but division games are usually tougher and in the past they've managed to lose these games by playing down to them, but I don't see that happening this week. Titans roll.

Divisional games can be tougher than expected, even when they involve winless opponents. We learned that lesson two years ago. Lose this game and the whole team and coaching staff should rightfully be under fire. Once again I find myself concerned that we’ll play too conservative against a far inferior opponent but even still we’ll have enough to get by the Jags.

Titans get above .500. No way they let the Jags win because if they do, it may be the end of me. I envision a magnificent runaway game akin to the first half of the Jets earlier this season. Titans will win convincingly setting up a monster Thursday night game against the Colts.

The Jags suck. Hopefully Munch had been showing film of that disaster in Indy 2 yrs ago so the Titans don't overlook them.

I don't know why I am nervous but I am. The Thursday night game is going to be HUGE. I hope I am the only one looking ahead.....we have to win this one first. I keep dreading the Mike Munchak Loss™. Hopefully we don't see another one.

The Titans face off with their "once a year kryptonite" in the winless Jaguars. This will be an opportunity for the team to work on putting all the pieces together. The Titans run game will get going again, but I think it will be Locker who steals the show. The Jags aren't the worst on defense, but their offense throws them to the wolves far too often, leading to a lot of late-game points allowed. I think the Titans wear them down, and play more aggressive on defense with Griffin back in the line-up. Definitely not a game to overlook, but I am confident the Titans get it done in convincing fashion.

Titans need to stay focused and get this win.

Titans demolish the Jags. This is the worst professional team I've seen in a long time.

The stars are aligning at the right time for the Titans. Despite some mistakes from Jake Locker, the offensive line and running game excelled on the road against a defense that had just held Marshawn Lynch and Russell Wilson in check. On the defensive side Tennessee needs to get back to the blitz-happy defense it was earlier this year, and there is no better time to experiment than against the Jags at home. I expect this to be a blowout until halfway through the forth quarter when someone misses a tackle and let's the Jags finally put points on the board.

The Titans need a good ass kicking. Most of the games this season have come down to the wire, but not this one. Jake Locker and Kendall Wright put up career numbers, CJ runs all over the field, and the defense almost manages a shutout until they allow a garbage time TD.

That's urrbody pickin' the Titans this week. Hope it works. You guys called for the blowout last week and didn't get it. That makes you (2-5). That's worse than SuperHorn!

Kinda off topic: I finally followed BP on Twitter this morning. Not sure what took me so long cause I LOVE THAT MAN. But I was looking through his pictures and this one made me laugh hysterically: 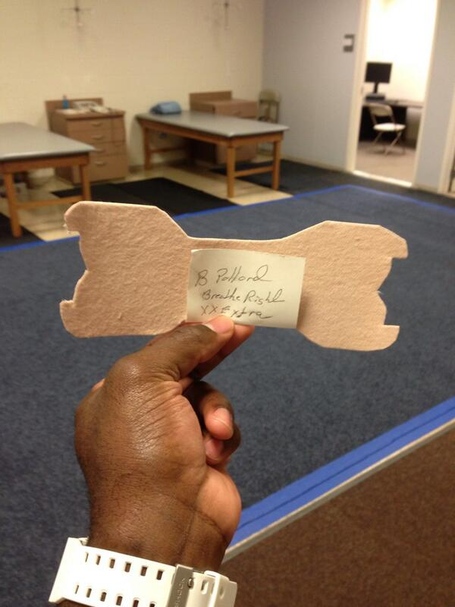