A closer look at Ryan Fitzpatrick's touchdown pass to Delanie Walker in the closing minutes of the loss to the Colts.

Share All sharing options for: Titans vs. Colts: Breaking down Delaine Walker's TD

Again, Ryan Fitzpatrick did a lot of stuff really well in the game against the Colts. His touchdown pass to Delanie Walker was a really nice anticipation throw, and a nice play design from Dowell Loggains. Here is what the pre-snap formation looked like (CJ's route not highlighted because he jogged out into the flat) : 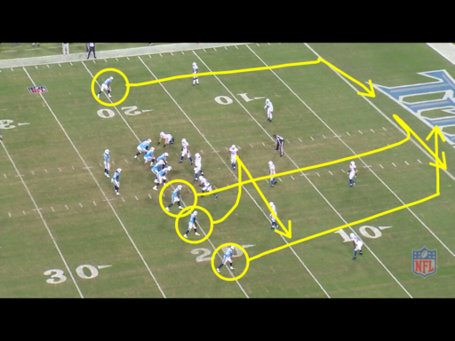 Here is what it looked like right before Fitzpatrick released the ball: 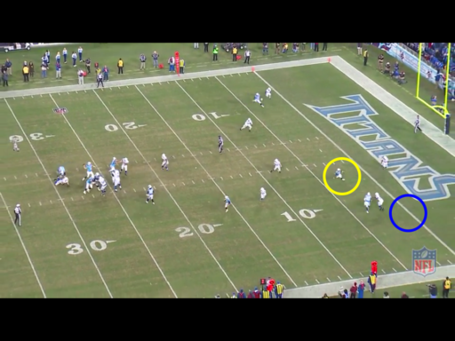 The yellow circle is Delanie.  The blue circle is about where he caught the football.  Fitzpatrick saw that the safety in the end zone had no chance of getting to the spot where he was throwing the football.

I hope we see more of this offense in the coming weeks.  Fitzpatrick conceivably could have gone this entire game without throwing an incomplete pass (all 4 incompletions were drops, in my opinion).  This is the best way the Titans have to score points right now.

The emergence of Delanie Walker has been a very pleasant surprise.  There was a lot of debate last year about what the Titans should do about Jared Cook.  At this point there is absolutely no question that the Titans made the right call when letting Cook walk and signing Walker.