Titans-49ers: On the Akeem Ayers penalty

A few thoughts on what turned out to be a huge penalty in the Titans game against the 49ers yesterday.

Share All sharing options for: Titans-49ers: On the Akeem Ayers penalty

Take a look at the play: 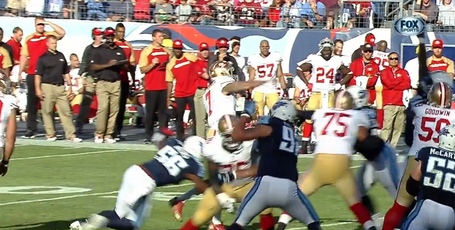 Ayers has just made a "dip" move to get around the tackle, thus he is already low.  If he is going to make a play on the quarterback here, he has no choice but to hit him where he did.

What I wish the referee would do here is take all of this into consideration and not throw the flag.  The intent of the rule is to keep guys from diving at the quarterbacks knees to try and cause and injury.  That is clearly not what Ayers is doing here, but there is nothing in the rule that allows for referee discussion.  With that being the case, this play is going to get flagged every time.  Sucks, but that is life in today's NFL.