49ers vs. Titans- How do you stop Vernon Davis?

Vernon Davis is the one vertical threat the San Francisco 49ers have. How can the Tennessee Titans take him away?

Share All sharing options for: 49ers vs. Titans- How do you stop Vernon Davis?

Vernon Davis had the best game of his career last week against the Cardinals.  He caught 8 passes for 180 yards and 2 touchdowns.  One of those touchdowns was 61 yards.  It was his second 60+ touchdown reception in as many weeks.

Davis is the only deep threat the 49ers have right now.  It would seem easy enough to take him away knowing that, but that is much easier said than done.  The problem with stopping Davis is two-fold:

1. He is a match-up nightmare- He is too athletic for most linebackers and safeties, and he is too big for most corners.

2. Colin Kaepernick is always a threat to take off and run.  He gets outside of the pocket and defenders forget to play their assignments.

Let's look at Davis's 61-yard touchdown catch against the Cardinals.  Arizona lines up with a single high safety.  My guess is that his responsibility is to play center field: 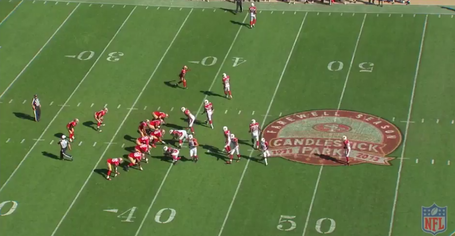 But as you will see, as Kaepernick escapes the pocket, the safety gets caught with his eyes in the backfield: 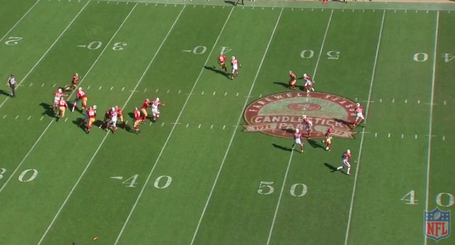 Just that much of a hesitation is enough to allow Davis to get behind the defense.  The result is a 61-yard touchdown: 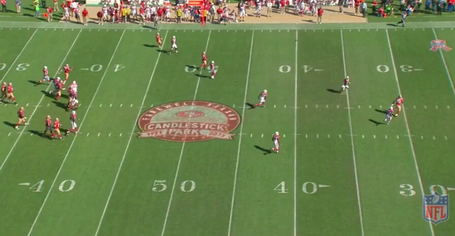 It will be interesting to see how Jerry Gray and Gregg Williams decide to defend Davis.  The one thing that you absolutely have to do is get your hands on Vernon at the line of scrimmage.  He will kill this defense all day long if they allow him to have a free release.

The Titans are one of just a few teams in the league that have options when it comes to defending Davis.  They could take the approach the Patriots did with Jimmy Graham and have a corner follow him all day.  The 49ers receivers aren't spectacular, so they could afford to pull Jason McCourty or Alterraun Verner inside to shadow Davis.

Another option is Zach Brown.  He is athletic and big enough to be able to match-up with Vernon.

They could also use George Wilson on him.  Wilson is really good in coverage and using him would allow the Titans to leave their regular safeties in the their normal positions.

Whatever the case, the Titans should be determined that they are not going to let Vernon Davis beat them.