Titans vs. Seahawks: Ryan Fitzpatrick leaving points on the field

The Titans played a terrible game on offense in Seattle and still had a chance to win. Here are some of the plays where Ryan Fitzpatrick left points on the field.

Share All sharing options for: Titans vs. Seahawks: Ryan Fitzpatrick leaving points on the field

This is going to be my last post on Seattle.  I think SuperHorn still has a film review, but it is time to move on to San Francisco.

Jamal said on Twitter that not enough people were talking about how bad Ryan Fitzpatrick played in this one.  The truth is he was terrible, and there are a handful of throws that really killed the Titans in this one.

Also, some people have been killing Dowell Loggains.  That is unfair.  He called a good game- especially in the passing game.  As you will see, the Titans had ample opportunities to put points on the board against a really good defense.

The first throw we will look at comes in the first quarter with the Titans backed up against their own end zone.  Fitzpatrick connected with Kendall Wright for a 32 yard gain.  That is good, but as you will see, an accurate throw could have gone for a 97-yard touchdown.

Here is what it looked like when Wright came open:

Here is where Wright catches the ball: 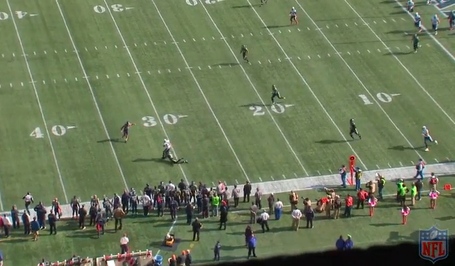 There is no way the safety catches Wright if the ball is thrown up the sideline.  The Titans did end up getting a field goal on the drive, but they could have had 7.

The Titans actually had another chance to get 7 on the same drive when Damian Williams came open in the end zone:

If Fitzpatrick throws the ball anywhere in that circle it is an easy TD.  Unfortunately he threw it a little bit too far and Williams wasn't able to come up with a tough catch.

The next play we look at comes on the very next drive:

Look at how wide open Nate Washington is.  Gramsey could have hit him.  Instead Fitzy throws off of his back foot and floats the ball over Washington's head into the hands of Earl Thomas.  Washington probably wouldn't have scored here, but it would have been a big gain.

The next play comes after the Titans recovered a fumble deep in Seahawks territory: 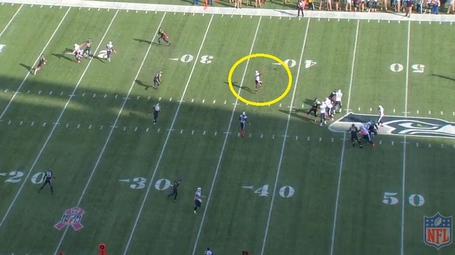 Wright is wide open here.  All Fitzpatrick has to do is get him the football.  He could have easily picked up a first down.  That would have put the Titans in field goal range even if they didn't gain another yard.  Instead they had to punt.

The last play is the interception to Richard Sherman.  I don't think I even need to comment on this one:

OK, I will- JUST THROW THE BALL TO THE SIDELINE!

There, now I feel better.

In conclusion, hurry back Jake!