Breaking down Colin McCarthy against the Seahawks

Titans MLB Colin McCarthy saw his first extensive action of the season in Seattle after Moises Fokou went down with an injury. How did he do?

Share All sharing options for: Breaking down Colin McCarthy against the Seahawks

Last night this question was posed to me on Twitter:

I hate to say this because I have always been a big fan of Colin McCarthy, but he played really poorly on Sunday. He looked like a guy that had been on the sidelines for most of the season. Now granted he has, but he cannot afford to look like that if he wants to get his job back.

Here is the first opportunity McCarthy had to make a play: 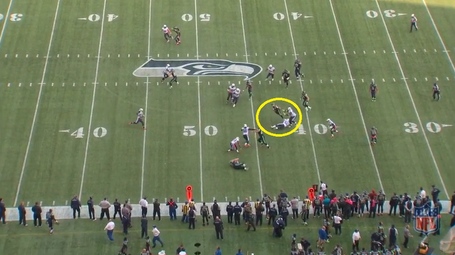 That is a bad miss on play where McCarthy could have stopped Lynch for basically no gain.

Here is more of the same:

He had a chance, one on one, to bring Lynch to the ground after a reception. He wasn't able to do it. (I do have to say that he had pretty good coverage on the play)

It is hard to know what gap McCarthy had here, but it is pretty clear that he allows himself to get blocked out of the play. Lynch was able to walk into the end zone.

He was one on one again with Lynch here and was able to make a very nice open field tackle.

Then he ended the day with a horrific miss that allowed Lynch to pick up a first down and end the game:

McCarthy is a really good player, and I think he will bounce back this week if Fokou isn't able to go, but he played really poorly in this one.