Breaking down Nate Washington's 71-yard touchdown catch against the Lions.

That was one of the best catches you will ever see. It is impossible to put into words how far Nate Washington has come since his first season with the Titans when we all hated him. He has gone from the receiver known as "Hands" to the most consistent playmaker on this offense.

The catch itself was clearly amazing, but what is even more amazing is that Nate was able to stay on his feet after coming down with the ball. Check out the frame by frame: 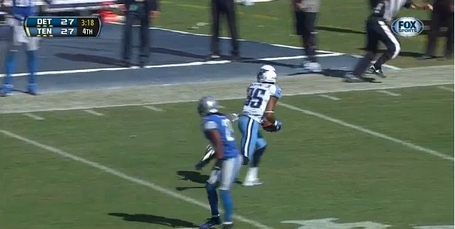 He starts off the play running down the field with his back to Jake Locker. He then finds the ball and jumps and turns at the same time. After catching the ball, Washington is able to then turn his body all the way back around and run down the field.

It is also awesome to look at the defender on the play. In picture number three he has no idea where the ball is. He finds it in picture four.