Share All sharing options for: Taylor Thompson Lays the Wood

Darius Reynaud had a big day yesterday. He made a very nice lateral to Tommie Campbell that led to a touchdown, and he had a 105-yard kickoff return for a touchdown. The return was awesome, but the highlight of that play was Taylor Thompson's block. GIF! after the jump.

As if that wasn't awesome enough, here is a still of the block: 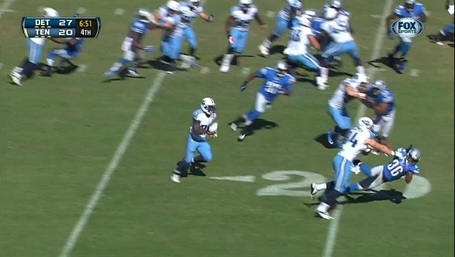 Thompson has yet to make a contribution on offense, but he has shown up on special teams.

Mike Munchak said yesterday that he thought Jared Cook would be available for the game against the Texans, but even he cannot be sure of that until they get the results of the MRI back. If Cook is going to miss time, Thompson could see an increased role on offense. Craig Stevens did a nice job yesterday, but he doesn't give a defense the same match-up problems that guys like Cook and Thompson do.