These past two losses have been painful. It's created polarization among the fanbase. CJ's camp. O-line's camp. Locker's the problem. Locker needs help. Regardless of where you stand on all these points, we can all agree that we have offensive issues. Problems that, when watching the game in real time, seem almost insurmountable. The offensive line isn't getting off blockers and to the second level. There are break downs in passing protection. CJ looks tentative. Locker isn't always making the right reads. All these things are legitimate concerns.

Instead of continuing to point fingers, I thought I'd take a stab at providing solutions. It's a cathartic exercise. I wouldn't expect these changes implemented by the coaching staff. It's more about exorcising my own demons. Trying to make some kind of peace with the fact that we're not at a total personnel disadvantage, and there might be ways to create better use of our players.

Looking at those items, I'd say it's fairly obvious why plays from under center have little to no utility for us. CJ isn't getting down hill. Even on designed power runs, he's ad libbing and trying to get the edge. He isn't hitting the hole with conviction. This isn't finger pointing. It's just a fact. Of course, it may be symptomatic of other issues within our offense, but if the back is dancing at the point of attack then you're losing some of the advantages of running from under center.

As for the play action, well until the run game gets working, you're probably not going to get much action anyways. Further, we aren't taking many (any?) shots down field off play action at this point in the season.

Alternatively, running from the gun puts CJ in a more favorable environment The man loves working in space (or maybe he hates contact, I can't decide which). Right or wrong, I don't see us fixing his problems mid season. So, the best solution is to get him the ball as quickly as you can post snap. Getting him the ball earlier allows him to use his speed and acceleration to beat defenders to the point of attack. It also allows more time to read the defense and attack his preferred lane with more purpose. With a back as fast as CJ, I've always thought that time between the snap and exchange is precious wasted time. The sooner you get the ball in his hands, the more advantageous the situation.

2. Install a heavy dose of zone read. We ran it once against New England. It was executed incorrectly and then abandoned. I believe this type of play needs to be our base running concept. From the New England game: 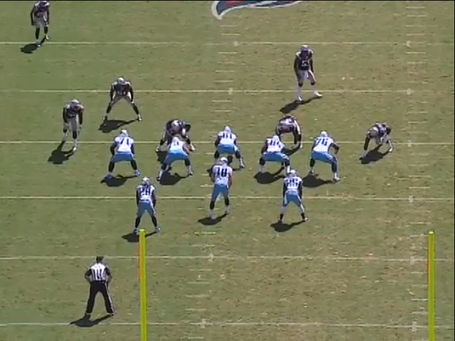 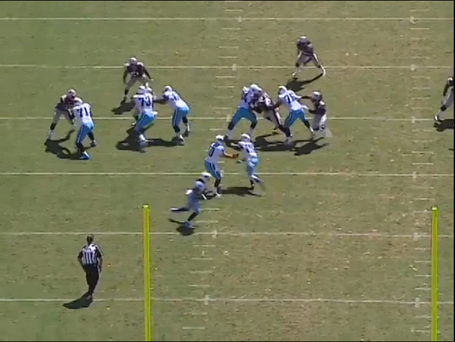 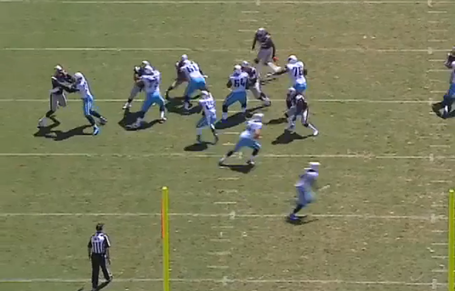 In this example, Jake gives the ball off to Reynaud. To New England's credit, the defensive end plays disciplined. Belichick's talk of playing a mobile QB wasn't total lip service. I'm sure he made it a point to make his edge defenders aware of Locker's mobility. Still, the end crashes enough that Locker should have kept this ball.

For those unfamiliar with the zone read, here are he basic Cliff's Notes. Offensive line zone blocks to the left (sticking with the above example). The backside end is unblocked. The QB reads that defender. If he takes QB, hand off to RB. If he crashes to RB, QB keeps it. What this essentially does is create a numbers advantage. Under a "normal" scenario, that backside end is able to run free and attack the running back. In the zone read scheme, the end becomes the QB's "man".

Back to the example at hand, Palmer adds another wrinkle. On the backside of this play, not only does Locker have the ability to keep the ball, he'd be running the option with CJ. Considering that CJ has no intention (or is gunshy) of running between the tackles, it seems that the best thing to do would be make peace with what we have and build that mindset into our scheme. In other words, if CJ wants to get into space, let's get him into space and see what happens.

The obvious risk with the zone read is that it exposes our QB to punishment. There are QB's who can avoid the big hit, and other's who struggle to avoid major contact. Jake seems to fall in the latter camp. Perhaps that's a case of him being a competitor, or maybe he's just not shifty enough right before contact. Whatever the case, the QB slide would need to be a major coaching point to protect our young gunslinger.

3. Work to get more horizontal stretches. This one's a no brainer, but it's difficult to implement from under center. There are a few ways to create some horizontal stretches in the run game, but all of them must come out of the shotgun. Chris Brown covers this like a pro over at Smart Football. Be sure to read this. Here are a few ways to stretch the defense laterally...in no particular order:

The idea is to put a quick passing game concept that attacks the linebackers to one side and to direct the quarterback to look at that route: if he’s open, throw it; if not, that means the near side linebacker has slid out, thus opening up the draw.

These things aren't revolutionary concepts. And, they aren't going to send defenders scrambling all over the field. The intention is to, at a minimum, create some hesitation, and, at best, bind a defender. As it is now, defenders can pursue the ball carrier without consequence. Install concepts that punish those tendencies, and the aggression becomes more manageable.

4. Get vertical. When Jake Locker was at his best last year, we were stretching the field vertically. We saw that some against New England, but it all but vanished against San Diego save a few plays in the 4th quarter. When I mean get vertical, I specifically mean the verticals concept itself.

5. No huddle. I wrote about this in the offseason, so be sure to check that out as a refresher. For the majority of snaps, the Titans appear content running "11" personnel. With that being the case, why waste time with a huddle? Now, there are substitutions, but consider that substitutions are at the preference of the offense. So, if they like the match ups they are getting, they can keep those match ups on the field. Be sure to watch New England, Baltimore, and Atlanta if you want to see these concepts in action. It's a simple concept, yet when run effectively it is extremely powerful.

All of these things, in my mind, are fairly basic ideas. The fundamental principles of the offense could still remain in tact. Route combinations can stay the same. Run concepts don't change. Even though they are now from the shotgun, we can still run inside/outside zone and power (ie. our staples). The disadvantages seem close to none. Yet, even though we'd be running a very similar version of the current offense on paper, the offense would create entirely new challenges to defend. We're not trying to re invent the wheel here. All these changes would do is allow our skill players to punish the defense for being overly aggressive. In doing so, I feel we'd see improvement in every facet of our offense.