On the first drive of the game, Locker threw a horrible, head scratching interception. I'll save you the pre-play narrative, and just cut to the meat and potatoes. Through the link for the pretty pictures. 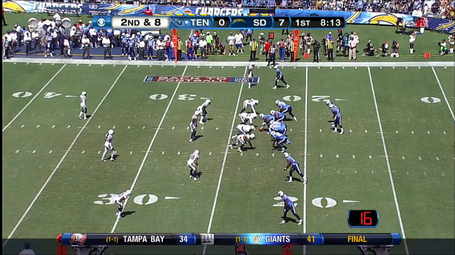 Pre-Snap look #2 - The safety has now rolled down into the box. Deep safety is rotating to deep middle. Safety blitz is a distinct possibility. It's likely 5 are coming, maybe more. In the secondary, we are most likely looking at Cover 1 man under or Cover 3.

Let's note some other things here. To the right hand side of the play, Wright is working 1 on 2 (Corner/Linebacker). Unless that linebacker blitzes or comes up in man on CJ, there are likely better options in the pattern. To the strong side, we assume that the safety is coming on the blitz. If he does, we're working 3 on 3. At worst, we're working 3 on 4 if the safety stays in coverage. Still more likely we find a man open with those numbers. 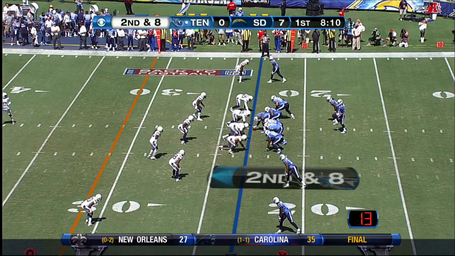 Now, with routes. Simple slants. Though, I wonder if one of the three receivers to the strong side was supposed to run an out or flat route. Ie, did Kenny or Cook get hot when they weren't supposed to? 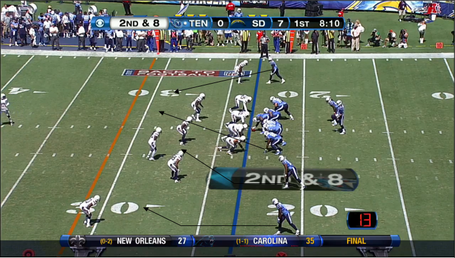 Finally, with a coverage diagram. Let's note here that there's a chance Locker thought the LB that drops into zone would be covering CJ. His alignment suggests that's a possibility. Even still, the second that he notices that LB is in his drop, he's got to get his eyes to the other side of the field. Further, against Cover 3, either Cook or Britt is likely open on their quick slants. Against man, the throw to Williams against soft coverage is a gimme. I think Locker "read" Wright in single coverage, and thought he could win in isolation, but post snap realized that wasn't the case. 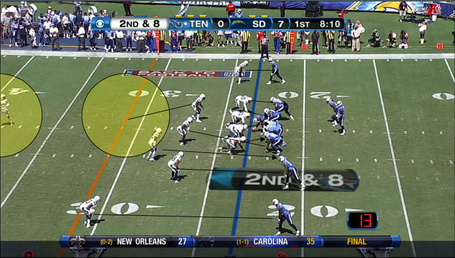 Ball is snapped. Blitz is obviously coming. Protection is fine save the Velasco getting bull rushed, which we'll see in a second. We've got 6 on 5. 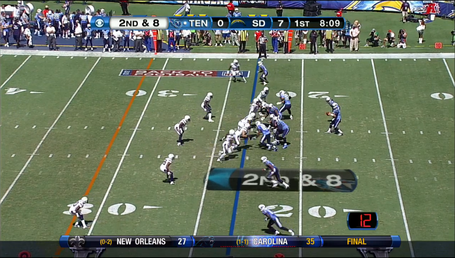 There's obviously a zone defender underneath at this point. Note that Velasco has begun getting bull rushed into the QB. CJ checks blitz, all is well, and he eventually peels off underneath. Jake's time is running out, but there is still a play to be made. He's got to begin the process of getting his head around to the other side of the field. There's clearly not a play to be made to Wright. 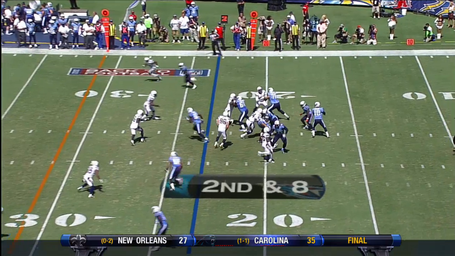 Locker stays honed in on Wright. Note, this all happens very fast. Still, it's part of the job. Locker has to recognize post snap (or, even better, pre-snap) that there's a defender sitting in zone and get back to the other side of the field. If he does so, he's got two receivers open. 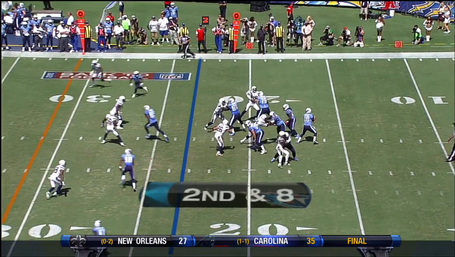 Yet, there's still hope. Outlet to CJ here. Instead, he's got his eyes downfield. Cook has now beaten his defender. He's running to the corner. And, usually against a single high safety, that's a throw that can be made. However, like most throws in the NFL, it's not one that can be made falling backwards off the back foot. 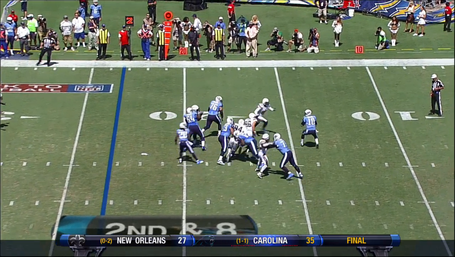 Ugh. The minute I saw this happen, and realized it wasn't a throwaway, I knew we were in trouble. 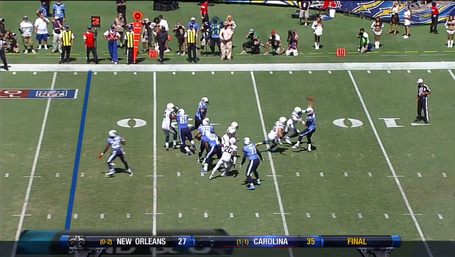 The late throw and extra air from throwing off his back foot allows the safety time to rotate over and make a play. Being off balance causes the overthrow which doesn't even allow his teammate to make a play on the ball. 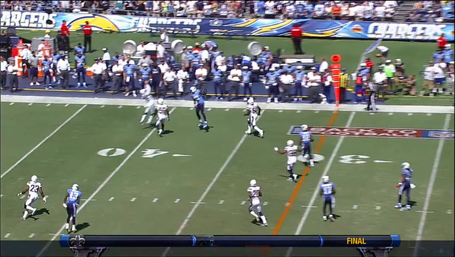 Just a terrible play all around. It's highlighted by the fact that it could have been a successful play if Locker targeted Williams, Britt, or Johnson. All were open. Locker's got to find the open man here. These are basic routes against basic coverage. Plays like this lose football games. Let's hope Jake can learn from this and move on.