Share All sharing options for: Locker to Wright - Alert to Single Coverage

I'll have my thoughts on Locker in the coming days. Today, I just wanted to check out the highlights again while I had my morning coffee. With the first offensive highlight of the night, something exciting stood out that I hadn't noticed last night.

Situation is 2nd and 1 from the 9 yard line. Titans line up in 21 personnel in a strong I formation.

Pre Snap, the Cards show a 2 high look, but the safeties are rolling. Adrian Wilson is moving to a single high position and Kerry Rhodes is stepping into the box. Wright is on the Weak side of the formation. Wilson rolling to center field guarantees single coverage on the fade. 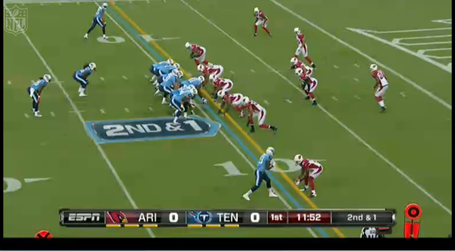 So, here's where things get exciting. Check out Leroy Harris, our right guard. He's pulling to the left side. Quinn Johnson is working towards the gap. This is a traditional Power O run that was called in the huddle. Quinn is going to seal the edge and Johnson is supposed to follow his lead blocker Harris through the hole. You can also notice Washington is creeping down towards the LOS to block.

Yet, that's obviously not what happens here. There's either a pre snap alert called here (typically a signal, or even just a look to the receiver), or there's a built in option to throw the fade (ie. Wright runs the fade in all cases that lets Locker throw it if it's open.) 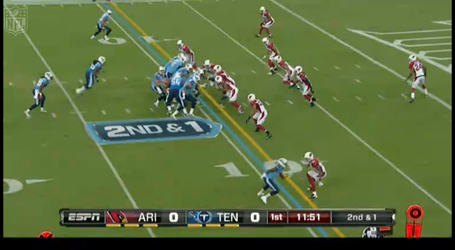 Nate is working down to block. CJ has hesitated to allow Harris to get into the hole, and will now begin looking fo the ball. Wright works to the boundary. He's at the Split End. My initial concern with him at this position was working in man against press coverage. Um...no need for concern. He puts on a clinic against one of the best young secondary players in the league in Patrick Peterson. 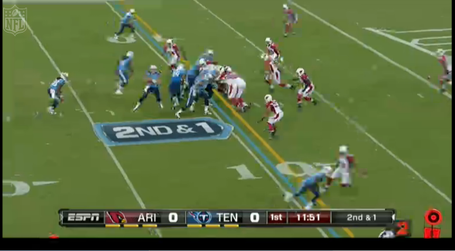 These stills really don't do it justice. Do yourself a favor and check out the highlights in real time. CJ is totally caught off guard. There's no action to him on the play. He just stands there. That's not a negative against CJ. It just highlights that this was a communication between Wright and Locker that was separate from the entire offense. 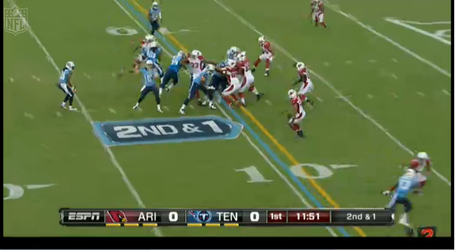 In these situations, QB and receiver are taught to throw based on leverage. PP7 isn't going to allow Wright inside. His leverage forces an outside release. And, that's what he wants. This is to the boundary (read: short) side of the field, so out of bounds is treated like an extra defender. Really, his technique is fairly solid. It's just a great throw and catch. When you hear people talk about throwing receivers open, this is what they are talking about. Locker reads leverage, throws to open grass, and lets his receiver make a play. 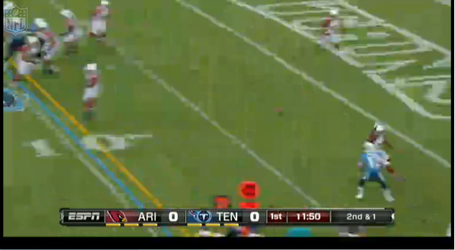 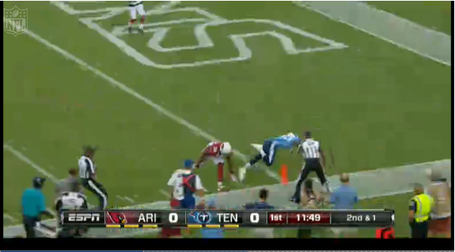 So much to be excited about here. The trust from Palmer. The recognition from Locker. And, finally, the execution by both our young QB and receiver. Textbook. Against this coverage, that throw is like stealing. Highlight of the preseason for me thus far.