I hope to have my full thoughts on the game up within the next few days. For now, I wanted to highlight Hasselbeck's 2nd interception. I bring this play up mainly because it really jumped out at me as an uncharacteristically bad decision by our veteran QB.

Titans are in the shotgun. 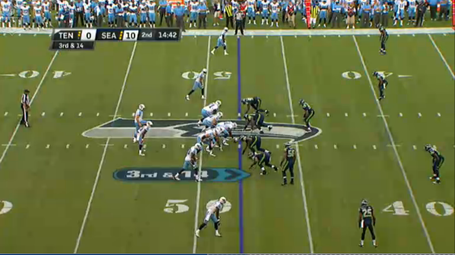 Missing from this picture is the single high safety over the top. Without access to a wider angle, I can't be sure of the placement of the safety. However, based on the alignment of the other 4 DBs, I'm guessing the safety is playing centerfield. No less, pre-snap indicates that we're likely looking at soft man under with a single high safety over the top. 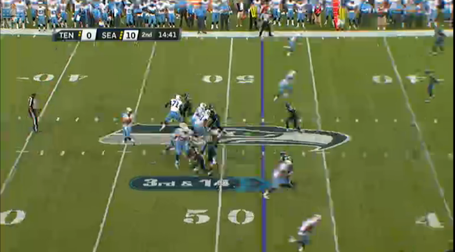 At this point, Hasselbeck has already made his decision. All 4 receivers are working to get their vertical stem. Hasselbeck's eyes are on the right side of the field the whole way, and the safety reacts accordingly. 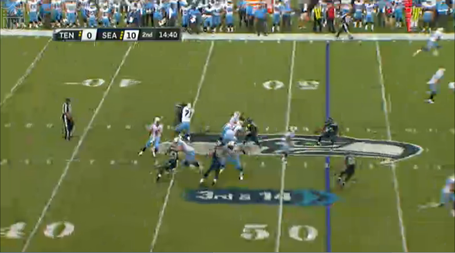 It should be clear to Hass by now that there is a roaming safety over the top. 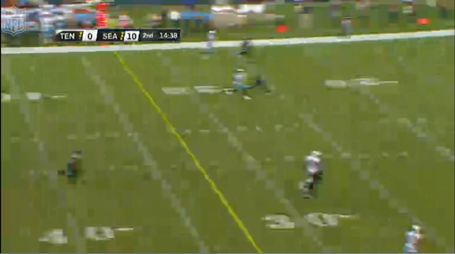 Look to the weak side of the field. Both receivers are working in single coverage. The safety is out of the picture because he's already rolled to the right side of the field given that Hass was looking to Williams from the beginning. 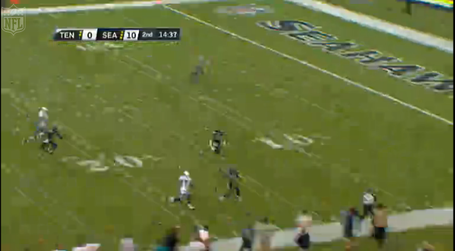 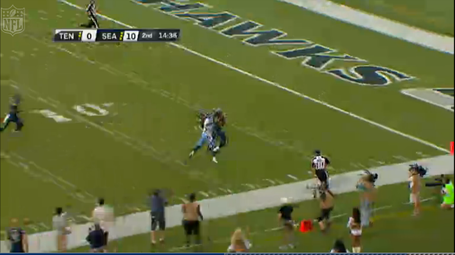 Double coverage results in an INT.

Not what you'd expect out of a savvy veteran. It is just a preseason game. However, when you're jockeying for a starting job, these things matter. Hasselbeck's strength is supposed to be in is solid decision making. That's not what we saw here. The roaming safety needs to be manipulated, and then the ball thrown away from the safety's leverage. Making the decision presnap, and then telegraphing the throw the whole way is supposed to be the kind of mistake we'd expect out of our up and coming QB, not the established pro.

This is just one play, and it's not necessarily indicative of what we might expect for a full season out of Hasselbeck. Still, when we get further along in the decision making process at identifying our starting QB, things like this can add up. Athleticism and arm strength are the types of things Hasselbeck can't affect in this competition. That advantage is always going to go to Locker. It's decision making that's supposed to distinguish Matt from Jake. As soon as that comes into question, the decision about who should start against New England becomes an easy one.