Tennessee Titans and the No Huddle Offense

Share All sharing options for: Tennessee Titans and the No Huddle Offense

About a month ago, CBS Rapid Reports released a quick post noting that the Titans ran a good bit of no huddle sets during one of the days of our OTAs. A few weeks later, a report surfaced that the Titans were adding fast paced workouts to their training regimen. These got the wheels spinning. Are these indicators that the Titans are moving towards a full blown, no huddle offense? Probably not. Should they be considering such an offense? Absolutely.

Smart Football had an excellent post in mid April regarding the no huddle and the NFL. Be sure to check out the entire post, but Brown covers a number of primary points in the first paragraph:

It’s only a slight exaggeration to say that huddling is an archaism destined for the dustbin. I say it’s a slight exaggeration because there is a value to huddling, primarily when you have a great leader at quarterback as a huddle is an opportunity for him to show his leadership skills. But otherwise, it’s inherently inferior to going no-huddle. It’s slower, which is a problem both in games but also in practice where your offense gets fewer reps, and, maybe most importantly, the safety net of a huddle leads coaches to transform plays that can be communicated in just one or two words into multi-syllabic monstrosities. That’s the sad secret of those long NFL playcalls: They convey no more information than can be conveyed with one or two words or with a combination of hand-signals.

In the days of Fisherball, there were merits to things like ball control and time of possession. If you're trying to grind out an opponent and manage the clock, these things can have their place, I suppose. However, much of that goes out the window when the focus shifts to more of a finesse and aerial oriented attack. Under that sort of offense (like the one we ran last year), the primary goal should be simple: Score as many points as quickly as possible. Huddling actually works against that goal. Time spent conveying long playcalls is time that could be spent putting the offense to work and allowing for more possessions.

There are numerous reasons to run the no huddle. For good reason, there are entire books written on the subject. Today, we'll just get into the reasons that the Titans, specifically, should run a no huddle attack. This type of offense isn't for every team, in my opinion. However, our unique "11" personnel grouping creates some versatility that most teams don't have on their roster. That personnel grouping allows formational possibilities that are not otherwise available (at least effectively) to other NFL teams.

Our standard, no huddle personnel would be as follows:

QB- Hasselbeck or Locker (though, I think Locker creates some unique advantages with his legs that Hasselbeck does not)

The drive starts with this personnel, and other than quick positional substitutions which should be limited, the grouping always stays the same. Really, our personnel is what makes this situation such a matchup advantage. No doubt our other receivers fit in nicely with the amount of speed that we'd be putting on the field. However, it's the versatility of our Tight End and Running Back that put the Titans in a unique position.

Grouping our personnel in this manner puts pressure on opposing defensive coordinators. That pressure gets further compounded when you force a coach to put personnel on the field and commit for an entire series. For example, in a traditional huddle scenario, we can send this personnel into the huddle on first down, and the opposing defense can send out their base 4-3, or even Nickel, without too much risk, as there's a good chance of a run play. Conversely, if it's 3rd and long, the coordinator will likely send out a Nickel or Dime look.

When pressed with the decision for grouping personnel for the length of a series, the dynamic changes. Run out a base 4-3 (or 3-4) and you're putting a LB or Safety on a receiver every play. Alternatively, if you go with a Nickel or Dime look, that creates a mismatch in the run game. And, in all situations, a Safety or Linebacker will be served with covering CJ and Cook, which on it's own is a mismatch. The knife continues to get twisted when you hurry up the offense and force the defense to make calls from the sideline. The pace (and conditioning) will be familiar to the offense, and foreign to the defense allowing plenty of room for defensive miscommunication and players out of position.

Those personnel mismatches create advantages in and of themselves, but the way this grouping can be used in formations is probably equally exciting. 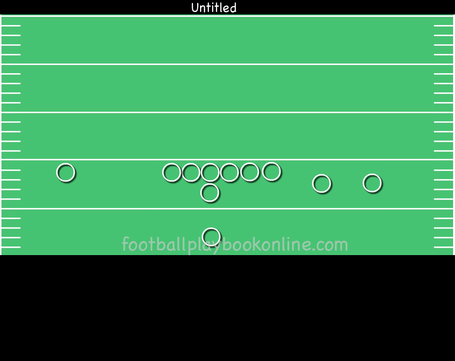 This formation, or some variation of it, is probably what comes to mind when you think of "11" personnel*. From this formation, we can run our basic sets of run plays; inside, outside zone, and the stretch play. Obviously, we can run a number of different pass patterns out of this set. 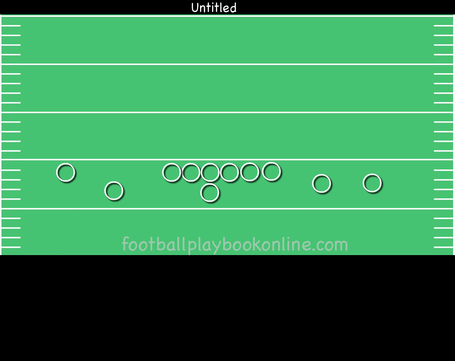 As you can see from the above formation, we can very quickly motion out of our basic run look into a 5 wide spread. CJ is in the slot to the weak side here. Depending on the defensive look, a screen to Chris Johnson could be an interesting call here. A number of different quick concepts can be run out of this formation. Slower developing routes carry risk with the limited protection. 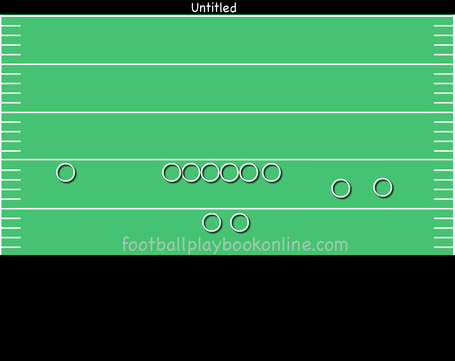 Here's a basic shotgun formation. Note that sometimes we like to move the positioning of the receivers around a bit. For instance, we'll move the Flanker up on the LOS, and move Cook off the LOS. These are small nuances, but the concepts that can be run out of this spacing is largely the same. One wrinkle, which I wouldn't want to use too much, is the zone read. For example, if the defense decides to sell out the passing game, and only leave 5 guys in the box, a handful of zone read plays could really keep the defense honest. By letting the DE run free and essentially making that the QB's "man", that leaves 6 linemen (including Cook) to block 4 defenders.

Beyond that, we can run a number of different plays out of this set. Including, but not limited to, switches with the H and Z to the strong side. Flood concepts. Smash play. Any number of two man and hi lo combinations. And, of course, verticals. 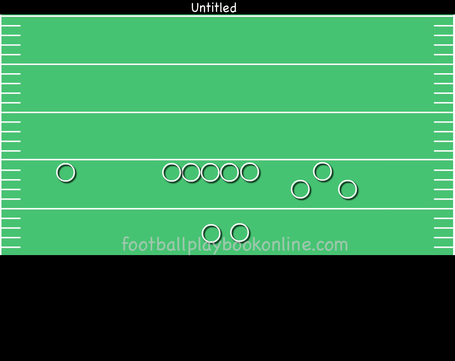 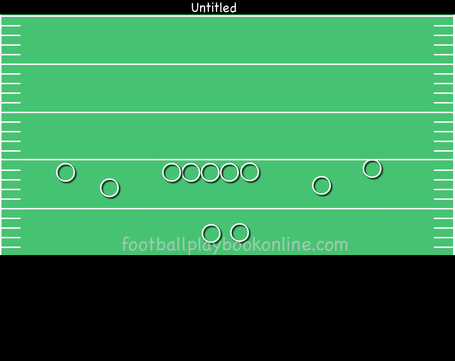 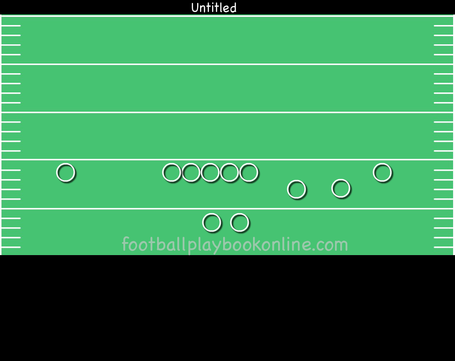 The above three (Bunch, 4 Wide, and Trips Right) are lumped together to basically just show the versatility of the grouping. Jared Cook's ability to split out and play/run like a receiver is a big distinction here. He's too big for a corner, and too fast for a linebacker. Other Tight Ends don't present this sort of mismatch (Craig Stevens, for example). Also, Cook doesn't necessarily have to be the inside receiver. We saw him split out wide in some cases last year. So, the above Trips Right formation could be, from left to right, Wright, Britt, Washington, and Cook. Alternatively, Cook and Wright could swap positions. Consider, too, that the team can line up in one formation and motion to another. The variability of this set is seemingly endless.

I'd say the likely hood of implementing this offense is fairly slim, but what is an offseason without some out of the box thinking? I really think the NFL is ripe for this type of offense. Even if it seems gimmicky (it's not), being different adds pressure to an opponent as they're force to gameplan for something uniquely different from the rest of the league. The Wildcat in Miami comes to mind. Most would say that's a gimmick, and they'd partly be right. But, it worked probably for two reasons:

1. The personnel of Brown and Williams was perfect for that type of play.

2. Opposing defenses were unfamiliar with defending that type of offense.

For the same reasons, I think the no huddle could work in Tennessee. The personnel lends itself to this type of offense, and this new look creates advantages just from being different (of course, that's in addition to it's other benefits). No doubt, the edge we'd get from using this "new" offense would gradually wear off over the course of the season and into future seasons. At the same time, we'd also get more efficient at running the no huddle. If I'm Chris Palmer, I'd sprinkle in some of these looks for a few series and see how it goes. Minimal downside. Considerable upside.