Defensive Film Session, Week 3: Sometimes It's Better To Be Lucky Than Good.

Share All sharing options for: Defensive Film Session, Week 3: Sometimes It's Better To Be Lucky Than Good.

My hope is that most of you enjoyed my last foray into defensive excellence, so here's another one. Hopefully it goes just as smoothly. First, allow me to take you through the process of making one of these. To start, I pull up a recap from a random game. It just so happens that this time I selected the narrow win over the Broncos in week three. Going through the play-by-play, I noticed that there was a Jason McCourty interception, perfect, that's exactly the kind of play you look for in writing a defensive breakdown. I was hoping to be able to write a nice, long post on how it was noticeable even from early on in the 2011 season that our young star cornerback was making great strides in his coverage game.

Well, that's not exactly how this one played out, but I think it's worth noting that in this case, the old adage "it's better to be lucky than good", is demonstrated beautifully by this play.

And we're off, here we have our formation. 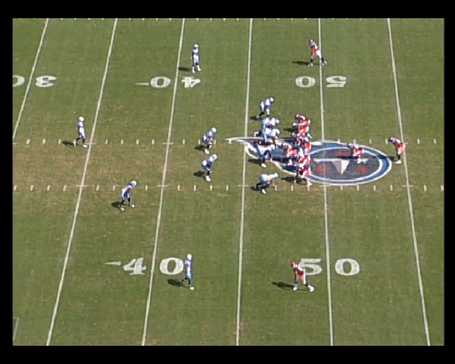 Standard stuff, since it's a little grainy I'll help flesh this out a little. Lined up are the four defensive linemen, Jason Jones, Jurrell Casey, Shaun Smith, and David Ball as per usual, behind them are Will Witherspoon on the right and Barrett Ruud on the left, lined up below Ruud and to the left of Jones is Akeem Ayers who looks like he may be applying pressure from the edge. The two corners are Verner and McCourty, Verner at the bottom of the screen, McCourty at the top, if you hadn't already guessed, the safety who looks to be creeping up is free safety Michael Griffin, strong safety Jordan Babineaux is hanging back. The Broncos are lined up in an extremely vanilla unbalanced I-formation with a fullback, running back, two receivers split out wide on the line, and a tight end on the right side of the line.

Basic v.s. basic. Not a whole lot going on here that you wouldn't see 20 other times every game. 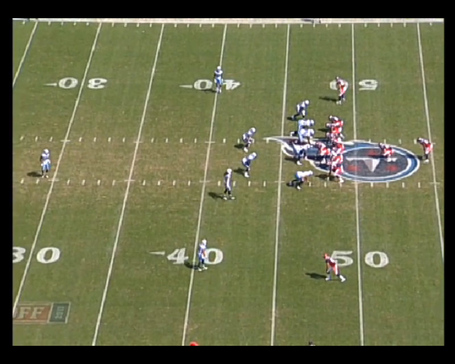 Here's where things get a little more interesting. The Broncos bring in their receiver, Eric Decker if I'm not mistaken, off to the right of their formation inside the numbers, effectively making him a slot receiver. Also changing placement is Michael Griffin, he's gradually creeping up to the line and looks like he might also be applying pressure. The Titans appear that they'll be bringing six pass rushers on this play exposing them to some of the fast-developing pass plays designed to exploit the blitz. Judging by how far off the receivers our corners are, I'd expect them to be playing a zone coverage. If I had to guess, I'd say that the defensive backs will probably play a deep cover-3 while the linebackers drop to hook curl zones. 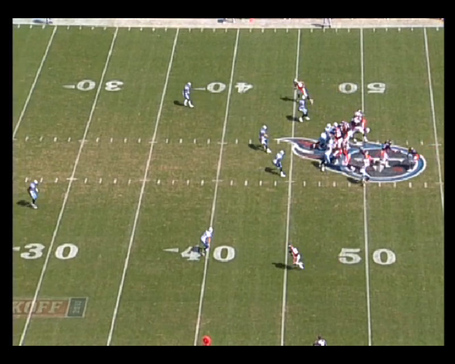 I'm batting .500, McCourty, Verner and Babineaux all drop back to cover deep thirds, Ayers doesn't rush the passer and drops into a hook-curl zone. When you see this in real-time, it starts to make sense. Fake pressure from the left, bring pressure from the right. Even though Orton looks to hand off here, it's pretty clearly going to be a play fake. Read the linemen and the fullback: they're all pass blocking. This is undoubtedly play-action. The Titans made the right call in bringing extra pressure from a defensive back, but will it pay off? 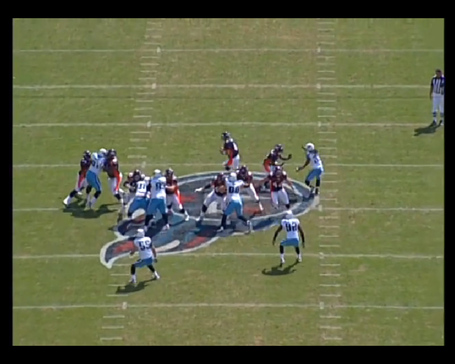 Here's a better view of the chaos. The Broncos simply do a stellar job of protecting Kyle Orton here. The Titans weren't great pass rushers in 2011, but give credit where credit is do, he wasn't getting touched here. Any other quarterback in the league, given all the time and protection that Orton is given here, finds the open receiver downfield for a big gain. However, Kyle Orton isn't any other quarterback, I'm confident that he'll mess it up. Notice Ruud and Witherspoon just kind of standing there barely 5 yards apart. My theory is that one of them was assigned QB spy and since the running back was assigned to stand back and block that neither of them have much ground to cover. Just keep reading the QB's eyes and try to tip a low pass. 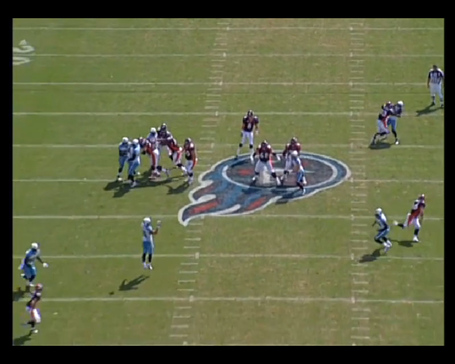 The defensive line was just plain manhandled here. Seriously, note the fact that we have three of our starting defensive linemen standing within about 2 feet of each other. They got cleared the hell out. Like, fair enough Dave Ball, you're dealing with a double team, but wow, Jurrell Casey and Shaun Smith just had some serious will imposed on them by the Broncos' interior line. Notice Michael Griffin getting bumrushed by 40 year old Willis McGahee. A pass rusher he is not. This was a breakdown in effectiveness by our pass rushers up front and is also one of the main reasons that I'm starting to wish we'd paid more attention to getting to the QB in the draft. You can never have enough help getting to the QB. Kamerion Wimbley is a nice addition, I still would've liked to see them target a pass rusher early on for precisely this reason.

Moving on with the play: Orton has all kinds of time and space to deliver this pass wherever he wants to. Barrett Ruud hopelessly does a little hop to see if he can get a hand on it when it's clearly over his head. As we move forward, we'll actually start to see that Ruud being at that exact spot is part of what makes this interception possible. 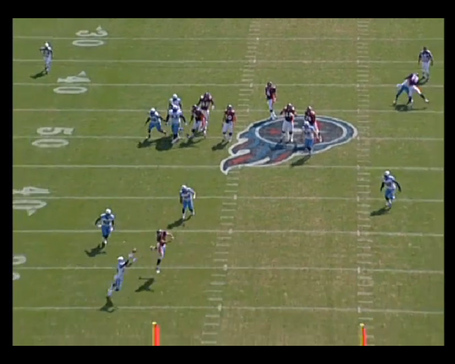 And in this moment, it becomes horrifyingly clear that Kyle Orton has found a way to Orton this situation by viciously over throwing a wide open receiver. There is nobody within five yards of Eric Decker, if he'd caught this and made Jason McCourty miss, this is undoubtedly a touchdown. Instead, it ends up as a 22 yard interception return as Jason McCourty happened to be in the right place at the right time. This overthrow is brought to you in part by Barrett Ruud standing in the middle of the field. Ruud, while not a threat to pick this off at all, is directly in the path that Orton was looking to throw. He knew he had to loft it over the middle linebacker to get it to where it needed to be while putting some zip on it as to not make it a jump ball scenario. To Orton's credit, the rule is usually that if you're going to miss on a throw, miss long. Unfortunately for him, Jason McCourty is both lucky and good and was in perfect position to pick this one off.