Share All sharing options for: Titans X's and O's: The Verticals Concept

In last weeks editions of X's and O's, we took a look at the Smash Concept. Today, we'll look at the Verticals Concept. A philosophy that's synonymous with the Run and Shoot. I think that when most casual viewers think of Verticals the thought that comes to mind is some Hail Mary where the Quarterback heaves it as far as he can, or as Buddy Ryan referred to it (well, really the Run n Shoot in general), Chuck and Duck. We've looked at this concept in the past, but today we'll sink our teeth into it a little more to understand why such a simple concept can be so powerful. 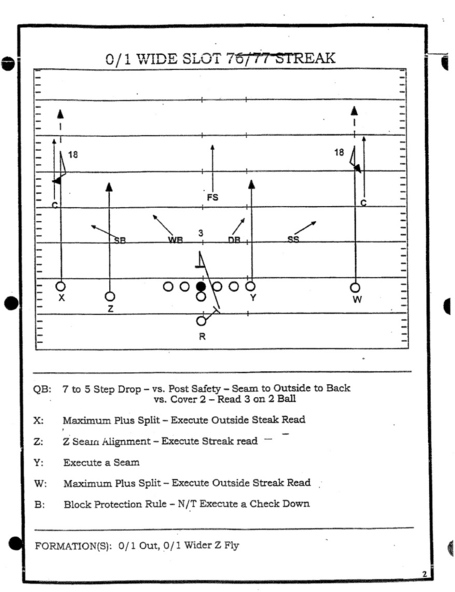 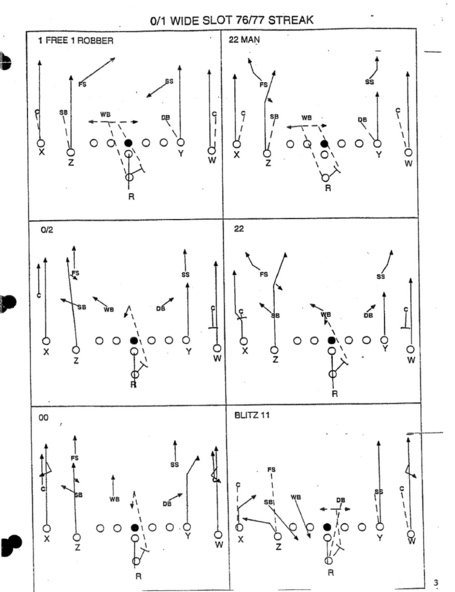 So, the play called in the huddle is 0/1 Wide Slot 76/77 Streak. Let's break that down, as that sounds a lot more complicated than it really is:

Streak - This essentially describes the routes of all receivers in this package. However, it can be changed by adding a tag. In this series, the only tag allowed is "shallow". For example, the play may be described as 0/1 Wide Slot 76/77 Streak X shallow. In this case, all receivers run streaks, except for the X who runs a shallow cross. One other tag is "switch". If tagged on to the end of the play, the weakside receivers will run a switch (a classic technique from the run and shoot days). A switch is essentially when the weakside receivers switch roles and positions post snap. The Z immediately runs towards the sideline post snap. The X towards the middle of the field. Once they cross, they then proceed vertically to run the respective routes (ie. The Z now runs the X pattern and vice versa).

Enough with the playcalling mechanics, and onto the meat and potatoes of this post, the verticals concept. 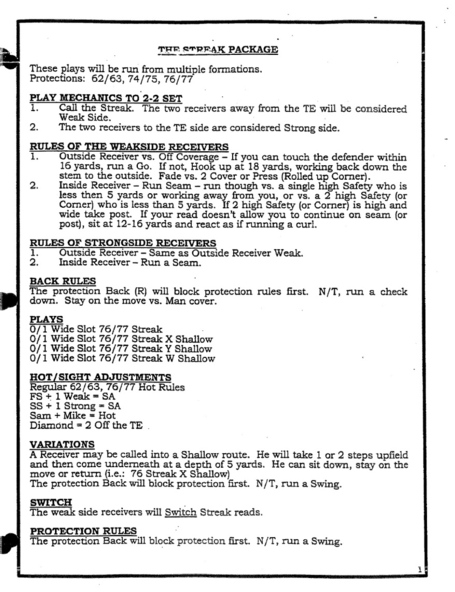 I guess we aren't totally done with the playbook yet. In the above image are the governing rules for the streak package. Some of them I outlined above, but the important one I want to point out here are the Rules of the Weakside Receivers (read: X and Z). Essentially both receivers are always reading coverage, yet the keys are incredibly simple. If the outside receiver (on both sides) can touch the defender, keep getting vertical. If not, run a comeback. Note here that if the receiver is past his defender, he'll keep getting vertical.

As for the inside receiver, he's going to read the seam defender. Against a single high safety, he continues up the seam. Against Cover 2 (2 high safeties), he cuts across the face of the safety closest to him, provided that the safety is wide enough for him to do so. He's also allowed to sit down in the zone if that's what the coverage dictates.

The best part of all this? The receiver isn't forced to identify coverages, just situations. That is, we don't need Kenny Britt to understand if they are in Cover 1/2/3/4. He just needs to react to the defender's technique in front of him. Using these simple keys, a system is created that's amazingly adaptive and really does a great job exploiting all kinds of coverages. And, Palmer's playbook shows that. Image 2 above shows the different mutations of route combinations based on coverages shown. (Side note: The image titled "Blitz 11" looks different from the rest. It's because the defense brings a weakside blitz. When this happens, both weakside receivers convert to hot routes. X runs a slant. Z runs a flat. You'll see below that our current package, may not use the same "hot" assignments.) 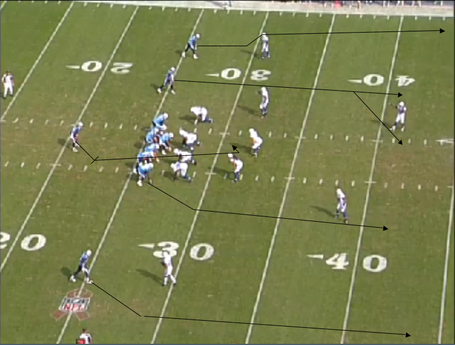 Let's get into it a little further, only this time with pictures from this past season for you visual learners. Titans come out in their "11" personnel (or 0/1 as the playbook calls it) in a 2x2 set. Outside receivers will run streak reads, as will the tight end. The slot receiver will run a seam read. CJ's responsibility is to check protection. If no additional protection is needed, he peels off as a check down. 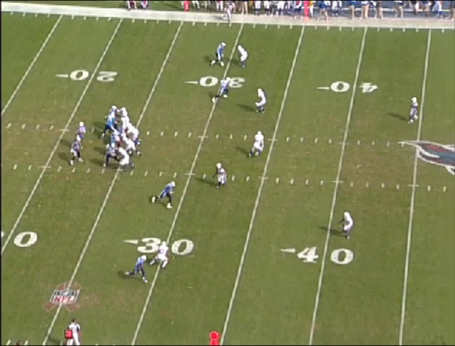 The Outside receivers get width first and then depth. The goal is to stretch the defense not only vertically, but also horizontally. Getting a little extra width puts additional pressure on the safety at the second level. 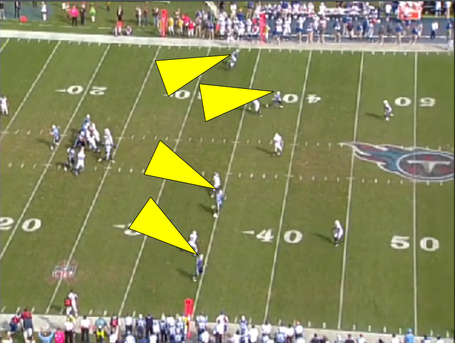 Triangles looks odd, but it was just a quick Powerpoint effort to illustrate the receivers heads turned back to the QB. I can't find this technique in Palmer's old playbook, but it's clearly in the playbook now. You'll notice it every time we run this play. Receivers are taught to immediately look back to the quarterback once they've passed their defender. Most people think verticals and immediately think a huge gain, but a lot of times it will be of the 10-15 yard variety. The reason for this is that a quarterback is taught to cut the ball loose the when a receiver breaks free. Sometimes this happens in the short to intermediate game (ie. a disguised blitz). And, really what that ends up doing is creating a "built in hot". That is, since the receiver is taught to look back to the QB when he passes his defender, this also will apply to a blitz. So, as a defender blitzes, the receiver is ready for the hot throw. This is just a small coaching point, but an important one that further highlights how adaptive this concept can be. 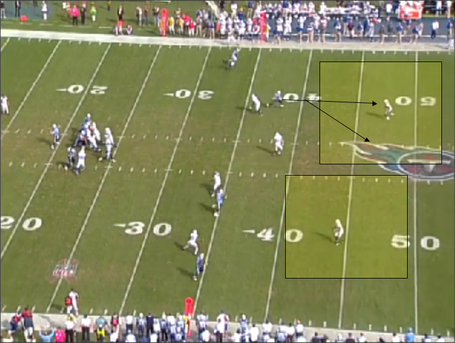 Ok, same picture...different coaching point. The Colts are clearly in Cover 2 here. Nate will continue to get depth and read the safety in front of him. If he's able to (and he is), he will execute a post that places him between both safeties. 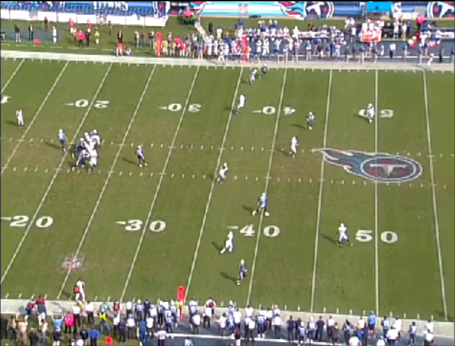 Hasselbeck has already cut the ball loose here, but note that this play actually allowed 2 options. He could have placed it between the safeties to Nate in the middle of the field. Alternatively, he chose to throw the ball to the outside to Williams in the deep void (between corner and safety). Note that it is Nate's streak route that creates this void. By running up the vertical seam, it binds that safety, even if momentarily, which creates a window to the outside. 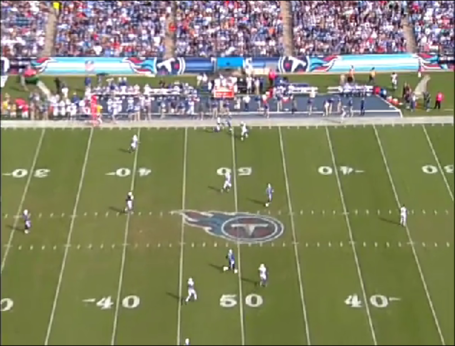 The ball is caught for a big gain.

This concept is all over the NFL. Some version of it is almost certainly in every playbook. However, this is an important piece of the Titans offense, and one that was run often. Hasselbeck is a great quarterback, and I'm so thankful to have him on this roster. Based on Locker's progression thusfar, it won't surprise me if we start Hasselbeck. All that said, it's become clear to me that Locker was drafted specifically because he is tailor made for this offense. He's got the pocket presence and awareness to buy time for these slow developing plays. And when they do develop, he's got the arm and accuracy to execute. Hasselbeck will run a dynamic offense from under center, but Jake Locker (if/when he pans out) can take this passing offense over the top*. Further, the receivers (specifically Nate, Wright, and Kenny) are built to run this offense. If I had to peg it at a number comparing last year to the future, I'd say we were operating at about 60% of our current capacity. This team and front office has made it clear through personnel moves and offensive playcalling that the vertical passing game is a priority. Last year was the best passing year we've had in decades, yet we're just scratching the surface.