I don't plan on doing this series justice, but I'm here to dissect the play that initially made Karl Klug a cult hero here on MCM: his strip of Ricky Williams in the Titans' week two win over the Ravens. As you will see, this is an absolutely herculean effort from our unstoppable man in the middle.

Start here. What this doesn't show is that Jason McCourty is off to the left while Alterraun Verner and Cortland Finnegan cover the two receivers to the right. 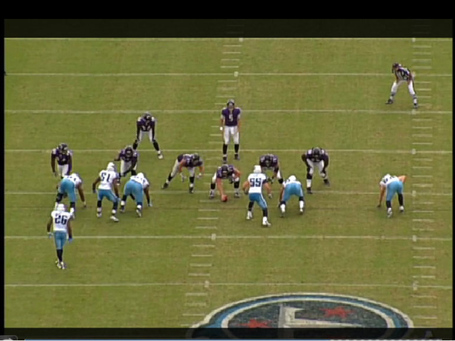 What this says is that the Titans are lined up in their nickel package bringing in an extra defensive back. Michael Griffin is in, he'll be patrolling the center of the field, Jordan Babineaux looks like he's going to take the tight end in man coverage. You've got two inside linebackers, Ruud and McRath, showing blitz. Ruud looks like he's coming through the "a" gap, or the gap between the center and the guard whereas McRath shows pressure from what I believe still constitutes as the "c" gap, or between the tackle and tight end, even though in this case the tight end is lined up with a really large split. In any case, if he blitzes, he'll be going in between Morgan Jones and Casey. A lot of this looks like it's set up to be a pass play and the Titans are going to do their best to defend it with their nickel package and extra pressure from the linebackers. On the defensive line, Dave Ball has created a lot of space between himself and Karl Klug. This looks a lot like the "wide nine" technique used by Jim Washburn to mold Jason Babin into a real weapon coming off of the edge. It's basically an all-out pass rush off the edge and the extra width helps with that by getting as far away from the long arms of Baltimore's monstrous tackle, Bryant McKinnie. This leaves Klug to deal with the guard, Ben Grubbs, now of the Saints. Remember, this is what we can only guess will happen at this point based on the formations. Tennessee in its' nickel package, linebackers showing blitz, and defensive line poised for all out rush, Baltimore lined up in shotgun with one back, a tight end off the line of scrimmage, linemen all poised to pass block, and three wideouts. 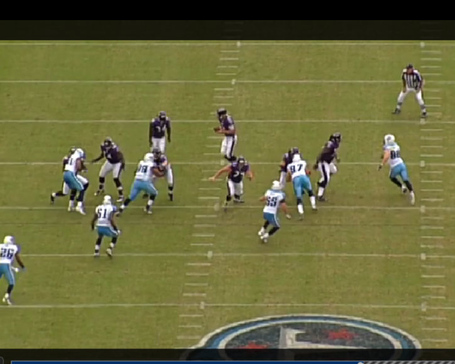 OH SNAP LOOK HOW WRONG WE WERE. Classic draw play, set 'em up with a passing formation and hand it to the old guy for an easy run up the middle, time to expose Barrett Ruud for the chump that he is against the run by slamming our center right into him as he backs up seven yards down the field. Note that neither of the linebackers we thought were blitzing actually blitzed. McRath and Ruud both take hook-curl zones in the middle of the field. Now, Babineuax is likely in zone coverage as well, but he may have initially been assigned man-to-man on what I believe is Ed Dixon, but Dixon is helping Michael Oher with Derrick Morgan Jason Jones, so he's just dropping into coverage. Ball is looking for the edge around Mt. McKinnie as Klug and Casey engage Grubbs and Yanda one-on-one. This is a no-doubt draw play. Knowing what we know about how bad the Titans were in stopping runs up the middle when Ruud was starting, this doesn't look like it's going to end well. In a perfect world for the Ravens, Ricky Williams is going to run straight up the middle through the monstrous hole opened up by the two guards who should be dominating a couple of rookies at the point of attack and past the MLB, Barrett Ruud, into the secondary. The x-factor here should be Gerald McRath who looks like he will be in position to make a play if Williams gets past the line. 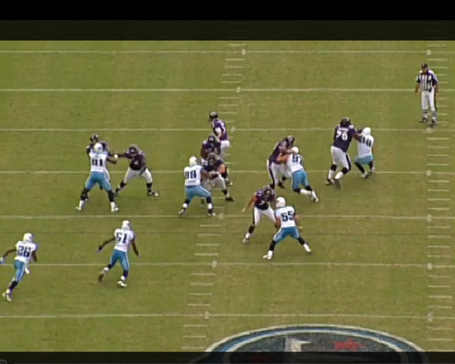 HAHA, SURPRISE AGAIN. While the defensive ends are getting manhandled, Morgan Jones is dealing with a double team so he gets somewhat of a pass, we have Jurrell Casey who has successfully plugged up a huge hole in the defense simply by being there and being massive. What you see to the right is fifth-round draft pick Karl Klug picking up an All-Pro guard and simply moving him by being the low man. Just goes to show what proper technique will get you. Protip: don't stand up when trying to block somebody. This is truly a fantastic job by both tackles. Casey hasn't gotten much penetration, but he's in the way which sets up a key cutback by Ricky Williams who's now frantically searching for daylight.

Things seem to have shifted to our favor in a matter of milliseconds. 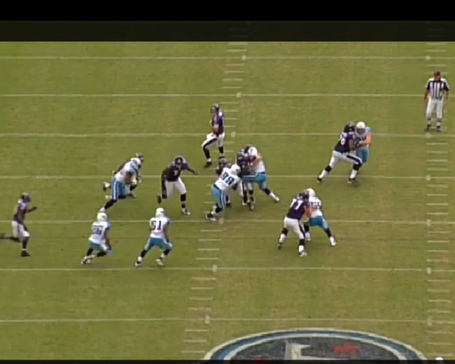 This is your end result. This is Karl Klug driving his man back and separating from him in time to latch onto the ball that is tucked up under Ricky's right arm. He hits it with enough force to knock it loose and before you know it, the Titans have the football. The nickel defense has prevailed against a draw play which kind of goes against all logic, but that's the beauty of having two guys who just get the job done stuck in the middle like that. It's plays like these that make you realize that Klug and Casey are two guys that you can hopefully build a defense around in the future. All in all, it's a really simple play to break down. Basically just two rookie defensive tackles doing their jobs perfectly and then some, it leads to a Ravens turnover at a time where the Titans had lost a lot of momentum.

This is my first attempt at a film breakdown, so let me know how I did and if you'd like to see some more defensive film studies in the future. I had a lot of fun with this, so if it would be something you guys would enjoy then please let me know.