Share All sharing options for: Titans X's and O's: The Smash Concept

This post will potentially begin a series that breaks down passing concepts within the Titans playbook. I suspect these will mostly focus on plays run with Locker in the game, as that is fresh on my mind, but we may look into some with Hasselbeck as well. Today we'll look at the Smash-7 combination. It's a common passing concept, yet one that can be exceptionally effective. The play was run during the Falcons game on the first series that Locker came in the game. The result was a touchdown. 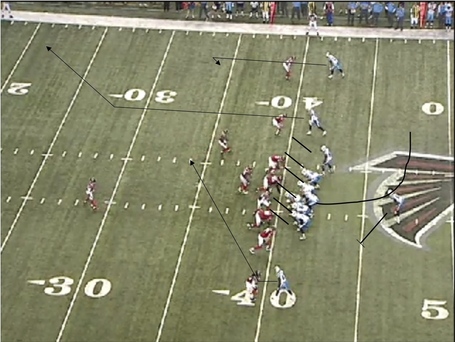 The Titans are working out of "11" personnel (1 RB, 1 TE). Interestingly, Hawkins is lined up at Split End to the left. Cook is off set at TE to the right. Nate is in the slot. Williams is split out at Flanker. The coaching staff elects to roll the pocket on this play. They'll roll Locker out to the right, but the pocket will roll with him. Note that a designed roll out is not necessary to run the Smash concept.

The Smash concept describes the route combination at the top of the screen. The Flanker is going to a "smash" route, otherwise known as a 6 yard hitch. The inside receiver runs a flag pattern. He'll run 12 yards up the field and then break for the corner. This is called a flag or 7 route (which is why you'll also see this called a smash-7 combo). Traditionally, this route combination is meant to be a Cover 2 beater.

In a basic Cover 2 zone defense, you'll have 2 safeties over the top, and a corner to the outside. Just examining one side of the field (note the above scheme is not a Cover 2 look, so don't use this for a reference), the corner's responsibility is to cover the underneath routes (flat routes, speed outs, hitches, etc). The safety's responsibility is to work the deep outside. Essentially, this route combination binds the corner. Sink to the flag and the QB throws underneath. Sit on the hitch, and the quarterback places it over the corner and underneath the safety (this area is sometimes referred to as a deep void).

Back to our example. This play can also be a man beater, which we will see in the frames below. The Falcons show blitz on this play and bring 6 or 7 (it's hard to tell with the pocket rolled and with Cook in as an extra blocker). Essentially, this leaves 7 man protection (O-line +Cook and CJ) versus 6 or 7 blitzers. That gives us 3 WR's running patterns; Williams and Washington running the Smash-7, and Hawkins running a quick slant. They are working against man coverage with a Cover-1 safety over the top. 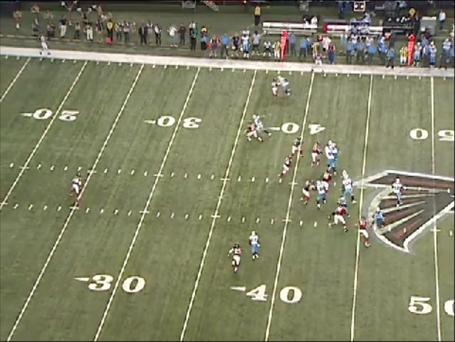 The ball is snapped, pocket rolls, and Locker rolls out. Receivers to the closed (or strong) side of the field are working to get depth on their routes. At this point, it's pretty clear that the Falcons are in man. Two other things to note. The Safety is out of position to the strong side of the field. And, Nate has done a great job of getting outside leverage, which will allow him a clean break once he reaches the 12 yard mark. 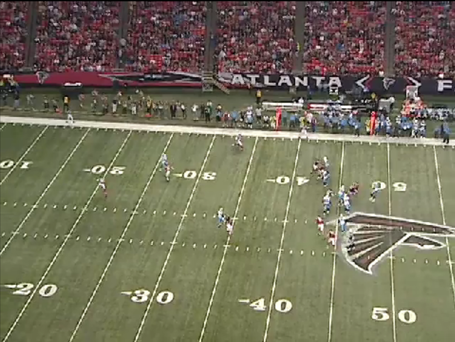 Look at what has happened here. By bringing Hawkins on the quick slant, the Titans have created a triangle read (note how the three Titans receivers create a triangle formation). In this play, that doesn't show relevance. However, against zone looks this can put defenders in a bind and really allows this combination to have effectiveness against man, Cover 2, and Cover 3 looks. Shifting focus back to our play, Locker cuts it loose just as Washington gets out of his break. As you can see, Washington has great positioning here and his defender is beat. 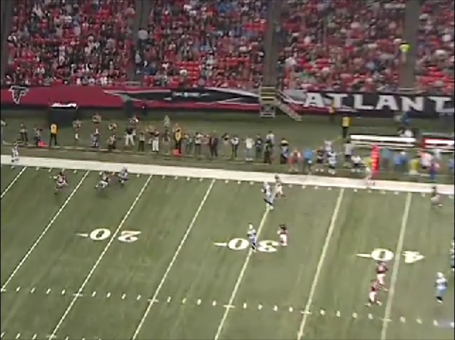 Locker throws a catchable ball here. Not perfect depth, but it actually ends up working for the best as Washington cuts back to the middle of the field. Further, Locker got the ball out on time here. Something that's especially important at the pro level.