With the 39th pick of the 2012 Music City Miracles Mock Draft, the St Louis Rams (represented by the Saint) select: 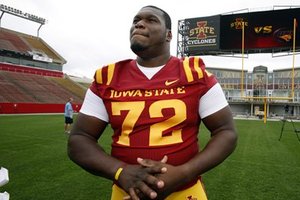 Not the flashiest pick, considering I just took an Offensive Tackle with my previous pick, but picking up Osemele pretty much locks down the O-line for years to come.
The Rams just locked down Harvey Dahl to a long term deal, solidifying the right side of the line.
On the left side, Jacob Bell has failed to live up to expectations since leaving the Titans. All indications would point to the Rams looking to upgrade at left guard. The Rams are pleased with Dahl, but unimpressed with Bell or any other options at left guard on the roster. Bell will be a free agent in 2012. It's uncertain where he will line up next year, but it is certain that it won't be in St. Louis.

Enter Kelechi Osemele. A powerfully built, naturally girthy offensive lineman who plays left tackle for the Cyclones, but his body type might be better suited to play as a guard. Possesses natural athleticism for his size and he does have the ability to bend and sit into his stance.Displays a powerful set of hands, long arms and can stick through contact.Moves well and looks coordinated on the move for his size, can drop his pad level and chop down defenders at the second level with the initial quickness to get out of his stance and reach blocks.


Protecting your 50 zillion dollar QB should be a huge priority in this draft and I believe this will help lock down the O-line for years to come.

Now on the clock: Ice and the Carolina Panthers