With the 37th pick of the 2012 Music City Miracles Mock Draft, the Cleveland Browns (represented by ronburgundy7427) select: 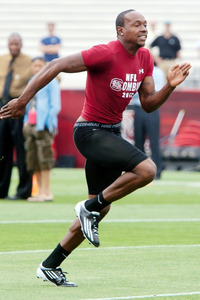 Well we now know that the trade Prattrick and I made will never happen. But this pick works ieven with McCoy coming back at QB. They have no weapons around him and Jeffery at this point has to be considered a steal. He may not be a burner, but he can be that big, physical WR that may actually do better in a system like this where he can take shorter passes and go for YAC than be asked to run deep routes.
(And in pretend world, RGIII would need a weapon at WR anyways, I win no matter what!!!!!11)

Now on the clock: Dynamic Dreadlocks and the Jacksonville Bedazzlers