With the 61st pick of the 2012 Music City Miracles Mock Draft, the Baltimore Ratbirds (represented by StPrattrick) select: 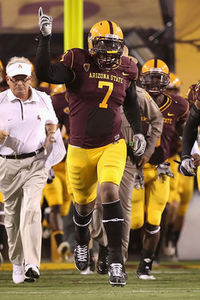 In a shocking move the Ratbirds nearly miss the clock, again, but quickly recover to grab the worst player in the draft SIR Vontaze "Can't get right" Burfict! Ray "The Murderer, but no seriously" Lewis is not getting any younger and they need to meet quota for potential-convicted felons on the team, so they snag the biggest bum of the draft!
There is so much to say about Vontaze Burfict, professional... is not one of those things though. A 3 year head ache for ASU, he was so talented they were forced to start him, but his own brain kept getting in his way. He had the classic problem of "When Keeping It Real Goes Wrong." Aside from having a lack of concentration on plays, giving up detrimental penalties, starting fights in practice with teammates, starting fights with coaching staff, bombing nearly every combine test, AND as of recent failing his drug test... he's a really great teammate#sarcasm.
Vontaze does have some redeeming qualities that could make a team feel like they struck gold with this deep second round pick:
Lots of power, lots of fire in his game, much faster then his 40 time would suggest... but that is about it.
With learning how to play Linebacker from Ray "Knife" Lewis and the second douchiest human in the NFL (behind Jason Babin) Terrel Suggs, he will fit right at home with the Ratbirds.

Now on the clock: J3G77 and the San Francisco 49ers