With the 57th pick of the 2012 Music City Miracles Mock Draft, the Denver Broncos (represented by JustinS) select: 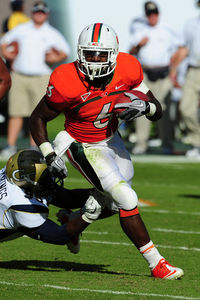 Knoshon Moreno has been held by injuries in his first few seasons and it's not likely the Broncos will ever get what they hoped to out of him. Miller is a young explosive playmaker. Miller was Miami's first running back since, ironically, Willis McGahee to break the 1,000 barrier. The Broncos are in dire need of a running back. McGahee did well this last season but got beat up and is getting a little long in the tooth. Moreno can barely stay on the field. The Broncos hope they've chosen right as they take Miller with the 57th pick of the 2012 NFL Draft.

Now on the clock: XAGMNINETY and the Houston Texans