I should first start this post with that I completely agree with the front office's decision to not offer Cortland Finnegan $10 million a year, for an above average but not a shut down corner. With that said, I do think we will miss his toughness and awareness on the field going forward. I think Stephon Gilmore would be the perfect selection with the 20th pick, but I cannot help drool imagining this offense with the addition of Stephen Hill.

I was always a fan of his feistiness and the leadership he brought to the defense. I just hope McCourty and/or ATV can step into that new veteran leadership role, while grooming a rookie to make excellent contributions from day 1.

This film study session will look at one play from the Ravens game conveying one particular area I feel we will miss Finny's play. Follow me through the jump for pictures and analysis. 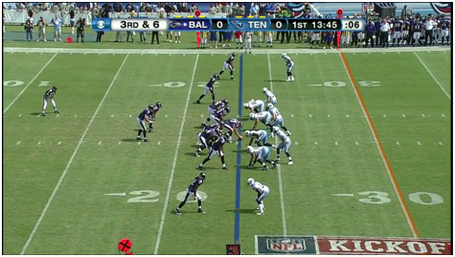 Like the previous film study, the Titans start with McCourty and ATV on the outside and Finny in the slot. His assignment on this particular play is Anquan Boldin who is running a simple short post route across the field. Both Babineaux and Griffin are out of the picture preventing the big play. Barrett Ruud's assignment is to cover Ray Rice, but if he chooses to stay back and block, Ruud has the green light to rush the quarterback. Akeem Ayers is covering Ed Dickson. 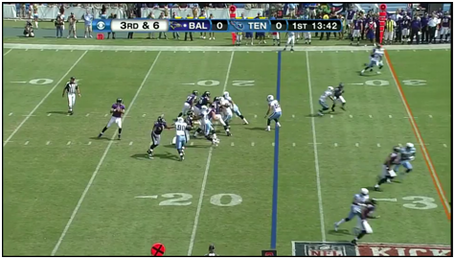 The ball has been snapped and the defense does a nice job blanketing all receivers. On this play, Ray Rice runs a simple out route from the backfield and Barrett Ruud does a nice job of picking him up. Anquan Boldin begins crossing the field, but Finny is on him like white on rice. 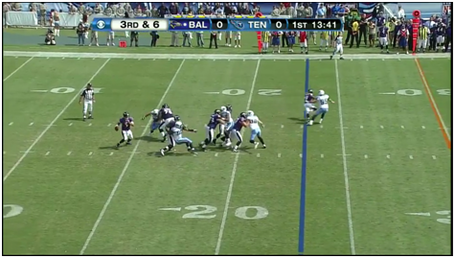 The pass protection begins to break down and Joe Flacco is flushed out of the pocket. At this point, his only real options are to see what he can get with his legs or hope something opens up. Typically in a case like this, the quarterback will look to his checkdown to dump it, but Ruud did a nice job of not allowing Ray Rice to create any space. 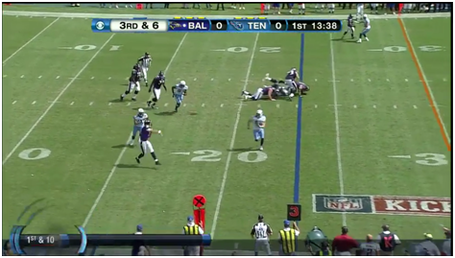 Anquan Boldin was open very briefly, so Flacco got rid of the ball. However... 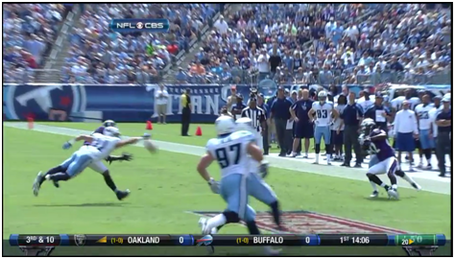 Cortland Finnegan does any excellent job of getting to the ball and batting it down.

I know it may seem like just a simple play that most cornerbacks are capable of, but Finny was usually quite good at these plays and in the right place at the right time.

Thanks for reading everyone, hope you enjoyed it. Feel free to comment on anything I said, or suggestions for the next one.