I've begun charting all of Locker's throws from 2011. The intent was just to get a grip on all the data to see if we could find anything interesting. As of now, I'm through CLE, HOU, and ATL. Watching the Atlanta throws, a handful of rookie mistakes showed up. Nothing totally glaring. This play, though, did make me cringe a little.

First, just a quick lesson on a Hot read/route. No doubt this is a term all of you have heard before. It essentially describes an emergency route. If a blitz is coming, a QB can sometimes signal to a receiver to run the hot route instead of his original route. Other times, no signal is needed, as is the case in the play below. Cook getting a vertical stem on his route anyways (could be a dig, out, or seam route). If a blitz comes, the "hot" throw is just getting him the ball a few yards from the LOS. The receiver needs to know that he is the "hot" receiver in the event of a blitz and to look for the ball. Other times in these scenarios, the WR will run an entirely different route (most often a slant or quick hitch) that allows the QB to get the ball out quickly. There are a number of different ways to handle this. Bottom line, a hot route is a way of punishing a defense for bringing extra defenders by getting the ball out quickly to the (typically) uncovered receiver. 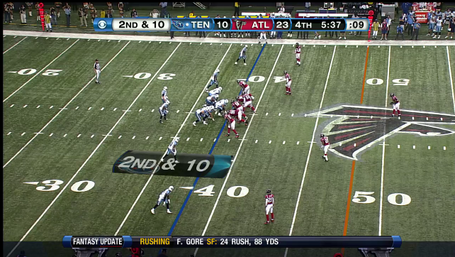 "11" personnel in a 2x2 arrangement. We'll show two pre snap shots here to illustrate the point. Check out the defensive back that's covering up Cook in this shot (slot on the top half of screen) 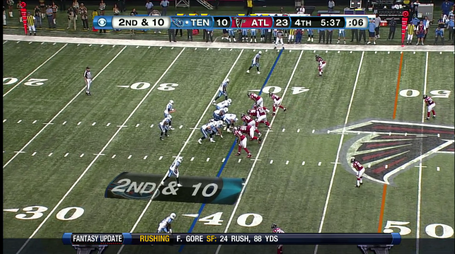 Now look at the defender. He's showing blitz. This signals to the QB that a blitz is a possibility. If the blitz comes, the QB needs to understand who's hot and get it out quick, provided he's open. In this case, Cook is the hot receiver. 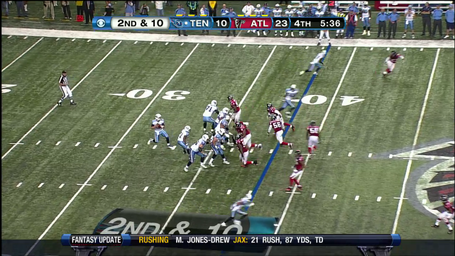 Locker recognizes the blitz and he's looking to Cook the whole way. If just gets it out right now (before he completes his drop), it's likely a completion. The Falcons have brought the blitz, but they are also rolling the LB in coverage in that direction. Lofton has backed off the LOS (he was showing blitz too), and is now headed towards Cook. 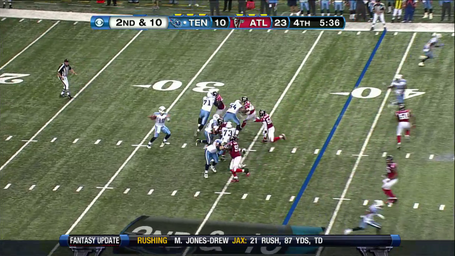 The window is now closed. Locker should never have cut this ball loose. The pre snap read dictated this throw, but he's got to do better at reacting post snap in this situations and understanding the possibility of a zone blitz. The pocket is clean here. Certainly there are better options in his progression, even if it's a throw away at this point. 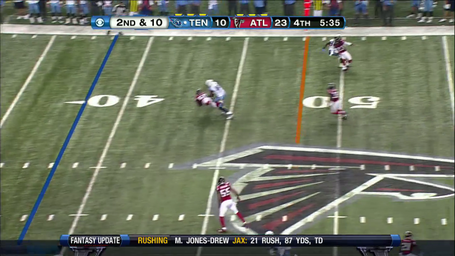 The throw is nearly picked off by Lofton. Rookie mistake here, and one he hopefully learned from.

I suppose it's not all bad news. The positive is that he identified the blitz and looked to outlet to his hot receiver. He just needs to do a better job of getting the ball out quicker, and, if he can't, then he needs to get onto his next progression when he feels that linebacker rolling into coverage.

As more highlights (and lowlights) show up as I chart these throws, I may put up some more posts...