With the 55th pick of the 2012 Music City Miracles Mock Draft, the Atlanta Falcons (represented by ltknick) select: 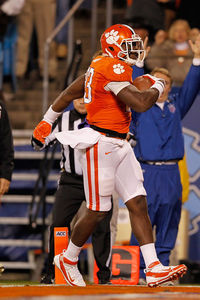 This one is a simple as the Falcons need to find a successor to Tony Gonazalez. Allen is extremely athletic and gives the Falcons versatility and two dangerous weapons from the TE spot. All-pro tight end Tony Gonzalez is entering his 16th season in the NFL, and still has gas left in the tank. However, that gas tank will hit empty soon.

If the Falcons want to continue to give quarterback Matt Ryan a big target to hit in the middle of the field, they'll need to start looking for a replacement for Gonzalez. There are three top-notch tight ends in this draft class that have a similar ball-catching skill set to Gonzalez.

If Coby Fleener (Stanford), Orson Charles (Georgia) or Dwayne Allen (Clemson) are available at pick No. 55, Atlanta might look to select its tight end of the future. Any of the three tight ends mentioned here could flourish in Atlanta's system, and learning from Gonzalez would be an incredible experience for a young tight end

Allen was a force for Clemson at tight end ever since joining the Tigers in 2009. He was just a junior in 2011, but he has the tools to excel at the next level and as a result he is leaving early. Allen played in all 14 games as a freshman, making 10 receptions for 108 yards and three touchdowns. In 2010 he hauled in 33 passes for 373 yards and one score, garnering All-ACC Second Team honors. Allen was once again an outstanding red-zone target as a junior. In 14 games the Fayetteville, NC native had 50 receptions for 598 yards and an impressive eight touchdowns.
As one might guess just from looking at his starts, Allen is a big target for quarterbacks standing at 6'4'' and 255 pounds. He has decent speed, having been clocked at 4.67 in the 40-yard dash (but that is not how is going to make his money on Sundays). Allen simply runs solid routes and has great hands. He is a sound blocker and has a significant impact in the running game. He will have to improve his speed if he is going to be a reliable pass-catcher at the next level and become a stat machine. Regardless, he can be a major contributor in the red zone and a big help to any offensive line. Allen should be a second-round selection in the 2012 draft

Now on the clock: King Titan and the Pittsburgh Steelers