With the 35th pick of the 2012 Music City Miracles Mock Draft, the Minnesota Vikings (represented by infinitystealth) select: 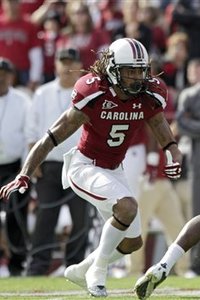 This was a tough pick, as it was a tough choice between drafting a WR (Alshon Jeffery or Mohammed Sanu) or a CB (Gilmore or Janoris Jenkins). In the end, I went with Gilmore as I believe that he is the most talented player available on the board that addresses the biggest need for the Vikes on the defensive end. Their secondary is absolutely terrible and they need an upgrade in all 4 starting spots (2CBs, SS and FS).
The Vikes were one of the worst in defending against the pass last year, giving up the 7th most passing yards last year. Along with that, the Vikes gave up a terrible 28.1 points per game, ranking 31st in the league. As we all know, the NFL is moving towards a passing league now, and teams must have at least 3 viable CBs to play in their secondary; however, at this point, the Vikes look like they have none.
Here is where Gilmore comes in. He is an absolute stud and IMO he is the 2nd best CB in this draft after Claiborne. He has the size and skillset to battle against the very best WRs in the league. With that size, he has elite speed (4.4 40 yard dash) and always seems to be around the ball a lot. Many considered Gilmore as the best playmaker on the Gamecocks defense last year, which is an impressive feat as their D had astounding pass rushers in Ingram and Clowney. If used properly and in the correct scheme, Gilmore can become one of the best at his position in a few years, as long as he is able to work on his technique and not rely on his athleticism too much.

Now on the clock: Big Tuna and the Tampa Bay Buccaneers