With the 34th pick of the 2012 Music City Miracles Mock Draft, the Indianapolis Colts (represented by Bryan J. Boltik) select: 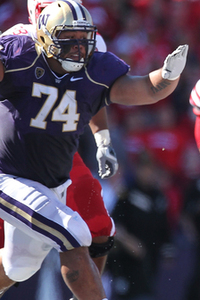 A lot of people might see this as a reach, but hear me out. The Indianapolis Colts are going to be switching to a 3-4 defense and have only one defensive tackle in former Titans 5th round draft pick, Antonio Johnson. Their first round pick was to get the corner-stone of their offense, now they need a corner-stone for their defense. A nose tackle is a huge need and Alameda Ta'amu certainly fits the bill at 6'3", 348 pounds.

Ta'amu didn't have a spectacular senior season with the Huskies, totaling 30 tackles, 7 for a loss, and 3.5 sacks. And if anyone watched their bowl game against Baylor, you can see what I'm talking about. But Ta'amu improved his stock a little bit at the Senior Bowl, and put up respectable numbers at the Combine and the player that was once projected as a 1st round pick, won't be far off if/when the Colts take him in the second round.

Now on the clock: infinitystealth and the Minnesota Vikings