Anyone who's spent time around MCM over the past month is aware of my interest in acquiring Stephen Hill in this year's draft. I have no problem admitting that interest was piqued immediately after he dominated the 40 yard dash among all WRs at this year's combine. Up to that point, my opinion likely resembled that of most fans, and even NFL coaches: This was a kid with raw talent, that was probably more athletic than most of his peers, but not a total athletic outlier. He led the nation in YPR, yet that was probably a result of the system he was in (which is still partially true). Given his size, I expected he'd run mid-4.5s. Still plenty athletic, but not exactly enough oomph to take the top off the defense.

The first knee jerk reaction to all this is, "You just like him because he runs fast." Yet, it's not nearly that simple. Every year there's a guy who runs fast. Fast ≠ success, necessarily. That's not groundbreaking news. What raises an eyebrow is the size and speed. The combine information I'm working off of goes back only to 1999. Since 1999, there have only been three WR's 6'4" or taller that have run a sub-4.4 40: Stephen Hill, Calvin Johnson, and Tyrone Calico. For the purpose of this article, I'll also include Randy Moss who allegedly ran sub-4.3 while at Florida State (before transferring to Marshall). Watching his rookie tape confirms that he was likely in the sub-4.4 range. Let's also note that all these guys have 38+ inch verticals, an indicator not only that they can go up and get the ball, but also of explosiveness.

So, among others with that size and speed, 2 of the 3 are future Hall of Famers. The other, former Titan Tyrone Calico, is more or less an unknown. He showed flashes his rookie year, but had his career cut short from a severe knee injury. Even if we consider him a dud, 66% still shows that Hill is in good company. This isn't to infer that his size and speed means certain success. I just want to illustrate what this size and speed can mean in the NFL.

Once we get past that objection, the inevitable next one is, "He has limited production." Again, yes, that's true. You must take it in context, though. Georgia Tech's option offense threw the ball only 11 times per game. Despite this, Hill still managed 820 yards receiving and 5 TDs. He also led the nation in yards per reception.

It's not all a rosy picture, though. Much of those stats are frontloaded in the beginning of the season. It will be important for NFL teams to understand why production tapered off in the middle of the season. A question I've been unable to answer with the limited amount of tape available. Further, there's been some talk that he has issues with drops, another claim I've been unable to substantiate enough to consider it a problem at the next level.

In those problems, however, lies value. Had this kid produced in a traditional college offense at a high level, he'd be the first WR off the board. Instead, he ran in an extremely run heavy offense that could possibly be the culprit, or at least a contributor, to all these problems. Substandard QB play. Limited targets. Small sample size per game. All these things together can lead to erratic numbers from game to game, and possibly some dropped balls from a lack of rhythm in the passing game. Beyond all these things that highlight the offense's impact on Hill's draft stock, his role within the GT offense does lead us to one other final objection.

"All this guy does is run 9 (vertical) routes."

I'm paraphrasing, but that's the main talking point from virtually every talking head when Stephen Hill comes up. To an extent, it's true. The lion's share of his targets are quick screens, deep posts, and vertical routes. Of course, when you're running an offense where almost every pass play is a surprise to the defense, these simple concepts are all that's really needed. Some of the negativity surrounding this was put to bed with his Pro Day and the Combine where reports indicated he looked solid running the traditional NFL routes. It's pretty clear that he's been working on polishing that aspect of his game. Still, even if at this point he's only able to excel at deep routes: Who cares?

A team doesn't draft Stephen Hill to come in and be a technician in the short-intermediate game. Hill gets drafted almost exclusively for his ability to stretch a team vertically and go up and get the ball when it gets there. It's the same logic that lead the Vikings to draft Randy Moss. 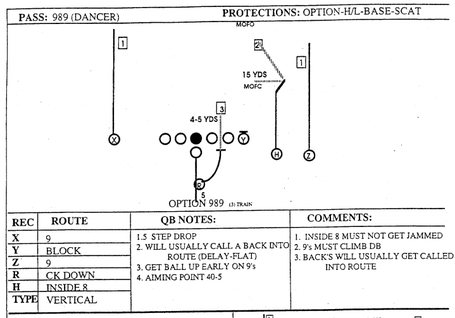 The play above from the 1998 Vikings Playbook is referred to as 989 (Dancer). 989 describes the routes run by the receiver from left to right, vertical (9), post (8), 9 (vertical). Actually, the post is a site read for the slot receiver based on MOFC/MOFO. This is nothing new to the NFL, or MCM readers. It's the same concept we discussed in the last post about the Titans vertical game. Hell, you can pretty much be guaranteed that some version of this play is in every NFL playbook since the mid 90's*. Yet, when the Vikings made this their bread and butter in 1998, it set the league on fire. The play was powerful enough to not only manipulate the world into thinking that Brian Billick was a genius, but also lead 35 year old Randall Cunningham to his only All Pro selection of his career. It was like magic. Seemingly overnight, the Vikings went from a middle of the road offense with a 9-7 record, to the #1 offense in the NFL with a 15-1 record. I'll save you the suspense about what changed...Randy Moss.

Moss' combination of size and speed was unlike anything the NFL had ever seen. It wasn't the vertical concept the NFL had to react to. That had been around for years. It was Moss' skill set that took NFL defenses by storm. Not only could he punish a defense deep. He could beat every defender in the NFL in a jump ball situation. A Moss-like skill set is available in this draft. A skill set, mind you, that only comes around every 4 years or so. That distinction is what makes Stephen Hill different than any other receiver in this draft.

So often, fans want to line up all prospects side by side, give individual general grades, and draft accordingly with total disregard to the system in which the prospect would operate. Yet, that's such a critical component. How does the prospect fit into the offense that's being run? For this reason, I cringe when comparisons are made between, say, Alshon Jeffery and Stephen Hill. Really, this applies to most prospects, Jeffery just happens to be the most talked about lately. Yes, they both play wide receiver. Yet, the value add that both would provide and the things both would be asked to do are very different. Specifically, there isn't another prospect in this draft that has the potential to produce the deep threat that Stephen Hill's skill set provides.

Adding a prospect like Hill could take this offense over the top. The combination of Britt at Z, Hill at X (provided he shows consistency in beating press, otherwise we can keep Britt at Split End), and Nate in the slot sounds absolutely menacing. Throw in Cook, CJ and our young QB who's strong suit is the deep ball, and there's a recipe for something special.

The Titans were at Tech's Pro Day, so there is a preliminary look. I'll be surprised if this kid doesn't get investigated further with a formal visit. Palmer has shown an interest in attacking defenses deep. I suspect he'll want more information on the most physically gifted receiver in this draft given that the tape tells us very little.

One last thing that often gets over looked in this process: character. Hill, by all accounts, is a great kid. He comes from a good family, and has no character flags or off field problems. That isn't a huge deal, but given our history with Kenny Britt, Pacman, Vince, etc., a first round pick that we don't have to worry about off the field would be refreshing. Further, in every interview I've seen he continues to mention that he's working hard and that he has a lot of work ahead of him. It would appear that he embraces the challenge of becoming a complete NFL receiver.

The draft is all about value, and that's what Stephen Hill potentially provides. He could be a superstar that falls into our lap at 20 almost solely because he's been hidden in an offense that doesn't highlight his talents. I hope the Titans realize this, review his tape with a fine tooth comb, and bring him in for a comprehensive individual workout. Based on what I've seen, I think they'll find a WR that will fit nicely into the Titan's system with a skill set that could help take this offense to another level.