With the 54th pick of the 2012 Music City Miracles Mock Draft, the Detroit Lions (represented by MCM Hall Of Famer theologic) select: 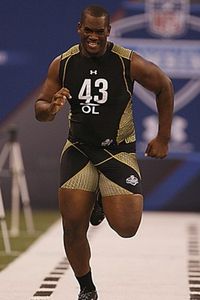 Jeff Backus is 34 and the one year deal he just signed reflects the Lions' desire to find a replacement for the aging lineman. The Lions don't generally draft based on need. However, I don't see any players left at 54 that represent enough value to make them draft BPA here. I was tempted to go with Casey Hayward, but I think both he and Sanders are a bit of a reach and Sanders was the better pick for Detroit here. One of the biggest knocks on him is that he needs to get stronger. Playing behind Backus for a year will give him time to add more weight to what has been judged as a good frame. Additionally, Sanders has the flexibility to play both OT positions, which would give Detroit good depth and options since starting ROT Cherilus is only average.

Now on the clock: ltknick and the Atlanta Falcons