With the 53rd pick of the 2012 Music City Miracles Mock Draft, the Cincinnati Bengals (represented by SoCalTitan) select: 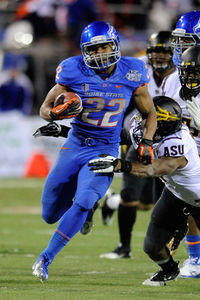 The Bengals decided to part ways with Cedric Benson this off-season who remains a free agent. Benson has been a great back for the Bengals posting 1,000+ yard season the last 3 years but at the ripe age of 29 the Bengals chose to go another direction and signed former Patriot, the law firm BenJarvus Green-Ellis. BGE has never really been a #1 back but more of the RB by committee ran in NE so I expect the Bengals to look for someone to share the back field with BGE and will find the perfect compliment in the bowling bowl Doug Martin. At 5'9" and around 223 he reminds me of a bigger version of MJD. Lately his name has been rumored to be shooting up some teams draft boards and may even be a late 1st round pick if you believe them.

Martin has amassed 3,431 rushing yards with the majority of it coming in his junior and senior seasons (1,950Yrds/18TDs & 1,299Yrds/12TDs respectively) plus another 715 yards in receiving so we know he can catch out of the back field. Martin excels at running between the tackles, with great burst and vision to find the holes. Because of his stature he naturally has a lower center of gravity then your typical back making him extremely tough to tackle, if you can find him. Not only is he a more bigger back but he also has great straight line speed running a 4.55 40 at the combine. More positives for Martin is that he has great work ethic and keeps his body is phenomenal shape. If your looking for negatives, it would be that Martin carries the ball to high which makes him prone to fumbles and while he is good at everything he doesn't exactly explode and any one thing. I find Martin a great fit for the Bengals and a steal this late in Round 2.

Now on the clock: MCM Hall Of Famer theologic and the Detroit Lions