With the 52nd pick of the 2012 Music City Miracles Mock Draft, the home team (represented by deaconbrodie) select: 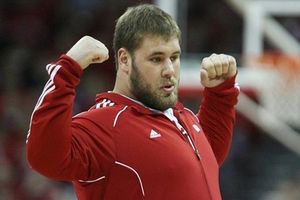 With the 52nd pick in the second round, the Tennessee Titans select Kevin Zeitler, OG from Wisconsin. He stands at 6’4", weighs in at 314 pounds and put up 32 reps (nearly doubling Badger teammate Konz by the way.) Last year the Titans had a huge need at QB. They acquired one in free agency and selected one in the draft. This year the Titans two biggest needs are DL and OL. They will continue the trend of doubling up with this pick. They signed an aging veteran in Hutchinson and they also continue the OL upgrade by picking up Zeitler. At pick 52 he was both BPA and fit a major need. Kevin Zeitler is rated the 40th best prospect in the draft by a consensus big board consisting of CBS, Scouts Inc, and Kiper among others. A good amount of mocks have Zeitler going in the first round and pretty much all have him gone by pick 52. Mayock actually has Zeitler rated as the second best guard, even above Cordy Glenn. If he fell to the Titans in the second I am sure our front office would be pleased. There were two weaknesses about Zeitler pointed out in most scouting reports. He is not a pure athlete, and he is not fast off the snap in pass protection.

He would also bring that Bad A attitude back to the line. I found the following information on scout.com. Badgers fans learned to appreciate the man that his teammates dubbed as "The Terminator". 2010 All-American left guard, John Moffitt joked that the goal of the offensive linemen was to transform Zeitler from machine into a man. His legend grew with each game that he suited up for Wisconsin and the coaches knew that while their right guard is a man of few words, no one on the team displays his passion and tenacity for his work on the football field, in the weight room and in the classroom. "He is a great worker," Moffitt said of Zeitler, "He is relentless. He is focused. He is a serious guy. He wants to hit people and he is a very physical player." They can rebuild him. "He's a cyborg," Moffitt said, only half-joking. "He is the Terminator. If he ever gets a cut, be careful. His circuits will electrocute you. He doesn't bleed blood. It's just oil - WD40." Translation: Zeitler's focus, drive and determination to make himself into a great lineman make him seem more like a machine than a man. He should be a day one starter in the NFL.

There are a slew of MCM articles posted lately discussing our need for an upgrade on the line.

Article about our inability to run through the A gap: http://www.musiccitymiracles.com/2012/4/16/2952068/pff-tennessee-titans-and-the-annihilated-a-gap

Article where Munchak discusses their goal to continue to upgrade the offensive line:

Article about CJ getting a good amount of broken tackles despite our poor line play:

Below are two of more in-depth write ups on Zeitler. After reading these, who wouldn’t be pumped to get this guy?

A perfectionist, Zeitler expects more out of himself than anybody else could in class, the weight room and on the field. But it is opposing defenders who pay the price when the sum of his hard work pays off on the field. So, as expected, scouting reports show he does just about everything according to the book to his best ability -- and he has plenty of ability. Zeitler added a significant amount of lean mass in his college career and used it well. According NFL Draft Report statistics, he led college football with 142 knockdown blocks and had 33 blocks that resulted in touchdowns, obviously a major reason Wisconsin had a per-game average of 44.62 points and 467 total yards, including 237 on the ground.

As a run blocker, Zeitler is a pure road-grader. He can blast defensive linemen off the line of scrimmage and shove them aside to open up their gap. While he isn't the most athletic or mobile lineman, Zeitler was able to hit blocks on linebackers in the second level of the defense. He is a power blocker who wears down defensive linemen, and as a game progresses, he can be a key cog in owning the line of scrimmage.