Share All sharing options for: Tennessee Titans 2012 Schedule Released: Welcome Back to Primetime

The NFL mothership has released the full regular season schedule (full slate available here). After a year of shockingly anonymous 12:00 Sunday starts, the Titans finally managed to get back on the radar enough to get a few national spotlight games. The biggest one is against the Steelers, our former AFC Central foe and always a good match-up, on Thursday, October 11th. Baring any adjustment in flex scheduling, the only other primetime game will be against the Jets on Monday night, December 17th.

Full schedule and thoughts after the jump... 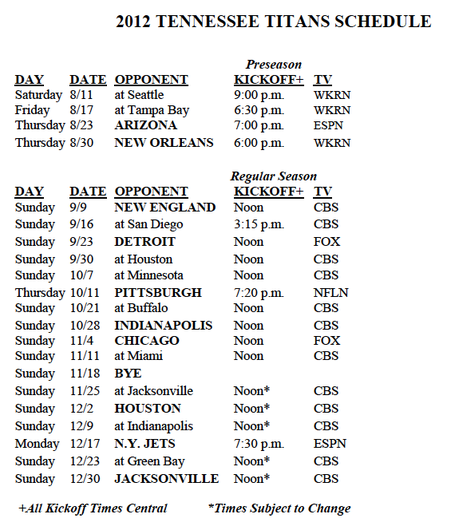 My first impressions on the schedule: oy vey. Opening the season by hosting New England is a tough draw, and the Titans are historically horrible out on the west coast, but especially so in San Diego. The only real break for us in this schedule is between weeks 7-12, where Chicago is the only team we'll play with a prayer for a postseason birth. The rest of it, especially the first half of the season, will be much harder than any stretch we saw last year.

As Jimmy has become so fond of saying this offseason: we could improve as a football team, and still win fewer games than last year.

But I'm sure he'd agree, as so many of us are fond of saying: LWSS.