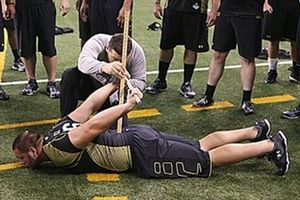 Titans_Firefighter breaks all the mock hearts of the 2012 mock draft by taking Konz two picks before the home team:

Bring on the Hate. lol

Well guess its my turn to make enemies of people on MCM by making this pick. Konz a fan favorite to take over the Center spot for the Titans gets taken just 2 picks for they are up. The Bears were a mess in the middle this past season without Kreutz, who was there for 13 years and 6 Pro Bowls '01-'06. They used Garza as center for the 2011 season, where he was ok, but better as a guard. The rock to Wisconsin's run game. Konz is athletic to a fault, pulls like a champ. He pulls like Matt Birk, which is a major asset in the Bears future running game. But he's really, really tall for a center. 6'5 is big. 6'5 is huge. By adding Konz to their already young line, they will mostly be set for the next 10 years. Also they drafted Konz teammate Carimi, who also fell to the Bears last year late in the 1st.

T- Webb (3rd) G- C. Williams (5th) C- Konz (R) G- Louis (4th) T- Carimi (2nd)
One thing that concerns me with Konz is that he missed some games due to injuries. Injuries have been an issue for the talented Wisconsin center, who suffered a blood clot in both lungs in 2009, a sprained ankle in 2010 and a dislocated ankle that forced him to miss the final few games of 2011. Konz was also forced to sit out at the combine and has yet to work out for pro teams, continuing his rehab on that ankle. This may be why he has slide down the draft board, but the more a good player slides the better the value they become when they are a 1st rd talent.
Another one of my concerns when I was reading about Konz is, there were a lot of times that the DL got under him, but he was able to use his hands to redirect and regain more control of the block. But once he gets up and attached, he's solid in leverage, has great hands. I think that's the primary physical asset the guy has, he's got great hands, a solid punch, and good leverage. Great hands. Great great hands and the ability to push his blocks into the second level. I think with more strength, he'll probably go from a starting, to a top notch interior linemen in a power running game. I think it's funny though, he was a tackle who moved inside to center because of his mental makeup and film-room-junkie mentality. I feel that last part is key to being a NFL center.


This was a very hard choice to make between him and Vinny Curry who would also be great talent for the 50th pick. The Bears will just have to hope that they can get a great value in a DE in the 3rd. Bears defense is getting old but they were able to extent Briggs and that could be key when it comes to drafting replacement for the most important area on the Bears D the LB core.