With the 48th pick of the 2012 Music City Miracles mock draft, the New England Patriots (represented by Big Tuna) select: 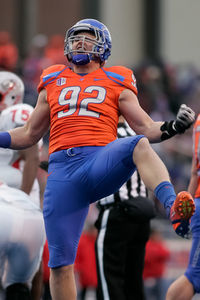 Shea McClellin is a guy that has been rising up draft boards so much that he has been invited, and will attend, the draft in New York City. While there is probably no way he lasts until this pick on draft day, the Patriots would be thrilled to see him fall this far. They were terrible on defense last season. McClellin will step right in and give them a thread as an edge rusher from the OLB position in the 3-4. This a good value pick, and we all know how much Belicheat loves those!

Now on the clock: -Erock and the San Diego Chargers