With the 47th pick of the 2012 Music City Miracles Mock Draft, the New York Jets (represented by E-Locker) select: 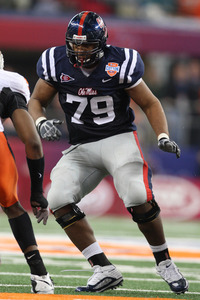 Was surprised to see Massie still on the board. He is a powerhouse at right tackle (6'6'' and 315 lbs) and that is exactly what the Jets need. The Jets got away from their roots last season because they couldn't run the ball and this pick solves that problem. CBS sports said, "Last season, despite playing on a 2-10 team that ranked 114th in the nation in total offense (281.25 ypg), Massie was credited with the key block in all 12 of the team's touchdown runs."

Massie can be a day 1 stater for the Jets at RT and instantly approve their run/wildcat game.

Now on the clock: z24lax and the New England Patriots